When a once-in-a-century ion storm threatens everyone in the Paulson Nebula, the Fourth Fleet must act quickly to save countless lives

In late 2399, what was initially reported as a virulent ion storm struck the Paulson Nebula. The whole region, rich with colonies, commerce, and industrial facilities, began to suffer interference in communications and warp travel. Warnings were issued for those travelling through the area, now at greater risk of becoming stranded and cut-off from help. Early study of the ion storm suggested it was oddly wide-spread, but the disruptions it caused made effective data-gathering difficult.

On January 2nd, 2400, the colony world of Coronal, deep within the Paulson Nebula, was struck by the ion storm with devastating effects. Particles of the nebula, usually highly dispersed, bonded with the atmosphere and rendered it toxic within a matter of days. With the storm cutting off most communications, colonists evacuated with whatever ships were nearby or they could contact in time – but it was not enough. Thousands perished.

Starfleet’s response has been immediate, bringing more resources to bear on the storm and those caught in its path. A regional state of emergency has been declared, with colonies and facilities deemed at-risk marked for evacuation. With the disruption to transport and communication, the damage the ion storm can wreak on ships and starbases, and the risk to planetary atmospheres, there is no telling how dangerous the storm might be.

Study of the so-called ‘Century Storm’ has provided only grim answers. Its seemingly uneven distribution through the nebula and the unpredictable nature of its ebbs and flows has been a major cause for concern. Some scientists even wondered if it had been artificially created or harnessed. Early research suggests the storm is natural – but no less deadly for it.

The few survey missions getting close enough to scan the deepest pockets of the storm have all detected the same thing: subspace rifts somewhere in the depths. Starfleet Research believes the tachyon radiation of these rifts has somehow agitated the nebula particles to cause the storm. The seemingly random location of the rifts would account for the ion storm’s rapid manifestation and its unpredictable patterns, especially in a nebula light-years wide.

But even if these rifts can be closed and the storm dissipated, that will take time – and the effects may not be felt right away. In the meantime there are worlds in danger, colonists needing relocating, refugees in need of new homes. The Fourth Fleet has been assigned to respond to this state of emergency with the Stormbreaker Campaign, Starfleet issuing the following orders:

– Evacuate worlds, facilities, and ships caught in the path of the storm.
– Shield worlds and facilities that can weather the storm with technological support.
– Escort refugee convoys and protect under-defended facilities against pirate activity.
– Support resettlement projects to find permanent or temporary homes for refugees.
– Gather data on the nature of the storm.
– Close subspace rifts fuelling the storm.

The Respond protocol refers to Stormbreaker’s emergency first response. This consists of all humanitarian endeavours within the Paulson Nebula and the storm itself: answering distress calls, rescuing ships, evacuating planets and facilities, building shielding measures, and protecting all such missions.

The Resettle protocol is the first step in the mid-to-long term reaction to the storm. While some inhabitants of the Paulson Nebula have only been temporarily relocated with the expectation they will return once the danger has passed, the homes and livelihoods of others have been irrevocably damaged. Starfleet must find homes for all such people, temporary and permanent. The activities of the Resettle protocol are those which occur beyond the Paulson Nebula itself: first support for refugees at facilities such as Starbase Bravo, the construction and resettlement of refugees on safe worlds and territories, and negotiation with planets across the Federation to provide more permanent homes.

The Resolve protocol covers assignments seeking to end the storm, as a freak occurrence still not-entirely understood by Starfleet. Subspace rifts have opened across the Paulson Nebula, seemingly at random, and radiation emanating from the other side has agitated the nebula particles to cause this storm. Initial efforts to close the rifts have met with limited success, though ships making the attempt have reported a myriad of odd experiences as the rifts exert pressure on the fabric of space-time. The activities of the Resolve protocol seek the following: to gather scientific data on the storm, to learn more of the subspace rifts seemingly causing it, and to close the rifts.

The Stormbreaker Campaign is a series of independent stories all contributing to the greater narrative. Writers will write the stories of their ships and crews responding to the crisis, and the Lore Office will respond to these and advance the campaign’s events.

Any member is welcome to participate in Stormbreaker. If you have an avatar ship, you can write the story of your starship and crew responding to the situation in the Paulson Nebula. If you are still a junior officer, you may write about your character(s) undertaking a runabout mission from Starbase Bravo. Either way, you can start a Mission on BFMS under the Stormbreaker Campaign fleet-wide Mission. If you want to write with another member, you can do so! Your ships or runabouts or characters can work together on missions. BFMS supports this.

The following are some simple premises for stories and plot beats to consider in this phase. They can help you get started, and are free for everyone to use – and maybe put your own spin on it!

– A Federation science station in the path of the storm is planning to survey the phenomenon from inside. The scientists refuse to leave their posts citing the information that they gain will be invaluable. If their plan is to work, the physical structure of the station will need to be reinforced and the shields significantly uprated – all before the storm hits…

– Straight-forward evacuation mission: A world is projected to be hit by the storm and although the inhabitants are willing to be evacuated, time is the pressing factor here – organise and marshal the planetary populace, board the evacuation ships and get out of the sector before the storm disrupts local warp travel…

– Similar to the above – a populated world is in the path of the storm – but the sheer number of inhabitants vastly outnumbers the capacity of the evacuation vessels. How could you possibly decide who gets to leave and who gets left behind? How do you break that to the populace? What is their response? Are there any other options available?

– SCE have provided plans to create a protective ‘net’ of replicated shield generators which when linked together and resonating at a specified frequency is expected to delay or perhaps redirect the advance of the storm. The individual shield generators will need to be replicated, positioned and activated as the storm approaches… Is there enough time to set up and activate the net? Does the warp disruption prevent your ship’s escape? Does the plan work?

– A Starfleet vessel has evacuated an orbital facility or planet-side base but has been caught in the storm attempting to retreat, incurring structural damage and disrupting warp travel. As the commander of the nearest vessel, are you able to support? Can you find a way to rescue the stricken ship, her crew and passengers before it is torn apart by the storm? And even if that can be achieved, how can you ensure that the same thing doesn’t happen to your ship?

– Your ship has been dispatched to close one of the subspace rifts believed to be causing the nebula. Modifications to the deflector dish and warp core must be undertaken to manipulate the rift, but on arrival, the crew begins to experience strange temporal effects. With the rift’s pressure on space-time warping the area around it, can you overcome these to complete the mission?

There are, of course, many possible stories. If you need help coming up with ideas – especially for junior officers – please contact the Lore Office! The storm’s effects are intentionally quite vague and varied; because this is a freak phenomenon, different pockets may be more extreme, or what works in one part of the nebula may not work in another. Likewise for the subspace rifts; these are likely an after-effect of the Omega Crisis of 2399 (though under no circumstances will Omega be detected). More than just a scientific challenge, the subspace rifts are a chance to play around with the odd effects of stellar phenomenon, as-seen in episodes like Cause and Effect or Parallels (though you are not forced for them to be so extreme).

Members without their Command often ask how they can get involved in Campaigns and Fleet Action plots. The good news is, it’s really easy with Stormbreaker, because the Paulson Nebula, the Century Storm, and the whole Campaign are all on the front door of Starbase Bravo.

Not only are runabout teams sent from the station to respond to all of the crises above, but Starbase Bravo is the last stop into the nebula, and the first stop out. Starships heading in will be docking, engineering teams locked in races against time to modify their systems to contend with the challenges of the Century Storm. And on the way out will be fraught ships, desperate refugees, and others fleeing the terrible effects of this phenomenon.

Members of Starbase Bravo, together or alone, can write about the influx of displaced and traumatised people who need shelter, comfort, medical support; about the tension on the starbase as crews come and go to face and recover from the challenges; or even be sent on their own runabout missions into the nebula. And if you don’t have your own Command and aren’t a member of Starbase Bravo, you can still take up one of the many runabouts, and face the storm. 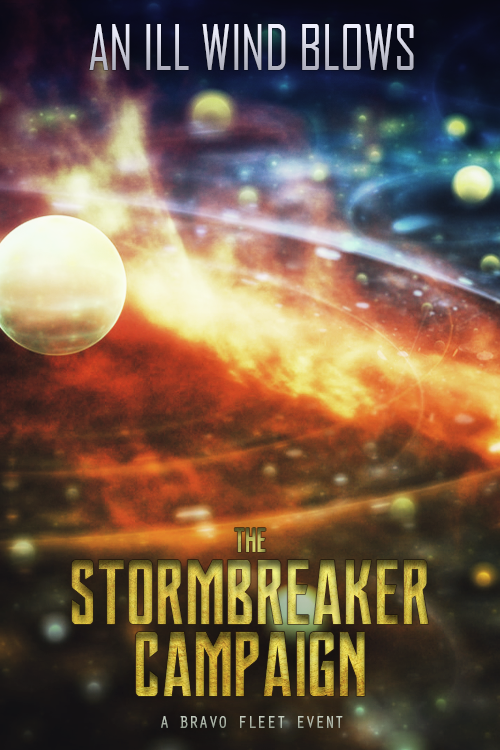 One of the things Vice Admiral Seagraves had learned early on in her tenure as Director of Fourth Fleet Operations is that there was no “normal” when it came to Starfleet, not when the positioning of a hundred or so starships operating out of a dozen or so stations to accomplish two or three [...]

‘We apologise for the delay, Captain Garza -’ Miguel Garza’s jaw tightened as the comms officer’s voice pierced the hours-long wait in his cockpit. ‘I don’t want an apology, Ensign. I want permission to depart.’ ‘And as I’ve explained, I don’t have authority to grant that. But [...]

At just before four in the morning, a low but incessant beeping filled the darkened bedroom. The tone was not in itself an urgent one, but the fact that it continued unabated until answered implied its importance. The prone figure on the bed gave a long, low, growl of resignation. “What is it?” [...]