The Arcturus is an Odyssey-class starship originally built with special modifications to handle leading long-range exploratory missions in the Delta Quadrant, though she has also seen brief service along the Breen border in the Alpha Quadrant. While launched under the command of then-Commodore Elizabeth Hayden, Captain Michael Lancaster assumed command in mid-2399 following her promotion to rear admiral. The ship continues to be Admiral Hayden’s flagship and has resumed her original exploratory mission in the Delta Quadrant.

The Arcturus has a crew of 2,500, among whom are a far larger number of senior officers than most other starships, including four officers holding the substantive rank of captain, serving as commanding officer, executive officer, captain of engineering, and captain of medicine. The ship is a flying starbase, carrying with it a fleet of runabouts and its own support vessel, the USS Hokule’a, an Aquarius-class light escort docked in a stern cradle. She supports a handful of smaller starships also assigned to Admiral Hayden’s long-distance exploratory mission, providing crew recreation opportunities as well as resupply. 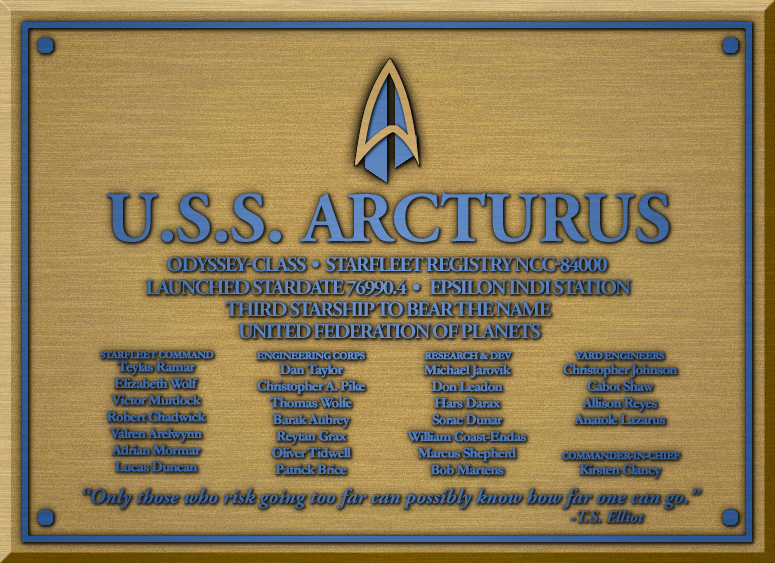 Starships to Bear the Name Arcturus

Stories associated with this command may include up to the equivalent of a 222 on the RPG ratings scale, and are intended for mature audiences. 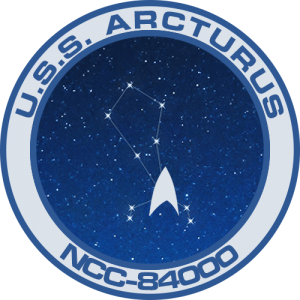 USS Arcturus: Eyes in the Dark

After detaching from Arcturus, Hokule’a made a graceful loop to arc towards the surface of Omicron Uhurae III, her inactive nacelles tucked up against her wedge-shaped hull in preparation for landing. Scans of the iridescent and hazy blue world had discovered large quantities of blood dilithium, [...]

Chief Medical Officer’s Log, Stardate 77416.6.   The vast majority of our patients have been transported to temporary facilities on the planet’s surface or to the dedicated hospital ship that has joined us in orbit of Gamma Sagittarii III, so I have been able to turn my attention fully to [...]

Captain Lancaster was ensconced with a dozen reports at the table in his office, his dinner pushed aside and untouched. The ship was close to being able to depart and resume course for the remainder of the convoy, but there were still loose ends to tie up and a few hundred more refugees to get [...]

There had been some work for Galan in managing the various handshakes between Arcturus and the remaining functional transporter rooms on Cardinal 1, but once the runabouts were off the deck and the evacuation was proceeding in earnest, he was able to leave his post and get some much-needed rest, or [...]