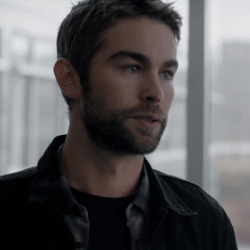 Commander Michael Lancaster is an experienced operations officer and engineer, having served aboard the USS Lancelot for seven years before spending two years leading a project at the Starfleet Communications Research Facility. He is brilliant but acerbic. To him success means perfection, both from himself and his subordinates, and he is the very model of a tyrannical martinet in his reverence for rules and protocol. This is is first assignment as Executive Officer.

Lancaster was born on Earth in Seattle, Washington, on Earth’s cosmopolitan North American continent. His parents were both academics, so he was afforded one of the best educations available to any Federation citizen, being enrolled in the Seattle Magnate Classical Academy. Because he was an only child and because his parents were frequently traveling to various conferences and colloquia, he developed a rather independent sort of personality as a small child. This persisted into his school years, where he favored books and studying to playing with children his age.

Because of his devotion to academics, he easily made the best marks in his school and was earmarked for Starfleet service. Though he had the choice of any number of academic offerings, he chose Starfleet because it offered him the opportunity to explore other planets, and to be among the best of the best in the Federation; it was widely known that only the very brightest would ever receive an appointment to Starfleet Academy itself. After easily passing the admissions tests, he matriculated to Starfleet Academy in the Fall of 2373, the same year in which the conflict with the Dominion broke out, though it was never expected by anyone on Earth to reach the heights that it did.

The Academy was a bit of a culture shock for him, as he was simply not used to dealing with so many people. While he had been able to force isolation on himself in high school, he was unable to at the academy due to the leadership training requirements. He coped, but he did so by developing a fierce wit and employing his intelligence in a rather direct, abrupt style with his peers. This was perceived as arrogance, but it was really a sort of coping mechanism for his self-doubts. While he knew he was smart, he was very unsure of himself in other areas, such as physical fitness and socialization, despite the fact that he was handsome.

As a Cadet, Lancaster was noted by his instructors as being extremely intelligent, but also incredibly reserved in social situations by his instructors and peer leaders. When forced to interact with other cadets, these traits manifested in an arrogance designed to avoid too much socialization, but his personality profile was not particularly abnormal for students of his age and background. He was commended several times for his academic work, and maintained a perfect grade point average during his tenure at Starfleet Academy, and proved to be a proficient member of the Academy Track and Field Team, winning the Academy Marathon as a sophomore.

His real talent for numbers and efficiency was realized at the academy, where he received training in both science and engineering, in addition to starship flight training, earmarking him for duty as a bridge Operations Manager. By the time he graduated, he was able to calculate the variables necessary to take a ship into warp in his head, and had most of Starfleet’s regulations memorized. The academy continued to be academically stimulating but a social challenge for most of his time there.

Lancaster was admitted to Gold Squadron, a special group for the most talented engineering and operations cadets at the Academy, which allowed him access to special labs and several excursions to stations around the core worlds, including Memory Alpha.

Between cadets’ junior and senior years, they were assigned to midshipman cruises to formalize their training in starship operations. Lancaster was assigned to the starship ”Republic” as Cadet Chief Operations Officer, in recognition of his extremely high aptitude scores. Though he was shown to dislike socialization, he managed to maintain the necessary communication skills to direct others efficiently, albeit in a rather curt manner.

Upon graduation as an Ensign, he was posted to the Sagan as Chief Operations Officer, for the ship’s mission to the Beta Quadrant. He received several commendations for efficiency in this posting, and the vessel’s small crew made it easier for him to fit into the social dynamic. While aboard the science vessel, he worked towards finishing graduate coursework and a thesis on Quantum Electrodynamics, the same field that he specialized in as an undergraduate cadet for the engineering portion of his degree.

Lancaster was also either a part of or the leader of several landing party missions of both an exploratory and engineering nature, helping with missions ranging from planetary and stellar surveys to humanitarian and law enforcement endeavors. Just one year into the mission, he was promoted to Lieutenant, J.G., in recognition for his highly satisfactory performance reviews. At the conclusion of that vessel’s three-year mission, he was assigned to the Intrepid, which was mainly assigned to courier and patrol missions within Federation space. After two years of satisfactory service in that role, he was promoted to full Lieutenant.

In 2392, he was transferred to the Lancelot, a Nebula-class starship, due to his proficiency at operations. He was again commended for efficiency but had significant difficulties integrating himself among the already well-established crew, coming into conflict over jurisdictional matters specifically with the Marine Detachment Commanding Officer and Chief Engineering Officer, on several occasions.

He participated in a number of classified missions during his time on the vessel, including a cloaked mission to rescue the Omaha from Romulan space, and then a humanitarian mission to a colony world of that empire. At the conclusion of his second mission aboard the Lancelot, the ship enjoyed a period of shore leave on Deep Space Eight, where he began to cultivate a romance with one of the ship’s new nurses, then-Lieutenant J.G. Jacob Sheppard, with whom he’d shared a few dates during the vessel’s previous visit to the space station.

At the conclusion of that second mission, he alone of the senior staff rejected an invitation from Captain Smith to become part of an illegal expedition to exact vengeance from a Federation terrorist group, and was forced to take command of the Lancelot and pursue the rest of the senior officers.

He was successful in doing so, though the other officers did not face a general court-martial, and was promoted to Lieutenant Commander, assuming the additional duty of Second Officer, in recognition for his successful handling of general starship business, with the absence of command staff, though this did not do anything to help him successfully integrate into the crew.

What did help him integrate, though, was his blossoming romance with Sheppard, who was nearly his opposite in terms of personality. It was the sort of instant attraction that Lancaster had ruefully hoped that he would never have to experience, but they clicked immediately. Sheppard was the one person in the universe who was able to moderate Lancaster’s personality and he gave Lancaster the stability and support that he didn’t even know he’d been craving.

After they’d been dating for about a year, the Lancelot was ordered to intercept and defeat a group of rogue changeling which was intent on sabotaging Federation-Romulan relations by forcing the two powers into an armed conflict. Lancaster led an away team to discover the source of a power signature detected on a planet near the neutral zone, only to find that it was emanating from a hidden starship. Lancaster and his team were captured by the Romulans at the behest of one of the changelings and was interrogated brutally by a Tal-Shiar agent, though he did not give up any information, and was eventually able to effect an escape by ordering his security officer to punch him in the face to lure their guards into the area in which they were being held.

The emotional and physical recovery from this ordeal took quite a while–the interrogation itself had left some nasty scars that had to be repaired, but mostly he was mortified that he’d let his team down by getting them captured. He withdrew and began pushing people away again, until one of his team members, a very junior engineer whom he had actually chastised many times for her poor work, convinced him to see that he’d done his best. It was after that episode that he and Sheppard decided to move into shared quarters.

Two years later, Sheppard was called away with the captain, first officers, and a few others from the Lancelot, leaving Lancaster in command of the ship once again, with orders to maintain her patrol station along the Romulan neutral zone. During this period, however, contact was lost with their transport and Lancaster ordered an immediate rescue mission, discovering that the ship had accidentally passed into a star system that had been cloaked by the Preservers to conceal a planet containing Bronze Age Mycenean Greeks. The ship had crashed when it was fired on by a Preserver obelisk, which Lancaster was forced to destroy to rescue his people. The Lancelot narrowly escaped when the Preserver defense systems reconfigured themselves and transported the entire star system out of the known galaxy to parts unknown.

Following this, Lancaster realized that he couldn’t cope without Sheppard in his life and proposed to him, an offer he accepted on the spot, though it would be a long engagement. Sheppard was offered a spot at the Starfleet Medical Academy shortly after this, but without telling Lancaster, he declined it in favor of long-distance learning, so that they could stay together, so In 2395, when Lancaster was promoted to the rank of Commander but declined promotion in role to Executive Officer in favor of being able to spend more time with Sheppard, as a sort of revenge, though they quickly got past the small rift that caused.

After two more years serving together aboard the ship, the Lancelot was recalled for a major refit, which allowed Sheppard to begin his residency at Starfleet Medical. Lancaster was posted to the Starfleet Communications Research Facility in San Francisco, assigned to lead Project Smoke Signal, which was working on finalizing the design of a special communication system for use on the new Odyssey-class starships.

Living in San Francisco only served to strengthen their relationship, and they were able to develop a circle of friends and regular activities around the city. In the over two years they ended up living there, they also managed to travel to a different place on Earth every other weekend together. In mid-2398, they finally married in a small, private ceremony with their two families, and for the first time in his life, Lancaster found himself to be truly happy.

In late 2399, however, they were both offered positions aboard the brand-new USS Arcturus for her seven-year mission exploring the Delta Quadrant, Lancaster as Executive Officer and the newly-promoted Sheppard as one of the ship’s medical officers. It was the sort of dream assignment that both of them had always hoped for, but they weren’t sure if they were ready to give up their shorebound life. In the end, both of them agreed that they didn’t want to be the impetus for holding each other’s careers back and that if they were ever going to go on that kind of adventure, they wanted to do it together.