Ships are detecting Omega molecules all over the galaxy. Within a matter of days, Starfleet has recognised this as a crisis threatening all interstellar communities, and has activated the Omega Directive fleet-wide.

While Omega molecules are capable of producing vast energy, their destabilisation destroys subspace, rendering warp travel or rapid interstellar communication impossible. On a vast enough scale whole sectors could be denied warp travel, cutting worlds off from the rest of the galaxy or stranding ships in deep space. Destabilisation of Omega in the wrong place could condemn millions to death and have untold social and political ramifications.

The activation of the Omega Directive supersedes all current assignments and general orders; even the Prime Directive has been suspended while the crisis is confronted. Due to its volatility, knowledge of the Omega molecules is strictly classified: only Starfleet starship commanders and their superiors are briefed on its existence and the protocols to destroy it. Civilians, representatives of foreign governments, or even the crews of responding starships may not be fully briefed, even as their cooperation is sought.

Wherever Omega is found, Starfleet ships must destroy the molecules or secure the region until reinforcements arrive who can. This puts the 4th Fleet, the most widespread rapid response unit in Starfleet, at the forefront of the crisis. Their starships’ orders are as follow:

– To detect and identify outbreaks of Omega across the galaxy.
– To secure regions where Omega is detected to minimise the consequences of destabilisation. This includes preventing all non-emergency travel through the area and, where possible, the evacuation of local populations.
– To destroy Omega when possible, or monitor outbreaks until the arrival of a capable unit.
– To maintain secrecy of Omega, and not allow knowledge of its existence to fall into the hands of non-authorised personnel.
– To take any and all necessary measures to combat the crisis. The Omega Directive supersedes all General Orders, including the Prime Directive.

Echoes of the Tkon: Omega is a series of independent stories all contributing to the greater narrative. Writers will write the stories of their ships and crews responding to the crisis, and the Lore Office will respond to these and advance the Fleet Action’s events.

Any member is welcome to participate in Echoes of the Tkon. If you have an avatar ship, you can write the story of your starship and crew responding to an outbreak of Omega. If you are still a junior officer, you may write about your character(s) undertaking a runabout mission from your Task Force Headquarters. Either way, you can start a Mission on BFMS under the Echoes of the Tkon: Omega fleet-wide Mission. If you want to write with a member, you can do so! Your ships or runabouts or characters can work together on missions. BFMS supports this.

If you want to write something other than Starfleet operations, please consult the Lore Office. The focus of the Fleet Action is the 4th Fleet and its adventures. This is particularly relevant where non-Starfleet characters should never find out about Omega.

It is essential to note that Phase 1: Omega will last three weeks for fiction-writing. On August 14th, Phase 2 will begin with the next stage of the story. You should think about the time you can commit to writing, and aim to finish writing Phase 1 within the period. Phase 1 is solely focused on Omega; a good end-point for these three weeks is your ship destroying the molecules they’ve detected, or a specialist team arriving to do so. The next Phase will focus on why this has happened, and the discovery/response.

So be sensible about your scope! Do you just want to write one punchy short story about a ship discovering and destroying Omega wherever they find it? Or perhaps covering the process in a chapter a week (a simple arc of discovery, rising tension, resolution). If you want more twists and turns, there are means of putting more meat on the bones: tensions among a crew kept in the dark, the challenges of managing civilians, setbacks as a starship has to jerry-rig means of destroying Omega without ideal equipment.

Make your plans and then write accordingly. If you end up in a pickle, with the end of the phase looming and your resolution still not to hand, an easy solution is for a specialist Starfleet team formed to destroy Omega to quickly arrive and relieve the ship. Or, perhaps, the volatile Omega molecules destabilise, forcing the ship to jump to warp and abandon the region to its fate without subspace. As ever, the Lore Office will happily provide support, feedback, and suggestions if you find you’ve bitten off more than you can chew.

In the meantime, Happy Omega Hunting!

The following are some simple premises for stories and plot beats to consider in this phase. They can help you get started, and are free for everyone to use – and maybe put your own spin on it!

– Going about its duties, a Starfleet ship suddenly detects Omega. With no specialist team nearby, the captain must destroy Omega using only the resources to hand.
– A Starfleet ship has detected Omega, but lacks the resources to destroy it. They must monitor the situation until able reinforcements arrive, and provide assistance.
– Omega has been detected near a small colony, and Starfleet must evacuate the inhabitants in case the molecules destabilise and strand them – without explaining why.
– A runabout team has received mysterious orders to clear a region of all traffic, and are authorised to use force if necessary to stop travellers. As above, the civilians cannot be given an explanation – and in this case, the officers don’t have one.
– A Starfleet captain receives orders for their ship to report to an outbreak of Omega, take over from an older vessel monitoring the situation, and destroy the Omega.
– Across all stories, a driving tension is the secrecy of the Omega Directive. Officers will be given orders they do not understand, and captains must make demands of their crew and civilians they cannot explain.
– With all general orders lifted, a Starfleet captain can take any measures necessary to destroy Omega, even breaking the Prime Directive. How will they deal with such responsibility? How will their crew deal with such orders?

There are, of course, many more possible stories. If you need help coming up with ideas – especially for junior officers – please contact the Lore Office! For more information on the Omega Directive and the nature of and means of destroying Omega molecules, check our wiki article.

Because Omega is being detected all over the galaxy, it’s really easy to get into the action! As a threat it supersedes all standing and general orders, so whatever a ship is doing anywhere, it should divert its attention to respond to Omega. This means you don’t have to write your ship travelling to a crisis or receiving orders; this plot can crash into whatever story you’re already telling. It’s worth considering this as you have a narrow (3 week) window in which to tell your story: get to the action quickly!

Members without their own Command might on the surface have a harder time of writing a story. After all, you’re not writing a starship captain privy to the secrets of the Omega Directive, and you’re restricted to runabout missions launched from a command ship or starbase.

But Omega particles can spring up near a Task Force HQ, and there are still lots of ways runabout teams can respond to this. They can try to keep civilians away from danger, or try to evacuate them. They might have to run scans of a region and report back with their findings, even if they don’t understand what it’s for. Starfleet ships will be rushing to lots of regions – like the deployment along the Cardassian border – and that could cause all sorts of local upset as allies and enemies alike see starships showing up in force and don’t understand why. Starships need protecting, civilians need shepherding, allies need reassuring and enemies need warding off. Even without destroying Omega, there are lots of options for any runabout team setting off from a Task Force HQ. 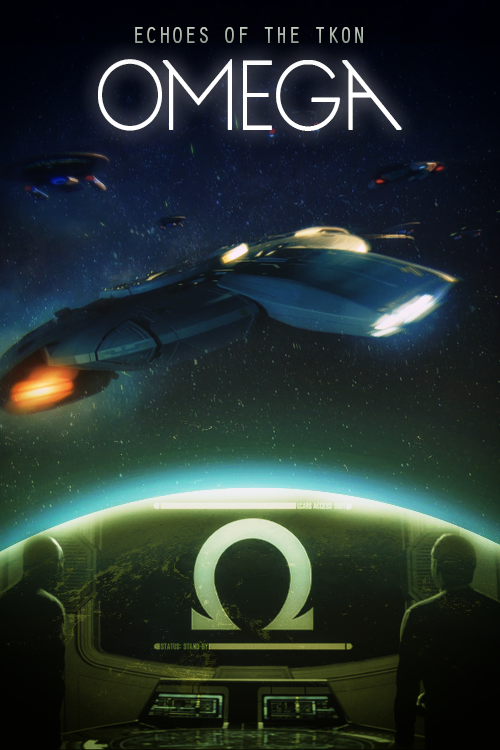