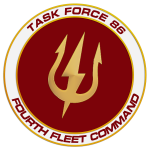 It’s been a long road, making our way through the year. It’s been a long road, but the year is finally clear. Questionable theme tunes aside, 2021 has been a great year for Task Force 86! We’ve laughed, we’ve cried, we’ve seen two fleet actions come and go. We’ve seen staff depart (who will be sorely missed) and we’ve greeted more than a few new faces on Starbase 86. It’s been a competitive year, too, full of ribbons, medals, and competitions hosted by us; the shiny red multi-pronged task force.

But, as Vic Fontaine and Sisko once sang, the best is yet to come. The hype train is again leaving the station for the Stormbreaker Campaign that’s due to start on Feb 5th. I can’t wait to see the kind of stories TF86 will be weaving for this one. If it’s anything like our previous efforts, then we should be bracing ourselves for anything from pirate subspace radio stations to space whales.

Speaking of which (and it’s been far too long since I have last done this) let’s get up to speed on where the ships of the task force are as the 25th Century dawns on the Bravo Fleet universe.

Since the end of the Echoes of the Tkon Fleet Action, we’ve still had plenty of action going on that deserves to be spotlighted! Here’s a list of our current Task Force high achievers, and what they’ve been up to:

I think that just about sums up goings on in the Task Force of late. It’s been great to see so much fiction being produced, and it’s been a good laugh having such a lively bunch of you around to spice up the Discord. Our next big adventure as we move into 2022 will be the Stormbreaker Campaign. This will no doubt be an excellent opportunity for our longstanding members to tell their tales, game away, and clock up some more activity points! For our newcomers, it represents a great way to cut your teeth and see what it’s all about.

Stock up on snacks, caffeine, or whatever writing/gaming fuel you need because come February 5th things are about to get real.