“I will not leave my home, but be with the spirits among the rocks, the waterfalls, in the rivers and in the winds; wherever you go I will be with you.” ~ Chief Tenaya 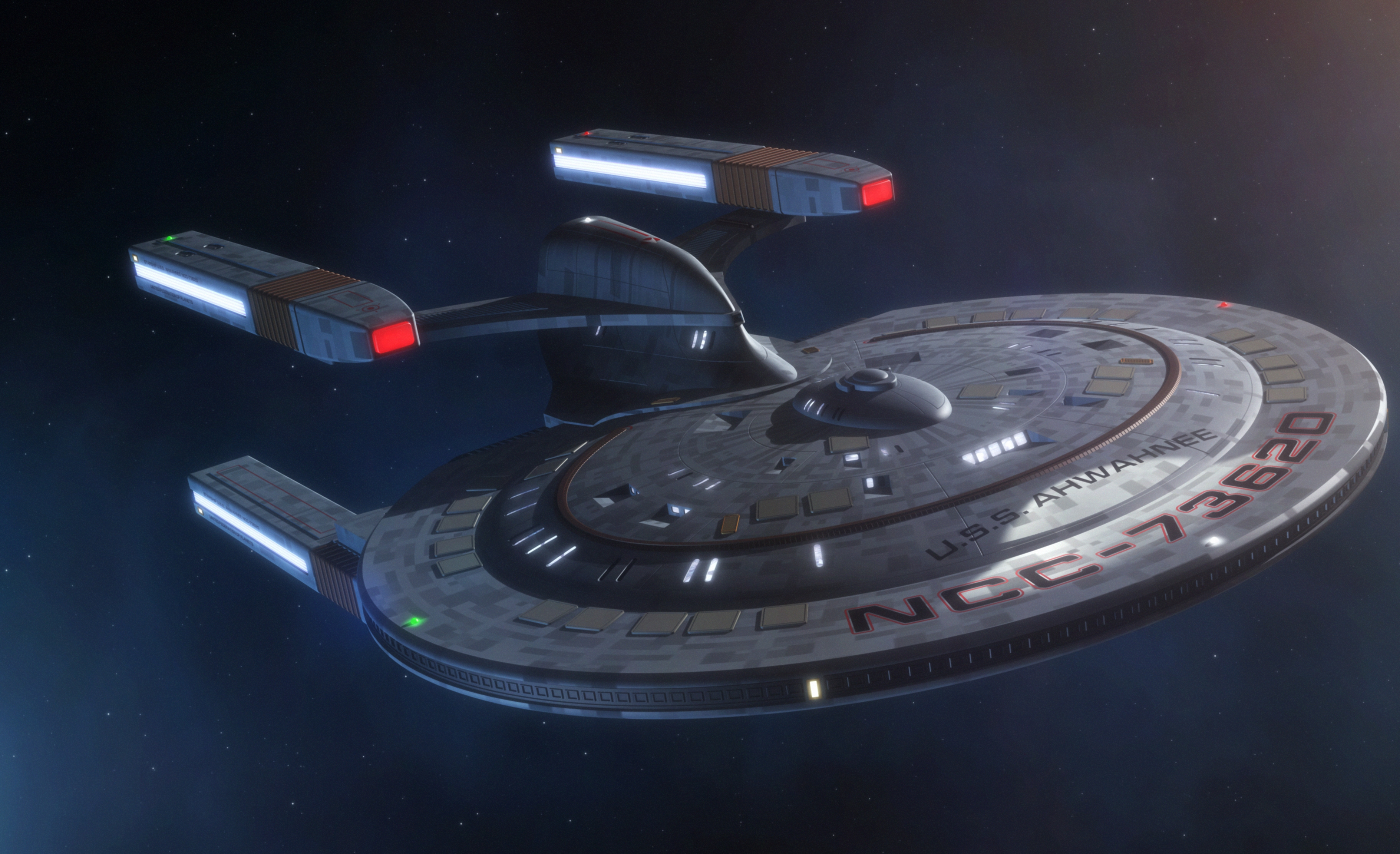 Once occupying the Yosemite Valley of Earth’s North American continent, “The Ahwahneechees had been a large and powerful tribe, but by means of wars, and fatal black sickness, nearly all had been destroyed, and the survivors of the band fled from the valley.” (Chief Tenaya, 1858). Their story echoes through time over five centuries later, and the ship that bears their name is itself no stranger to survival.

In service for over 40 years, the USS Ahwahnee has seen action at some pivotal moments for Starfleet. Most famously, she’s known as the only ship to have been salvaged and repaired after the battle of Wolf 359. The loss of three quarters of her crew on that fateful day in 2367 has cast a long shadow over her time in service. Some say her decks are haunted, others say she is simply ageing. Many an officer has noticed a creaky bulkhead here and there or an odd pulsating from the warp core. Sometimes, when it’s getting late on a quiet shift, your thoughts might be drawn to those who wandered her corridors all those years ago.

On that day of confrontation, braves stood their ground against a collective evil dredged from the blackest places of the universe. Those who manned their stations did not falter when that unrelenting force was rained down upon them. The disembodied voice echoed everywhere. It came from the conduits, crawl spaces and from the very deck plating on which they stood. Ruthless and single-minded, it informed them of the futility of their existence. Their loves, pains and stories; all irrelevant. All would be simply absorbed into an ocean of consciousness and erased. Some survived, many didn’t. None became prey.

There were calls to scrap the heavily damaged space frame, but others recognised the symbolic potential she presented. Now the Ahwahnee guards the spirits of those that were lost aboard her.    Serving aboard a Cheyenne class vessel is far from the most prestigious assignment available. Those looking to build prestige and advance their careers, as Starfleet officers often are, might initially consider such a posting beneath them. There exists a great many in the fleet, however, who understand what the Ahwahnee represents. Having faced war, disaster and the extremes of galactic brutality, still she presses on. In a rapidly changing galaxy, she serves as quiet reminder of Federation ideals and perseverance against adversity. Those who serve aboard her carry a thoughtful awareness of this as, without fanfare or undue ceremony, they continue their duty.

So it was that Felrak Vordenna, an officer with his own long and storied career in Starfleet, became her sixth captain. He undertakes his role with the solemn sincerity he has become known for. Despite his lack of human ancestry, he feels connected to the North American continent on Earth. Twenty-eight years of living in San Francisco, and a further five aboard the USS Yosemite, have given him ample time to learn of the indigenous people who once lived in harmony with the land. He can’t help but be reminded of his own culture’s reverence for nature, and the historical difficulties that humans once faced in preserving their own biosphere. Like the Ahwahneechee of old, humans looked outward from their ravaged home, ensuring their survival long into the future. The USS Ahwahnee, a product of this future, would ensure their ideals would survive longer still.

Arms cannot span This mountain distance -it is thornbush And grey, and vast, But stones cast, Do rattle and clap, Far into the deep earth, One for you, one for you, All of this for you, Flung from the bottom to the top, Through the sun   Sirens blared a wounded howl. Orange skies were pastel [...]

話說天下大勢，分久必合，合久必分。 “The Empire, long divided, must unite; long united, must divide. Thus it has ever been.” – Luo Guanzhong   The krala beetles whined. The sun rolled round. Its rays filtered through the mangrove leaves and baked the swamp earth into [...]

The alarm sounded frantic. Delfino, having punched in what felt like (and quite possibly was) the thousandth set of coordinates, was abruptly shaken from her mental glaze. It took a few seconds for her to interpret the readings, and another few to verbalise what she saw in front of [...]

Tyrothan’s mottled grey skin was streaked with a dull ochre. He tried his best to scrub it off, undeterred by the futility of the task. Perhaps this time would be different? This sonic shower was certainly new. Since entering the mines, the only respite from the filth and choking dust was the ice [...]