Part of USS Denver: Mission 1: Flight of the Valkyries

A Chance Meeting? I think not – Zebulon Pike

A man and woman entered the bar and stopped at the entrance and scanned their surroundings.   The woman leaned into the man and said something to him, and they approached Jolie sitting at the bar.

The man sat down next to Joile while the woman hung back with her arms crossed in front of her.  “Whiskey, neat,” the man said as he settled into his seat.

He was in his early forties. He wore a beat-up grey cowboy hat now more tan than anything with the crown partially crushed from years of abuse.  There was a dark brown sweat stain where the crown met the brim, and a turkey feather was shoved into the brim.

He wore a dirty brown canvas duster over a button-up shirt and a pair of blue jeans and a pair of scuffed cowboy boots.  And after he sat the duster fell open to reveal an old-fashioned cowboy-type pistol sitting low on his hip in the gunfighter style.

The woman was the opposite.   She was about his age but looked a good five to ten years younger than him. She was fashionable and would have fit in in New York or Paris with her sleek black sheath dress and black pumps with a modest heel.  There was a delicate necklace made of platinum around her neck with a chunk polished dilithium set into the pendant.

The bartender set the whiskey before the man, but he didn’t touch it.  “Lieutenant Kyo,” he said without looking at her,  “A little birdie told me you’re looking for a home.  I’m rebuilding my team.”

Jolie heard the man speak to her, but she kept her head down, thinking about what she had done this time to be taken from another mission. Perhaps it was just her luck, or perhaps it was the curse that had followed her from Earth.

“Are you positive that I am the little birdie that you were notified of?” she inquired without looking at the man, as she remained immobile and mostly inside herself.

“Your parents served with my mom… well, step-mom.  I have a hole that needs filling.  My wife is pregnant and she probably shouldn’t be going on missions.  I’m Commander Ethan Talon, and this is my wife Lt. Commander Trinity Morris-Talon.  We run a small special operations team.  A lot of it is covert intelligence for SI, and other missions involve us doing things no normal Starfleet away team would even consider doing.”

Trinity relaxed and sat down on the other side of Jolie which raised her skirt up slightly to reveal a phaser pistol strapped to her calf. “It’s not standard Starfleet work.  You won’t get any medals, and you certainly won’t get a pat on the back for a job well done.  You’ll see the worst of sentient lifeforms,  and a good job means nobody knows you were involved.”

Jolie had seen everything that was going on around her even though she wasn’t moving. However, she was taken aback by the phaser that was strapped to the woman’s calf; this was not “Starfleet’s Standard” weapon location. She’d known the instant Ethan revealed that Trinity was pregnant by the way she held herself, even though she herself never had the chance to become a mother, yet.

When Ethan said she wouldn’t be recognized for being involved in things that could potentially improve things for the Federation, she tilted her head to look at him. When she gazed at him, her light brown eyes nearly appeared to have an amber ring around the iris. “Tell me more, Commander Talon,” she said, having recognized him for his last name.

“That’s pretty much it. We make Hazard Teams look like they are playing dress-up,”  Trinity said. “Oh, uh…” she replied to the bartender,  “Synthohol dry martini.”

Ethan cleared his throat and dug into his breast pocket of his duster and set a black “half” pip on the bar in front of her   ” We don’t really follow rank, and as you can tell uniforms aren’t our go-to wardrobe choice, but if you accept I suppose you can pin that to your dress uniform.”

Looking down at the red uniform she wore, she smirked, and thought to herself, ‘Looks like I am going to need to go shopping.’ as the Commander laid the pip in front of her

Jolie picked up the black half-pip and it rolled into the center of her palm, “Well since I won’t be recognized for anything else at least my mother and father will see that I became Lieutenant Commander if nothing else,” she stated as she placed the black pip next to the two silver ones on her chest. “Where do I need to go and how long do I have?” She asked as she looked up from the black pip.

“Our ship is in orbit, and we have training on Vulcan slated for the end of the week,” Ethan said. “As my second in command, I expect you to lead by example.”

With a couple of nods, Jolie stood up, and offer her right hand.

Ethan took her hand in his massive paw and shook.

“I’ll see you in orbit Commander,” she stated as she shook the Commanders hand. Turning she looked at Trinity and with as gracious of a smile that she could muster smiled at the woman. “I hope that I see you again,” she stated, “if not then it has been a pleasure.”

“I’ll be around,” Trinity said with a smile.  “I’m just not going out on missions anymore.  Oh,” she started and dug through her purse and withdrew a PADD  handing it to Jolie.  “You probably want the specs on your new assignment.” 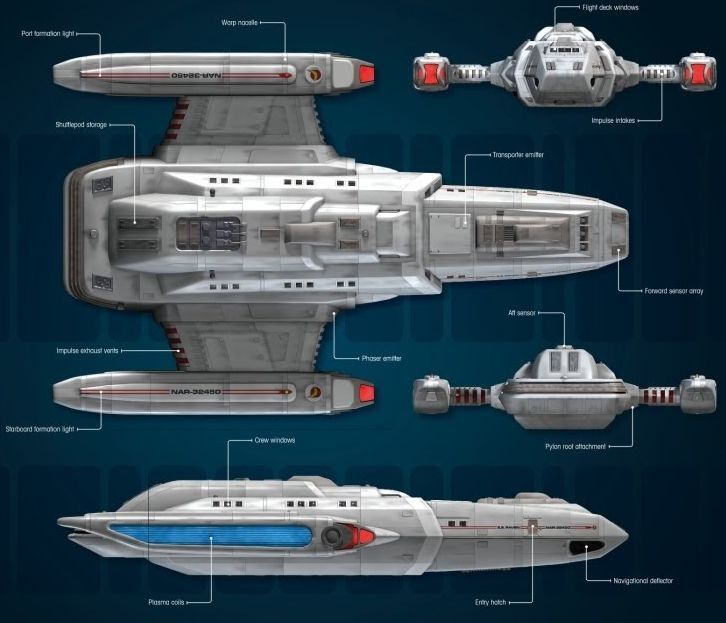 “The Pike isn’t your standard Aerie-class survey ship,” Ethan added  “Enhanced weapons and shields for one.” He leaned in close so no one else could hear, “And, a Narlin cloaking device.”

With the PADD in hand, she smiles, “Thank you, Commander.”

With that Jolie leaves the Commander and his wife at the bar, after she picks up the holo-pad that she always has one her, and nestles it under the PADD that was given to her.