As a deep space surveyor for Task Force 72, the Tesla boasts a rich history of exploration and discovery. This willing little ship is always prepared to brave the unknown and pierce the darkness of the vast reaches of space in an effort to answer the question of what mysteries the universe holds. 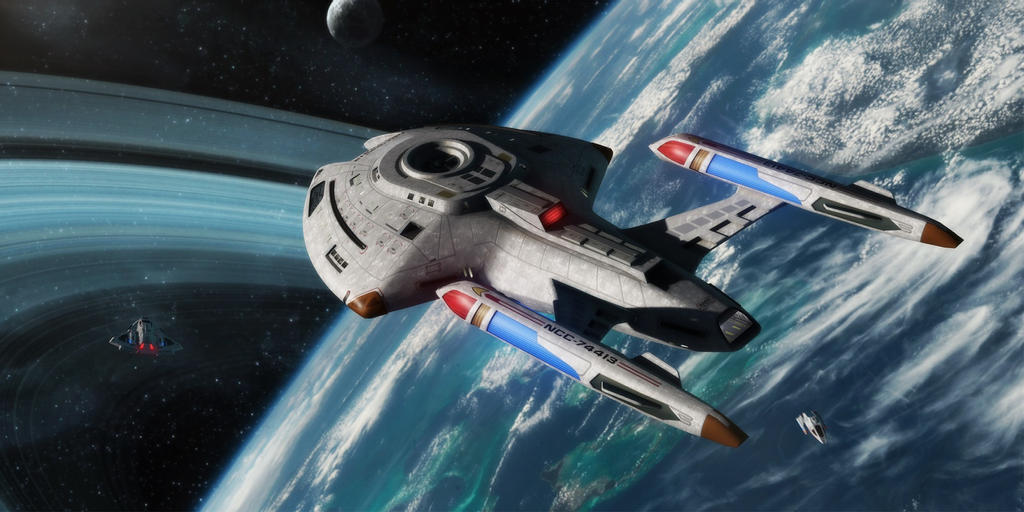 The USS Tesla (NCC-74438) is a Nova-class Federation starship operating in the 25th Century. The Tesla currently serves in the Fourth Fleet’s Task Force 72. She is under the strict leadership of Commander Tia Dalia Savik. The sturdy little starship has seen many an exciting mission during her service to Starfleet and looks forward to many more years of service under the daring captains of the United Federation.

Originally built for small scientific exploration missions, the USS Tesla was retrofitted to survive longer more advanced scientific missions. The Tesla has just come under the command of a new captain, and both Captain and crew are navigating the complex dealings of creating a brand new working relationship. Captain Savik faces several challenges with her new crew, who she views as a band of misfits that she has been saddled with due to being a new captain, but she is determined to whip them into shape… a goal which will not be so easily achieved considering the antics of her somewhat rowdy crew.

Lieutenant Ilyia Vikas had elected to accompany her security team to meet the Bajoran Captain who would be guiding them to the Cardassian ships that were allegedly aligning themselves with the Romulans. As the Tesla hovered in orbit around the planet of Bajor, Ilyia with her selected company took a [...]

Tia strode into the conference room and was pleased to find her XO and the other bridge officers already present, as well as a few new faces she had not yet had the opportunity to meet. She matched the sharp Vulcan features of Ilyia Vikas, her Chief of Security, with the image provided in the [...]

The air smelled sweet as Tia sucked in a deep breath through her nose. She felt tempted to pinch herself to ensure she wasn’t dreaming, but she wouldn’t allow herself such an impulsive gesture as she was certain every eye of her new crew would be upon her as they assessed their new captain. Her [...]