The USS Tesla is a Nova Class starship originally built for small scientific exploration missions, but the Tesla was retrofitted to survive longer more advanced scientific missions. She will be exploring areas of the Delta Quadrant, as part of Task Force 17. Commissioned to Commander Michael Ryder by Captain Zack Marshall-Bennet. The ship was commissioned to Ryder after a surprising revelation to Ryder. 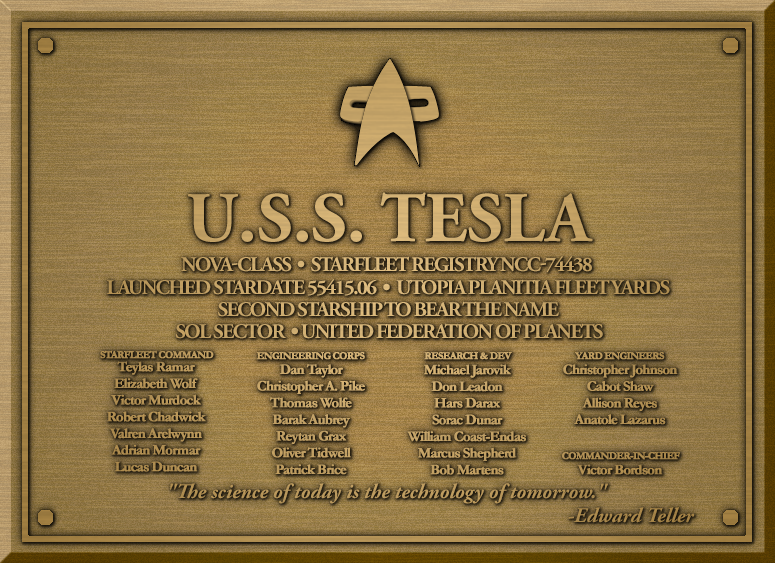 The USS Tesla has a crew of around 100, most of whom are Scientists, though Ryder himself is not a Scientist his skill and history in tactics and battles make the Tesla, able to hold her own in the Delta Quadrant. The Tesla will be there to conduct complex scientific research. The ship’s senior staff will consist of the Captain, Executive Officer, and Second Officer. Each of them is talented in their own field bringing different talents to the Tesla.

Savik continued to fire on the advancing Klingon commander, but her skilled opponent seemed to effortlessly dodge the phaser fire as he charged towards her position behind the broken down bar. He was shorter than most Klingon’s she had encountered, but perhaps that’s what enabled him to possess [...]

Savik fought the urge to chew her knuckle as she so often did when she was wrapped in thought. She was not certain what lay ahead of them, but her ever formulating mind was considering every possible angle and developing a plan. As the doctor boarded the shuttlecraft with his medical bag, Savik [...]

Savik’s brow furrowed as she stepped forward to stand next to the Captain’s chair. Her brown eyes roved around the bridge, attempting to interpret and process all the information the screens were displaying at once. The engineering station showed no major damage to the Tesla, as the shields had [...]

The Beginning of Something New

The shiny decks of the newly commissioned USS Tesla made Michael’s eyes glisten. He had been thinking about his own ship for a long time, but never figured it would be so soon. Captain Beckett had given him a ship due to the incoming and looming threat of the D’Ghor. Michael rubbed the new pip [...]