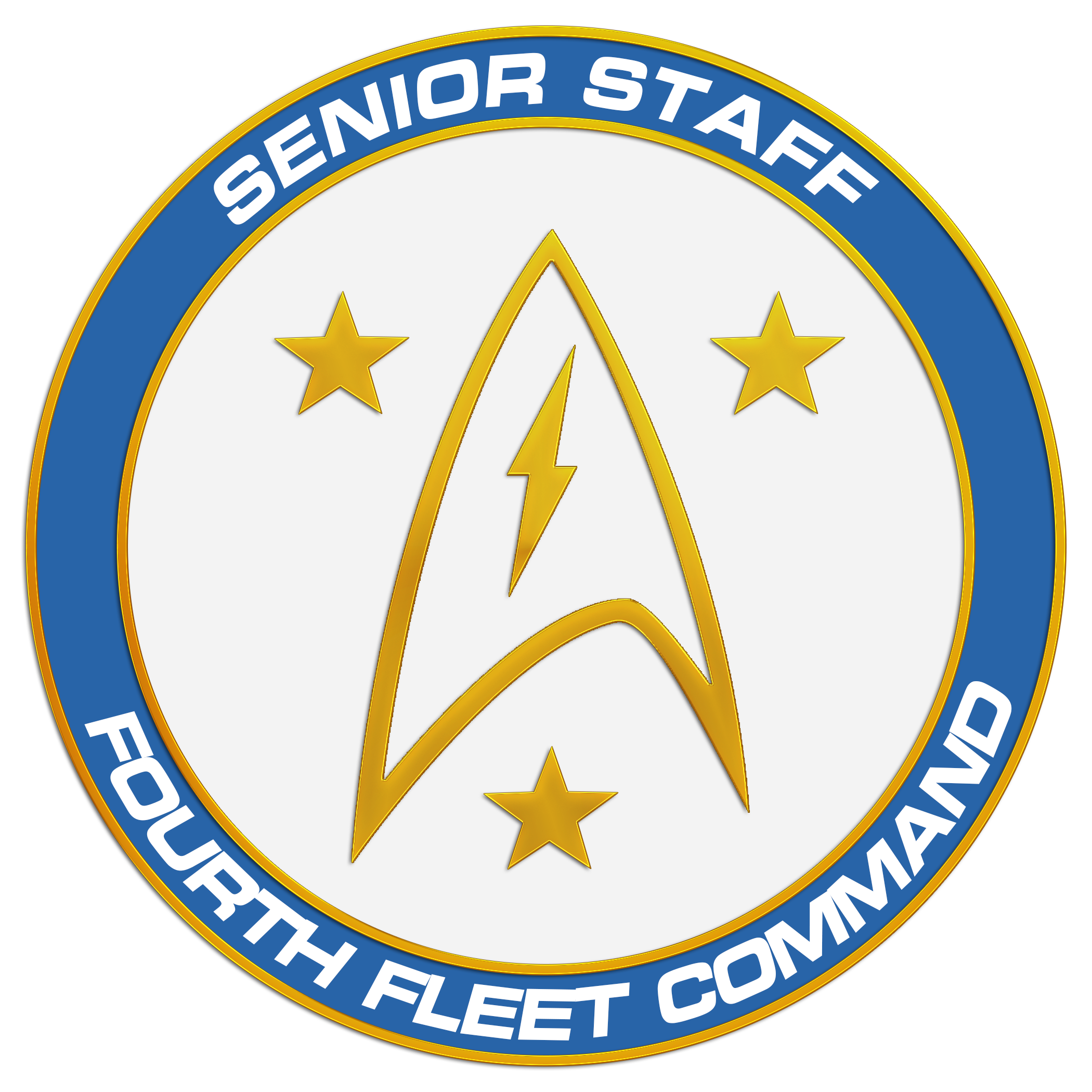 As we’re rolling into September, this has, without a doubt, been a crazy summer for all of us with the COVID-19 pandemic still raging on. Some of us have had more time than we know what to do with, and some have been so extremely busy that we’ve had to take a step back. I want to personally thank all of you for being wonderful members of our organization and for all that you guys do for us, despite what  you may have going on in your real life arenas. We also have the third and final phase of “As Time Goes By” in full swing so check out the competitions and see if they might be something you’d enjoy! With that said, this report will hit on a few major topics, but nothing that I think will be groundbreakingly new. First, I want to start with some good news…

I think most people by now either in reports or on Discord have heard me say that it is the BFAs job to reward the members, but it’s my job to reward the BFA. And today is one of those days where I do just that! A few months ago many of the BFA had earned promotions and awards for their extensive involvement in our extremely successful relaunch and the rebuild that Bravo Fleet went through in the previous year. Since then we’ve had people come onto the BFA and work just as hard. So now, I have two more to hand out:

Mark first came on board the Bravo Fleet staff as the Task Force Executive Officer of Task Force 38 at the end of March. Since then, he has hit the ground running first as a TFXO and now for a TFCO over the past 4 months. In that entire time, Mark has been an integral and invaluable part of the redevelopment of Task Force 38. As TFCO, Mark has continued on the success 38 has had during and through the Bravo Fleet relaunch and 38s own rebuild from near closure at the beginning of the year.

Under Mark’s command, 38 has had continued success with its games, canon, and activity. During The Raptor’s Wings relaunch event, TF38 came in second place for participation and points under Mark’s leadership. But where Mark really shines is his ability to manage his staff’s and his own dedication to developing the canon of TF38. They have completely build up wiki pages and canon for several Delta Quadrant species and entire empires which have been top-notch, high-quality articles that contribute to Bravo Fleet, and Task Force 38s, canon. Thank you Mark for your extreme dedication to Bravo Fleet and as the steward of Task Force 38 through the past 4 months! Task Force 38 has done nothing but continue to grow, and I suspect it will not be stopping any time soon!

Over the past 3 months under the command of Peridot, the Bravo Fleet Gaming Office has finally found its feet and really blossomed. When Peridot came on, they had to essentially build the Gaming Office from the ground up from their predecessor. Since then, our STO fleet has boomed in both membership and assets, Peridot has already begun building an extremely capable staff, and Bravo Fleet is already starting to begin its march towards other gaming platforms for our members to enjoy with one another. There are a lot of intricate details behind the scenes that have really shown the dedication and work that Peridot has put into the Gaming Office that many members won’t see, but the fact that we have consistent gaming awards going out on a weekly basis I think speaks for itself on Peridot’s work thus far. Congratulations, and I know I speak for everyone in Bravo Fleet when we can’t wait to see what comes next!

There are several staff positions open throughout the fleet. There are a few I’d like to highlight!

The first is the recent announcement from LadyBlue that the Office of the Chief of Staff is looking to add a second Command Adjutant position. Command Adjutants are essentially XOs (or in some cases, co-XOs) of the various Bravo Fleet Departments, and are sometimes tasked with specific oversight of an important aspect of that department. In this case, the OCS is looking for someone to oversee fleet competitions. Taken from the announcement:

Overseeing competitions is one of the most important and entertaining parts of the OCS. Competitions help build our community, help members progress and win awards, and above all, are part of the fun of Bravo Fleet. We organise them and we help others organise them. Every competition in the Fleet must be vetted by the OCS to be sure it is clearly and fairly designed, and then set up on the BFMS. The OCS is looking for a staff member dedicated to this role.

This is a really good opportunity to learn a lot of things about Bravo Fleet, how we operate, the ins and outs and why we do the things we do, so I encourage anyone who wants to learn, be a part, and help out to apply!

The next one I’d like to highlight is in the Loremaster department. The Loremaster’s department is responsible for the development and coordination of fleet-wide canon as well as assisting the various task forces with their own. This ranges from creating wiki articles, to improving ones that are already there, and spans from ship specs, to species write ups, to empire write ups, to technology. Right now the Loremaster’s office is looking to add multiple people to its staff to help coordinate. I often hear many people say that writing and canon is their passion in Bravo Fleet, but they aren’t sure how to help out. This is probably the most direct way I can imagine.

Also, if fiction isn’t your thing but you’d still like to help out? There are plenty of things on the wiki that need wiki-type skills to help clean up!

The Loremaster’s office has open, rolling applications to fill up the staff until further notice, and you can apply here.

Speaking of Command Adjutants! The Bravo Fleet Internet Office has been under the control of Reece for over a month now, and he has been doing a great job keeping things organized and really laying down a foundation. Part of that is that he’s been talking about building back up a sustainable Graphics Team for Bravo Fleet for a while now. A true team where work is shared and skill sets and complementary. To lead that, he has asked OneTrekMind to lead up as Graphics Director which is a Command Adjutant position in the Internet Office. If you head over to the Graphics category on Discord, you can see plenty of examples of his work! I can also tell you that from behind the scenes, OneTrekMind has been getting things in order as far as work load and skills which I think will help build a stable department.

Games… sims… SIMMs… whatever you may call them, they’ve been the bread and butter of our corner of the internet for over 20 years. There are absolutely zero plans to change that. The entire relaunch of Bravo Fleet was predicated on the idea that it wouldn’t be our only activity, any longer, and we want to continue pushing writing as one of our main activities.

Many people have already really grasped onto the idea of the solo fiction writing on Relay Station Bravo, which I think has helped boost and diversify our overall writing throughout the fleet! Those under the rank of lieutenant commander have been doing really cool stuff writing from their TFHQ threads, and those who are lieutenant commander and above have been writing some really wild, full blown stories! Amazing stuff!

But I want to talk a little about games. Each task force has been working hard to come up with “pre-mades”. The idea behind this is that through surveys and chatting with our members, we’ve come to realize that there are a lot of aspects to running a game that are more mountains than mole hills for some people to overcome. Setting up and designing a website is a skill set all to itself. Sometimes coming up with a unique idea and schtick is hard. I know I’ve recently personally fallen victim to an age old problem of too many people who joined my game ended up being too busy with BFA and/or staff, and shut down the Venture that I was running. The idea of pre-mades is that some of the ideas of the game, the hosting, and the website, are already done for you if you’re looking to run something.

On the flip side, if you have an idea of your own that you’d like to run but aren’t as keen on the internet side of things, our Internet Office has been doing a phenomenal job getting game websites up, designed, and running within a day or two.

What I want to say is that if you have an idea for a game you’d like to run and think people would join, we have many options to help support you in your endeavours. We will assist you in any way we can. We’ve also been quite loose (almost outright ignoring) OOC rank when it comes to people applying to run games. The truth is that we’re still so early in our new model and people come from all types of backgrounds and experience that we don’t want to hold people back too much. So have a chat with a TFCO and I know they’ll be able to work something out for you!

For our new members, please be sure you are following us on Facebook (facebook.com/OfficialBravoFleet) and Twitter (twitter.com/bravofleet) – in fact following us on social counts towards promotion criteria! Additionally, the more likes and follows we have, the better clout we have in the 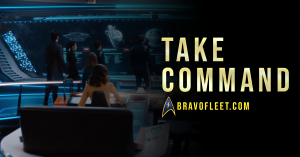 community. On these platforms, we share information about what’s happening in the Fleet, but also Trek news and happenings in general.

Please share our posts or RT us on Twitter to help grow our platforms! Additionally, I’m including a little blurb you may want to share on your personal feeds about the fleet, to help us in growing our community:

For 23 years, Bravo Fleet has brought together individuals from all around the world to join together and celebrate all that is Star Trek. At its core, it was a group founded to continue the stories that we saw on screen – to tell the stories that we had imagined. Collaboratively, Bravo Fleet has written thousands, if not millions of pages that have added to and enriched 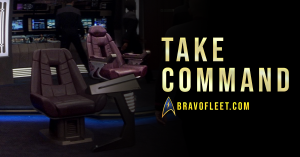 the greater Star Trek universe, spawned numerous other groups, and became a home for those who wanted to continue writing the future. It is upon that legacy that Bravo Fleet seeks to expand its offerings and once again redefine what it means to be a Star Trek fan club.

Through online gaming, competitions, discussions, and of course writing fan-fiction based in 2399 – the new Star Trek: Picard era, Bravo Fleet strives to build community and collaboration rather that have people siloed. Through the use of its new user-oriented website, discord servers, and traditional online forums, we encourage everyone who is a trekkie or trekker to join us in celebrating Star Trek as we anticipate what is to come and cherish what has come before.

Join the fleet today and take command of your own unique future. 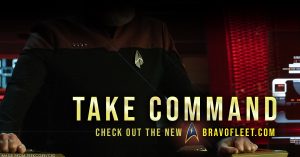 Through online gaming, competitions, discussions, and writing fan-fiction, @bravofleet strives to build a positive community that celebrates all that is #StarTrek.

Check out the fleet today and take command of your own unique future: bravofleet.com

So please share these if you can, and also if you need full-size images of the ones above please do not hesitate to reach out to myself or the Comms Office for the full-res versions!