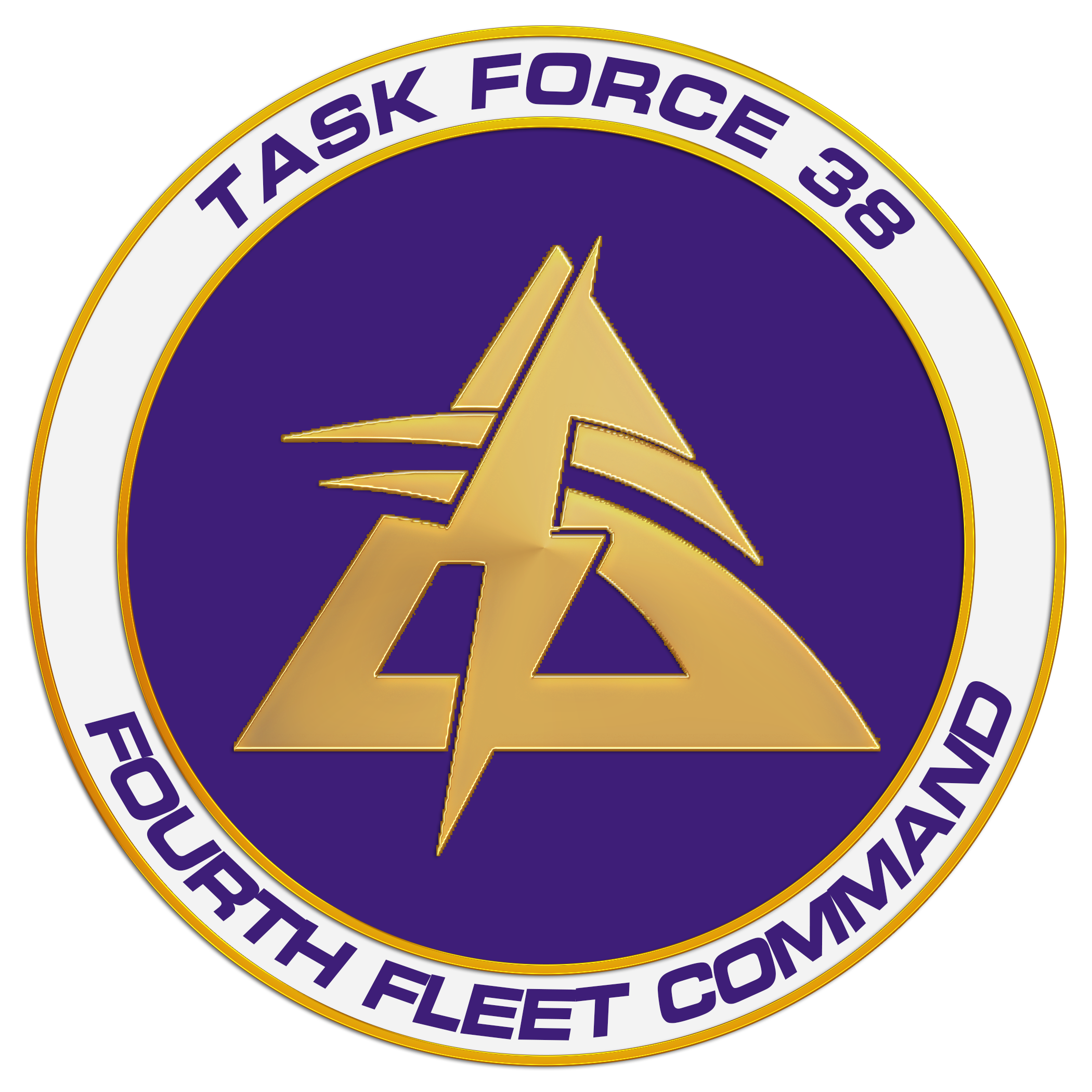 “Reflections in a Double Scotch”

The sounds of a solo classical piano filled Delta-Bravo’s dimly-lit conference room from concealed speakers. Rear Admiral Matthew Cody sat alone in the darkened room, facing the expansive forward window which afforded a breathtakingly panoramic view of Mithrar space. Mithrar III sat low and to starboard of Cody’s view, with the prow of Mithrar Anchorage extending ahead and from beneath the station’s forward sail which contained the accommodations recently afforded to the Starfleet contingent by the Turei Alliance.

The door behind him opened with a hiss and Cody turned his head slightly at the sound of footsteps to see Chief Yeoman Floyd crossing the room towards him, carrying a tray. Coming to a stop at the small table beside the admiral, Floyd tilted his head with a frown of concentration as he tried to place the music. He positioned a crystal glass, a whisky decanter and a small ice bucket on the table.

“Bach, Sir?” the yeoman asked softly as he poured a large measure of the amber liquid into the glass.

“Chopin,” replied Cody. “Nocturnes, opus number 9.” He looked up at Floyd with a smile. “It was a decent guess though.”

“Thank you, sir,” Floyd stepped backwards. “I’m sure I’ll get there eventually. Will there be anything else, Admiral?”

“No. Thank you.” Cody turned his attention back to the forward viewport and watched as a Malon freighter slowly and silently approached the forward docking boom. Floyd nodded in acknowledgement and wordlessly left the admiral to his whisky and his thoughts.

Cody sipped his scotch and reflected that it had been an interesting – if unpredictable – few days since their arrival at Mithrar Anchorage. The fighters which had been attacking the station on their arrival had turned out to be mercenary vessels – Hazari, if the captured pilot currently recovering in the infirmary was anything to go by. They had yet to learn who had hired the Hazari, but Cody had dispatched Elysion to visit a number of known locations of ill-repute across the sector to see if anyone was willing to share what they knew in exchange for a few strips of latinum… A case of ‘rounding up the usual suspects’, so to speak.

The station itself had provided the Task Force engineers with a different set of challenges… Damage caused by the Hazari mercenaries aside, Mithrar Anchorage appeared to have been built and then pretty much left to its own devices for the best part of twenty years. Whilst nothing aboard the station was significantly old or broken per se, almost no maintenance or upgrade work had been undertaken by the Turei Alliance during that time. Coupled with the fact that it turned out that Federation and Turei computer systems were incredibly reluctant to communicate with each other, the engineers had gained an extra challenge to resolve on top of everything else. So far, the station’s superstructure and environmental systems had been fully repaired and the shield generators upgraded, but the installation of the other defensive systems was still yet to begin. If the Hazari – or anyone else for that matter – decided to come back for another attack, the defence of the station remained dependant on the availability of the starships that Task Force 38 had brought with them through the Barzan Wormhole.

Then there were the Turei themselves…

A curious species, Cody mused as he savoured his whisky. The Turei had requested Starfleet’s support in the Delta Quadrant due to an increase in ‘pirate activity’ in the sector. What they had failed to share in advance was that Mithrar Anchorage itself had already been recently attacked… For some as yet unfathomable reason, the Turei government had chosen not to make Starfleet aware of that fact until after Task Force 38’s arrival at the station. As a race, the Turei seemed conflicted in Cody’s opinion, a species with an inherent desire to be open and accommodating, yet controlled by a bureaucratically-complex and restrictive government. The station’s manager – Majister-Eminent Administrator Zahav – appeared to be a personification of that conflict. Cody sensed that she wanted to be as open and accommodating as possible to her Federation guests – but for some reason, the edicts and bureaucracy of her masters prevented her from doing so. Because of that, it had been a difficult few days for the burgeoning relationship between the two governments.

So far at least, there had been no major problems with his own operation. All of the ships were functioning well and conducting their various assigned missions in the Delta Quadrant, and apart from a few personality clashes here and there, his team here aboard Delta-Bravo were working well together. All they needed was a couple of weeks of relative calm to get everything up and running properly, and for everyone to settle in to their new home.

A distant flash through the wide viewport which signified a ship dropping out of warp caused Cody to get to his feet and walk across the darkened room to the floor-to-ceiling window, his whisky glass held low by his side. It looked as if his hopes for a few weeks of peace had already been dashed.

The Hirogen heavy cruiser which had just appeared altered course to put it on a direct heading to Mithrar Anchorage.

In the distance, beyond the approaching Hirogen vessel there was a second flash. Followed by a third and a fourth.

“Ops to Admiral Cody,” the Texan drawl of Commander Truman was almost a surprise as it cut through the stillness of the silent conference room. Cody tapped his communicator to respond.

“I’ve just seen them,” he said, saving Truman the job of explaining the reason for his call.

“Very good sir. All four Hirogen ships have contacted the Turei ops room and requested permission to dock and for their crews to disembark. For shore leave and resupply purposes apparently… The Turei have agreed to the request.” Truman’s tone showed clearly what he thought of that decision.

Cody screwed his face up in response. “Alright,” he said. “Move security up to alert level three and make all department heads aware that we’re going to have company… Cody out.”

Those peaceful few weeks would just have to wait a while longer.

As Starfleet and the other representatives of the Federation begin to settle into their new roles as part of Delta-Bravo aboard the Turei station Mithrar Anchorage, our existing games have been joined by a number of new arrivals.

Commanded by Sean, our very own BF Magistrate, The USS Medusa is a Manticore-class heavy escort, assigned with returning to the Nacene Reach – the first area of the Delta Quadrant explored by the famed USS Voyager so long ago. Her primary mission is to re-establish contact with the species of the Reach and work with them to establish trade and diplomatic ties.

The Medusa may seem like an odd ship to send out for diplomatic purposes, but Starfleet was intentional in its assignment. The species native to the Nacene Reach are known to be passionate, duplicitous, and at times outright aggressive. A ship capable of holding its own, while not being so large as to be outright terrifying, is needed to ensure mission success.

If you’re interested in joining Medusa as she departs for the Nacene Reach, then please reach out to Sean on Discord.

As the first of Task Force 38’s pre-made games, USS Ares is an Intrepid-class explorer, assigned to reconnoitre the Kazon Collective. Their objective is to determine who are the allies and the enemies of the various sects, assess their power and technology levels, understand which races they have relationships with and conclude what sort of threats or diplomatic opportunities they could pose to the Federation. This mission profile is intended to create a lot of opportunities for overlap with other local species and numerous diplomatic and dramatic storylines in the Delta Quadrant.

Our second newly-created pre-made game is the Luna-class USS Europa.

One of the first Starfleet vessels assigned to explore the Swallow Nebula, Europa is a scientific and exploration vessel.  Assigned to make formalised contact with the Alsuran Empire, the Krenim Imperium, and the B’Omar Sovereignty, they are also tasked with determining whatever they can regarding the current status of the Borg Collective, without directly engaging them…

Both Ares and Europa are intended as commands for new captains – games with a Nova website, mission profile and ship registry all set up, plus any additional support required from the TFSS… all these ships are lacking is somebody ready, willing and able to take that centre seat on the bridge and give the order to engage!

If you’re interested in taking on the challenge of commanding either Ares or Europa and you’ve already met (or nearly met!) the requirements for the rank of Lieutenant in BFMS, then please drop me a message to discuss via Discord or on email at tf38@bravofleet.com.

Finally, for those BF members who like the idea of writing in the Delta-Quadrant but perhaps don’t have the time or desire to commit to a regular game, Christopher our TFXO has created ‘Delta-Bravo: Underbelly’ – TF38’s seedily-named fiction sandbox, set aboard Delta-Bravo and the surrounding sectors of space.

Delta-Bravo: Underbelly focuses on the lower ranks (in the spirit of TNG’s ‘Lower Decks’) of those assigned to Starfleet’s headquarters in the Delta Quadrant, as well as its seedier lower levels, where shady deals and activities take place in every bar, gambling den, warehouse, flophouse, henhouse, outhouse and dog house. Contributors could perhaps write as Starfleet security personnel investigating these locations, take command of a shuttle or runabout and conduct survey missions or aid local species, or take on the role of an engineer participating in the maintenance, running and upgrading of Delta-Bravo – basically, what happens here is up to you! We feel that the scope for great stories here is huge and look forward to finding out what else is happening aboard the station!