Be the change that you wish to see in the world.
–Mahatma Gandhi

USS Saratoga (NCC-83050) is an Odyssey-class starship of the United Federation of Planets under the command of Fleet Captain Azras Dex as part of Fourth Fleet’s Task Force 47. One of the first wave of Odyssey-class ships commissioned, Saratoga is a vanguard for Starfleet and a respectable and sought-after assignment for any officer desiring to explore the unknown and champion Federation and Starfleet ideals. 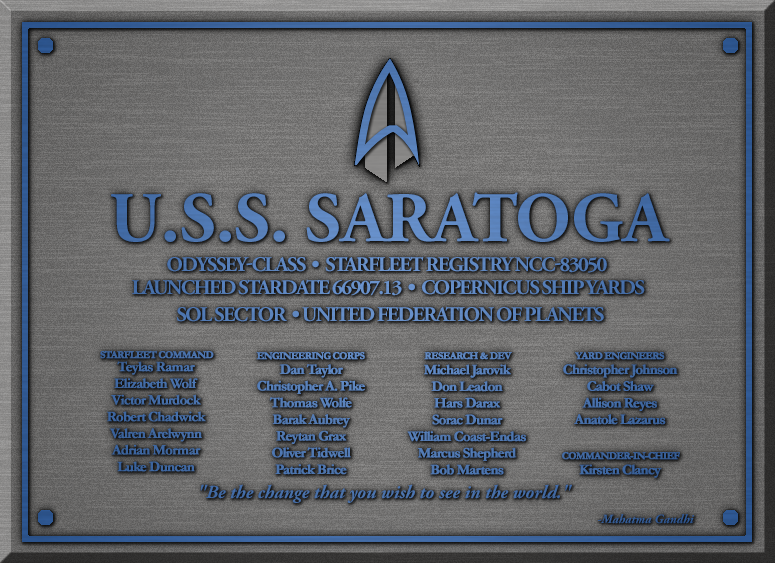 The morning had come quicker than anyone would have liked, Ritru tossed in her sleep as her alarm went off. After shutting off the alarm, she turned over to put her arm around T’Prel only to realize that she wasn’t there. Opening her eyes barely enough to see that T’Prel was indeed not in [...]

Negotiations between the Romulan Republic and the people of Rhijun have been very productive and going in what seemed like the right direction. The last day of the diplomatic conference was held on the planet below so anyone in the colony could attend and voice their concerns about possibly joining [...]

“Direct hit off our port bow,” Dazra said as the Saratoga rocked hard with that last hit from the Audex. “Sheilds are holding at seventy-five percent,” Dazra added as the ship came about continuously firing on the Audex. “Sir, the Aldore has been disabled and the Audex has seemed to have [...]

It had been only a couple of days since the Orions made their appearance, and things seemed to be settling down. The engineering crew along with some Remans were making progress on repairing the refineries. The buildings were in the mists of being repaired or completely rebuilt giving the residents [...]