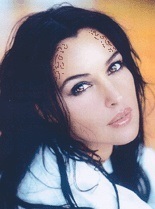 Dazra Loian is an unjoined trill who was born on Trill, she didn't want to be joined as it didn't interest her. She had other plans that being joined she felt would limit her in some way, shape or form. She joined Starfleet to become a Security Officer, she served aboard a few starships before being sent to Starbase 38, which would later be renamed Guardian Station.

Dazra Loian was born on Trill on June 15, 2367 to parents Dazrie Loian and Tiran Loian, she was a bright young child, she had an older sister who went on to be joined and a older brother who also decided to go to be joined, but was rejected by the commission. He later would join Starfleet and become Captain of his own starship. Being the youngest by 15 years to her brother and 17 years to her sister, she really didn’t have a close relationship with them as they had there own lives to live.

Dazra excelled in school, she was outspoken and gifted. She tended to spend time studying then playing with her friends during the week. She studied hard so when she was old enough she could pass the Academy Exam and get accepted. She decided to enter security as she had always studied martial arts and other types of hand to hand combat. One day of of her classmates where picking on one of her friends, throwing rocks at her and wouldn’t leave her alone. Fed up she decided to stop it and when the student turned on her she quickly had him on the ground and did so without leaving marks on him. To this day student hadn’t been picked on by anyone, or anyone for that matter.

Once she graduated, she entered the academy and excelled. She had take a lot of extra courses from intelligence, to piloting, and more so she would be well versed in other departments as well if the need where to ever arise. Once she graduated in 2389 she was assigned to the USS Apache during the Romulan Supernova event. She spent the next few years aboard until she had a disagreement with her Department head that never got better and veered towards harassment.

In 2393, she placed a transfer request to Deep Space 6 and was accepted, she would receive a promotion to Lieutenant Junior Grade and had a perfect work record. It wasn’t until 2398 that there was another incident that was no fault of her own, and without being told or even asked she was being sent to Guardian Station where she would serve as Security Officer at the rank of Lieutenant. Hopefully things her would be better for her then her last two postings.