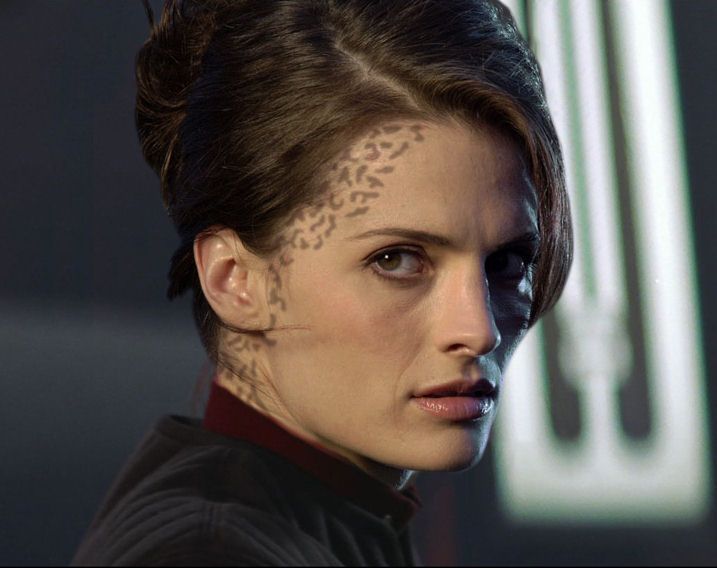 Azras Dex was born Azras Vialen who became joined the Dex symbiot in 2368 after graduating from Starfleet Academy. She would become the 4th to have the Dex symbiot. She started her career in Security, starting from Security Investigator and making her way up to Chief Security/Tactical Officer. She took her Command course and was offered Executive Officer aboard Deep Space 7 and eventually got her first Command. In 2399 she was approached about becoming Task Force 9's Executive Officer and being assigned to Guardian Station. After a short time, Starfleet recalled her to Starbase Bravo to become the Dean of Cadets for the Fourth Fleet (aka Bravo Fleet) Academy. After a brief time with the Academy, she was called to become Task Force 93's Commanding Officer and assigned to Devron Fleet Yards

Azras Vialen was born to Jasral and Rajess Vialen on July 10, 2346, on the homeworld of Trill. Azras was an only child growing up as her parents were unable to have any more children due to an accident. She was a bright child, studying came easy for Azras. She was outgoing, her friends loved her and would sometimes have study groups so Azras could help her struggling friends through classes. In her early teen years, she wanted to become joined. She talked with her parents about it and they supported her decision, she would become the first of the family to be joined.

She applied to the Trill Symbiosis Commission and started studying hard so she could become a host, she also wanted to join Starfleet which would give her another leg up with the Commission. Her parents again supported her, she eventually graduated high school with honors and applied for Starfleet Academy. Through an error in the system, her application was initially denied, but after talks, they learned that it was a computer error and had fixed it and she was finally accepted to the Academy.

She had said her goodbyes to her parents, she would see them after the Academy when it would be time to be joined if she got approved by the commission. She traveled to Earth to begin her four-year schooling at the Academy. She would start by doing her General Education classes while she figured out what she wanted to major in. Later on, in her first year, she decided she wanted to do Security and Tactical so she enrolled in that program.

Starfleet Academy was a lot harder than she thought and compared to the schooling she had while she was younger. But, she didn’t give up and spent most of her time studying throughout her four years as well as what was needed for the Commission. She had a lot of sleepless nights but in the end, it paid off and she graduated from the Academy with honors and top of her class.

The next day she would arrive at the commission and have the procedure done, she said goodbye to the previous host Kiram Dex. After a short time, the procedure was complete and she became Azras Dex. She would become the 4th host of Dex and had all the memories of the 3 other hosts. After about a few weeks, after they were sure the Symbiont would hold they released her to be able to head back to Starfleet for her first assignment. She would say goodbye again to her parents and head off back to Starfleet for assignment.

Her first assignment would be as Security Investigator aboard the USS Adelaide an Intrepid-class assigned to the Beta Quadrant area, patrolling along the Klingon/Romulan boarders. She worked hard and in 2370 she was promoted to the rank of Lieutenant Junior Grade, she would then put her skills to work when a Romulan spy disguised as a Starfleet Officer boarded to try to steal Starfleet technology, Azras was suspicious of something and with the permission of her superior officer started an investigation. She later learned of who the person was and was able to stop him before he was able to escape with the information that he had been stolen.

She would become a valuable member of the crew until July of 2374 when the USS Adelaide was ambushed by raiders that somehow had Starfleet technology, they tried to disable the ship to take it into custody and to try to retrieve the stolen objects was destroyed as it knew where to hit that was most vulnerable.

It wasn’t without them getting off some good hits of their own, and a distress signal was sent out to a nearby Starship who was able to defeat the raiders and rescue the survivors of the ship as the escape pods were launched before the Adelaide was destroyed. Azras was able to link the incident to the Romulan spy who had managed to get a few good pieces of equipment and information out before he was caught. They were able to retrieve the equipment, though it was severely damaged from the attack.

She was then assigned to the USS Challenger a Galaxy-class Starship that was assigned to the Alpha Quadrant and operated near the Breen, Cardassian, and Ferengi space. She was assigned as a Security Investigator until 2376 when she would be promoted to the rank of Lieutenant and given the position of Security/Tactical Officer. In 2377, during a routine patrol near Cardassian Space, there was a distress call from a freighter that had been attacked by a Cardassian ship right between Cardassian Space and the Badlands and they were requesting assistance.

With caution, the USS Challenger set course to investigate more but when they arrived it was a trap and unknown ships started to attack the Challenger. After some tense moments, the unknown ships were disabled and the crew was transported over into the brig. Azras was the first to begin the interrogation of the prisoners only to learn they were rogue Cardassians in what appeared to be Marquis ships to try to get Starfleet to think it was them and not Cardassians. With Azras quick thinking and good interrogation skills, they were able to uncover more rogue Cardassians cells and handed them over to their government.

While on the Challenger, she had met Arzin Varen a Civilian Scientist, the two would start dating in 2376 and got married in 2379.

She would then be transferred to the USS Devastator a Sovereign-class assigned to the Gamma Quadrant, which provided to be more interesting than her previous assignments. Her husband was also transferred to the Devastator to be able to study the Gamma Quadrant. During this time Azras became pregnant with their only child Linha Varen who was born on Sept 20, 2381. During this time Nothing major happened other than a few meetings with the Founders which provided very enlightening.

In 2382, she would be promoted to the rank of Lieutenant Commander and given the position of Assistant Chief Security/Tactical Officer aboard the Elysion-class USS Excalibur. Their first station was near the Romulan/Klingon boarders doing standard patrols, a Klingon ship crossed over into Federation space requesting assistance. Confused as to what was going on, they let the Klingons board for a meeting, The Chief Security/Tactical Officer was in the meeting when it seemed to have been a trap, Commander Harrison was killed by the Klingon, the Captain of the ship was severely injured but with Azras quick thinking she was able to stop them from going any further and take them into custody. She had her second child a son Yadri Varen on November 2, 2383

They were able to interrogate them and send them back to their government for discipline. Azras was given the position of Chief Security/Tactical Officer after the death of Commander Harrison. She would spend the next couple of years onboard the Excalibur without any further incursions happening. During this time she would take the Command Course and pass with flying colors.

She was then offered the position of Executive Officer after showing bravery while thinking fast on her feet which saved the lives of her previous Captain and the crew. She accepted and was promoted to the rank of Commander, she would spend the next couple years serving as Executive Officer aboard the Immense-class Space Station. Though it was shorter than most of her other assignments, she found this assignment more of a challenge. In 2387, Romulus and Remus were destroyed as a star went supernova which caused a lot of heartaches.

In 2390, she was promoted to the rank of Captain and given command of the USS Nova a Nova-class surveyor. She would spend this time exploring near the Talarian and Tholian space. Things were pretty quiet with only a few skirmishes, but within the few years, she was Commanding Officer she had proved herself. Sometimes, it was beyond the scope of her duties but in the end, she did what she thought was best in light of situations.

She would become the newly reestablished Task Force 9’s Executive Officer. She would be assigned to Guardian Station a Guardian-class Space Station, where she would serve her duties as the Task Force’s Executive Officer. After the incident with the Breen, they felt that Azras would be perfect for the job due to her experience in tough situations. Her daughter Linha Varen entered Starfleet Academy to become a Doctor. Her son would come to Guardian Station with them until he reaches the age to enter Starfleet as an Engineer.

Azras would later be transferred to Starbase Bravo where she would become the Dean of Cadets for the Fourth Fleet (aka Bravo Fleet) Academy, overseeing the training of new cadets. This was a sudden change but Starfleet felt she would be good in this position.

Note: The image used belongs to Slagar and used with permission