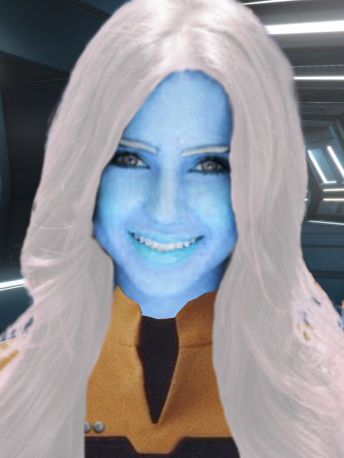 Jheria looks like any normal Andorian except she was born without the antenna's on her head, was a birth defect. This does not affect her ability at all. She grew up with human parents after her parents abandoned her after she was born different. She is a hard worker and tends to work a bit to much at times. Jheria is blunt, doesn't beat around the bush and is outgoing and an easy person to get along with. When she isn't working she loves to read, painting, as well as listen to music.

Jheria Dilucca was born Jheria Zh’ikevek on Andoria on May 21, 2364, due to being born with no antenna’s she was abandoned and cast off Andoria due to her birth defect. She was transferred to Earth where James and Sarah Dilucca adopted her into their family and gave her their last name. She has a brother Tim and a sister Kim who doesn’t treat her any differently than they are. At an early age, Jheria was a very bright young girl who loved to fix things. She would take things apart just to put them back together again.

She excelled in school, though other children would tease her because she looked different than other Andorians. She chooses to just focus on her schooling, though she had friends that she would hang out, and study with. She was a very outgoing and outspoken person, her parents supported her in all that she did in life. At a young age, she also had the talent for painting, some of her paintings went for sale or even art shows. She spent most of her free time just working on different projects, or figuring out how something worked. She graduated at the top of her class and made the decision to join Starfleet Academy which her parents were proud of her for and fully supported her choice.

She applied and was accepted, she excelled at the Academy and graduated with honors, after graduation she was placed on the USS Melbourne as Engineering Officer where she would spend the next several years. She would see the supernova that destroyed Romulus and Remus as well as other things during her time. She was then transferred to USS Cairo as Assistant Chief Engineering Officer when the USS Melbourne was decommissioned.

She would spend four years on the USS Cairo, they were stationed in the Beta Quadrant patrolling the area. 2399, she was being reassigned to Starbase 38 a Guardian-class station above Brazan II guarding the wormhole to the Delta Quadrant. In a short time, she was aboard Starbase 38 which changed to Guardian Station after the Breen attack. She was promoted to Commanding Officer of the Starfleet Corps of Engineers or SCE. She would later be offered the position of Chief Engineering Officer which she accepted.