“We shall not cease from exploration
And the end of all our exploring
Will be to arrive where we started
And know the place for the first time.”

The USS Odyssey (NCC-80000), is an Odyssey-class Federation starship and was the prototype for the class. The Odyssey is a deep space explorer and is known for many of its exploits in the Alpha and Beta Quadrants. Commanded by Captain James Preston McCallister, the ship is one of Starfleet’s most advanced vessels operating in the fleet in 2399. The crew is one of the most diverse too, something that McCallister carried on from his previous command (Luna-Class USS Triton). The bulk of the crew is made up of those who served on the USS Triton and the previous ship named USS Odyssey. The ship was launched in 2387 with McCallister as its captain. The ship’s motto is based on the poem by T. S. Eliot named Little Gidding. 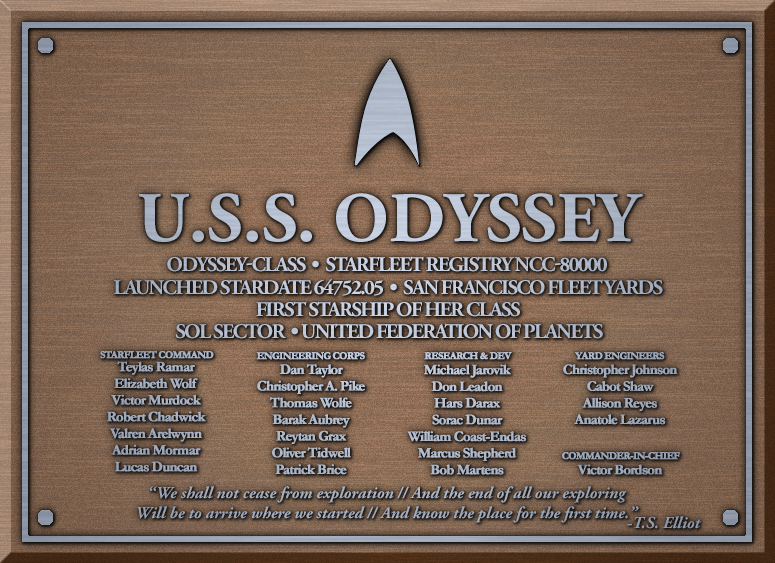 Doctor Slyvexs took a moment to catch her breath as she felt another wave of nausea and headache hit her.  “Doctor,” spoke Doctor Agnes behind her, “why don’t you rest?” The Denobulan woman shook her head, “No, we’ve got to see this through.” “We will, doctor, I promise, [...]

“I don’t understand; how are you all here?” Horin questioned after letting go of Hunsen.  “We were trying to figure that out ourselves a moment ago,” Hunsen said as he looked upon the others that were with him.  T’Rani stepped forward, “It is agreeable to see you, [...]

Yanking the transparent gas mask off his face, Lieutenant Commander Tomaz walked into engineering and swiftly approached Commander Duncan.  “Report?” Duncan asked his strategic operations officer.  “The Telemachus is secure and ready to launch remotely if we need it. The neurozine [...]

Thirteen minutes had passed, and their attempts to retake the ship were being hampered in every direction they could find. Nervously, Acting Captain Duncan paced around the pool table in engineering as he allowed those that were left to do their jobs. The ship was now at high warp after Hunsen and [...]