Max was born in 2366 to Captain Nathan Harrison and Lieutenant Commander Lianne Harrison on board the Federation starship, USS Roehampton. Born to a ship’s captain and its chief medical officer, meant that Max did not see a lot of his parents by the time he started his fulltime education. For most of his childhood he was looked after either by his teachers or by friends’ parents when his parents were on duty. He became extremely close to his father’s first officer Commander Luke Duncan and chief science officer, Lieutenant Commander Nicola Sand. As a result of this, the young couple eventually became his godparents. Luke and Max would spend a lot of time together on the holodeck or playing a range of sports.

Max would have to deal with tragedy at an early age when his mother was killed in a shuttlecraft accident during an away team. His mother’s death caused his father to become depressed and unfit for duty. As a result of this, his father asked if his first officer would take care of Max once he had dealt with his own issues. Max moved in with Luke, while his father was off the ship for two months and would be looked after by the young commander in between shifts. Nicola would also help out where she could too.

When his father did return to command, the relationship between son and father was highly strained as Max had grown a close bond with Luke (unintentionally of course). Both he and his father would spend many weeks and months in therapy with the ship’s El-Alurian counsellor, Lieutenant Commander Tashanti.

After Luke left the Roehampton to take command of the Odyssey, Max was pretty upset. Tragedy would hit the poor boy again when the ship was on patrol in the Beta Quadrant and attacked by mercenaries. Fortunately the Odyssey arrived in time to fight off the attackers and save the ship from destruction. Sadly though Captain Harrison was killed by a boarding party. Immediately, Captain Luke Duncan took the young boy with him under his wing.

Over the next decade, Max became part of Captain Duncan’s family. He was the page boy at his wedding to Nicola and both of them eventually adopted him. The family were displaced into a temporal subspace node for a short amount of time, however they lived out almost four years within the node. Once they were rescued, Luke and Nicole moved to Deep Space 19. There Max found his new life and was able to start to deal with the trauma from his childhood. He worked hard at school, made some good friends and would regularly play basketball. Luke would always make time to see his games, even though he was now an admiral and running a fleet.

By the time Max was seventeen, he had already applied to Starfleet Academy. He would honour his birth parents and adoptive parents into the service. Many thought that he would either follow Luke’s footsteps in becoming a pilot or Nicola’s path with science. Both areas he excelled well in and had interests in them too. Instead he surprised them all and said he wanted to become a counsellor. Four years at the Academy, not only training as a Starfleet officer but as a counsellor too, was an intense experience for Max. However he loved every moment of it and soon graduated in 2379, gaining his first posting on the USS Vendetta as a counsellor. 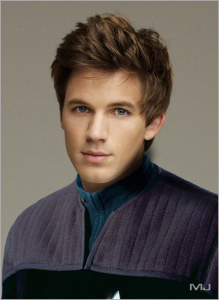 Being on the Vendetta, a Nebula-class ship, gave Max a wide range of people to interact with and engage with. He worked hard and formed strong bonds with many on the crew. The ship’s counsellor and chief diplomatic officer became a mentor to him. Two years later he was made assistant ship’s counsellor with the promotion to lieutenant junior grade. Offered the opportunity to take further training by the ship’s captain, Max agreed to attend the advanced diplomatic training. An intense course that he could undertake while still serving on the ship. He stepped up to the challenge and passed the course.

Wanting to flex his wings a bit, Max moved on from the Vendetta and joined the crew of Deep Space 10 for two years as station’s counsellor and assisted the captain with diplomatic matters when required. A whole station’s mental health was a test too for the young officer. After a while, he found remaining in one place not as exhilarating as he was led to believe and requested a transfer to a ship-based assignment. Even though DS-10 was close to the Cardassian border, due to Starfleet’s decline in assisting their former enemy, the station did not see much ‘action’ and daily life became quite reliable, dull and lacked any energy.

In 2384, he was offered the position of chief counsellor and chief diplomatic officer on board the USS Charlton, a Galaxy-class ship. With it came a promotion to full lieutenant and Max loved every moment on board the ship. The ship’s first officer also saw Max’s command potential and started to train him further in starship operations (being the ship’s former chief engineer). Over the course of two years, in between missions and every other duty, Max become quite the well-rounded officer and was eventually put in as part of the chain of command. He undertook the beginner’s bridge exam, which he passed with flying colours and then took the intermediate one. Again he aced it. Being placed in charge of a duty shift, running a decent size department and being involved in most away missions that required his diplomatic expertise made Max quite the officer. All the time while he served, he did his best to avoid anyone using his adopted surname to his advantage. He did not want special treatment as he was the son of a renowned fleet admiral. While on the Charlton, he made some close friends, but found his work kept him from forming long last relationships with anyone. The counsellor had yet to find any romantic interest. 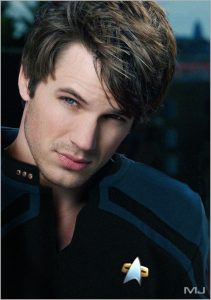 Consequently, he was headhunted to join the brand-new USS Odyssey as its chief counsellor and diplomatic officer. Captain McCallister, the ship’s commanding officer, had been a friend of the Charlton’s skipper, and had been impressed by what he heard about Max. Alongside that, McCallister owed Max’s adopted father everything for putting him in command of his own ship years ago. As some way of paying that gratitude back, McCallister wanted Max to join his senior staff and to make Admiral Duncan proud. Having a ‘Duncan’ on the Odyssey seemed like the right thing. Max was at first reluctant as he had worked hard to avoid using his father’s coat tails to advance his career. That said, McCallister went out of his way to persuade the counsellor to join him. As such a loose sense of friendship started between the two men.

Joining the crew of the brand-new prototype for the Odyssey­­­-class was a complete change for Max. It was much larger and the work he would deal with would keep him on his toes. He eventually accepted the offer from McCallister, especially when McCallister shared his own story of how Max’s adoptive father had changed his life years ago by giving him a promotion to captain after a battle that took away his own captain and first officer. Max, on some level, could relate with his own birth parents being killed during the line of service. Alongside this, the new ship was a lot larger than the Charlton and it was assumed the ship would out on the frontlines of Starfleet’s efforts in flying the Federation flag. 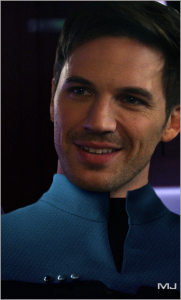 Life on the new Odyssey was great. He would find himself quite involved in liaising with civilians that lived on the ship as well as the Starfleet crew. When the ship’s first officer left to assume command of their own ship, Max was promoted to third officer along with the rank of lieutenant commander. Over the course of the next eight years, Max’s work was more focused on his work as the ship’s diplomatic officer then as head counsellor. He advised Captain McCallister many times and his counsel was highly sort after by others too. By the time he had reached thirty-seven, he completed the advanced bridge exam and was made a commander. At the start of 2399 though, he received a call from his adoptive mother, Nicola, asking him to come home as Admiral Duncan had died. The admiral’s death was of natural causes and he had the opportunity to retire enjoy his last few years on the colony of Kovar Prime. Thankfully the Odyssey was already on its way to Deep Space 19, that was in orbit of Kovar. Max took the death of the man who had become his father for most of his childhood and requested a few weeks of personal leave to grieve. Returning home to Kovar, Max assisted his mother with the funeral arrangements and remained with her for some time after. Not wanting him to be stuck on Kovar, she insisted that he returned to the Odyssey, where thankfully his crewmates were all there, ready to assist him deal with his loss. It was at this point that Duncan realised he had to do something more with his life besides his career. He needed to push himself beyond his safe limits, try new things and build relationships with others. He also realised he really needed to consider settling down to have a family. The death of his adoptive father made him regret not doing this sooner.

Maxwell Jack Duncan (neé Harrison), commonly referred to as Max, is the third officer, chief counsellor and chief diplomatic officer on board the Federation starship USS Odyssey. The adopted son of famed fleet commander Fleet Admiral Luke Duncan, Max has become quite the officer and has built a reputable career for himself. After suffering traumatic events during his childhood, he has resorted to paying back the support he received by doing he same back for others in need. He is a skilled communicator, diplomat, negotiator and advisor. Duncan relies on his boyish charms, wit and intelligence to help him deal with most situations. As a result of his approaches in his work, his positive contributions and his past, he is well respected among his peers.