Tobias Finlay Court is a Starfleet enlisted officer and the current Yeoman to Captain McCallister on board the Federation starship USS Odyssey. He also serves in the dual role of Chief of the Boat. Tobias, or Tobi to his friends and colleagues has been in service for many years now, he is a noted at being extremely efficient at administrative duties. Along with that he has become a trustworthy confidant of McCallister as well as godfather to the captain’s three sons. Court has considered about becoming an officer, but enjoys his work in the enlisted service. No longer is he the young administrative that joined McCallister back in 2386, this seasoned officer is known to be able to hold himself against officers who think they are greater than him. That said he is well-liked by many. 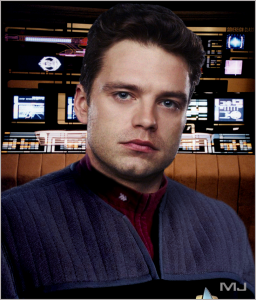 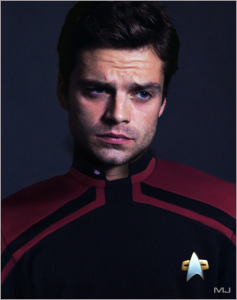 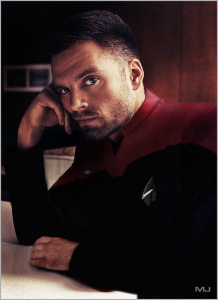 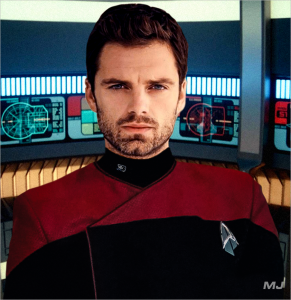 Born in Ottawa on Earth, Tobias Court was the only child of Alexandra and Winston Court. From birth, he was doted on by both, and there was always plan for the direction that his life would take. His father was his surgeon and his mother was a sociologist, and both of them had a desire for him also to enter academia. As a small child, he was sent to the best private schools and was afforded little time for recreation, though he did pick up fencing and chess during High School.

With high grades up through secondary school, his mother secured him a place at the University of Ontario, hoping that he would major in a science. Instead, he chose to study literature, much to the chagrin of both parents. Even though his life was still under a great deal of constraint by his parents, he found the college experience to be immensely entertaining, due to the fact that he had the chance to study what he wanted.

Upon enlistment, Tobias was sent to the Starfleet Enlisted Training Facility on Mars, which suited him fine. In his early training, he found himself somewhat unprepared for the amount of physical exertion that was expected during basic training. As an only child who was used to having his own room, he found sharing a barracks space with 39 other males also to be something of a cause for pause, but he managed his way through six months of basic training.

He selected Clerical and Administrative Services as his specialization, and underwent a further six months of training, learning the proper form to put reports in, etiquette of various Federation member worlds, and how best to ensure the smooth running of the minutiae of a Starfleet command structure.

Upon promotion to Crewman, he was sent to Starfleet Command, where he worked as a Junior Administrative Assistant on the staff of the Deputy Chief of Starfleet Communications, where he saw to the needs of visiting dignitaries, helped arrange conferences and briefings, and further learned the ropes of Starfleet service. After a year, he was promoted to Yeoman Third Class, in which capacity he served as the Admiral’s receptionist, primarily. He enjoyed this job, because it allowed him a lot of free time to read and write, while also being able to interact with a wide variety of beings.

As he worked longer and longer at Starfleet Command, he began to desire the opportunity to experience what most want, when joining the fleet – service on a vessel of

exploration. He consistent service record of reliable service, made him a good candidate for such service, and his transfer request was granted in the form of an assignment to the newly refitted USS Triton as the Yeoman to Captain James McCallister. Court worked extremely well with Captain McCallister and the two would share a weekly session in the ship’s gym in a fencing session. In mid-2386 the captain taught Tobias how to play velocity and they would add this to their interests they would share on a weekly basis. Court had been noted by many being able to anticipate the captain’s needs exceptionally quick. While on Triton, Tobias began to date the ship’s Gamma Shift Operations Officer Ensign Lukiz Smith. Being part of Lukiz’s group of friends, brought the enlisted man out further. T’Rani, the gamma shift’s flight control officer, started to give Tobias flying lessons on the holodeck. She noted he was a natural in his first attempt. When he wasn’t on duty, or hanging out with Lukiz, Tobias volunteered to undertake training within the security division.

By the end of the year the captain had been impressed with his yeoman’s eagerness to better himself, so as way to recognise this he promoted Court to Petty Officer First Class and recommended him to consider taking his enlistment training service further. He gave Court a year to work towards in becoming a Chief Petty Officer. Court had accepted the challenge with confidence. Around the same time, the ship was given orders to rescue the Federation colony on Kovar and Deep Space 19 from being attacked. However their efforts resulted in the Triton coming under fire instead and was inflected with heavy damage and mass causalities. Court ended up taking the helm of the Triton during mid-battle while McCallister was forced to take a position at the tactical station due to those at those stations being injured. Between the two of them, they were able to avoid the ship being lost and won the day. For his valour at flying the ship mid-battle, the captain awarded him with a commendation in his permanent record.

While the Triton was taking to the Beta Antares Shipyards for major repairs, the entire crew were re-assigned elsewhere. Captain McCallister, offered Tobias a position on the new USS Odyssey. Not only would he be his yeoman, but he would also take up the position of Chief of the Boat. Overwhelmed by the encouragement and vote of confidence from McCallister, Court felt he could not turn the man down. He agreed. Sadly though Tobias’ relationship with Lukiz ended. Lukiz, during the battle to save Kovar and DS-19, underwent emergency surgery to become host to a Trill symbiont. This joining ended up changing Lukiz and he needed to work out who he was. To avoid heartache on Tobias, he felt it was best they called it a day. Distraught by it all, Tobias finally accepted Lukiz’ position and watched as he left to return home to Trill.

Returning to Earth prior to the launch of the new Odyssey, Tobias was able to see his family and share with them his experiences. Eventually he joined the new ship a few days before it left the San Francisco Shipyards.

The new, bigger ship was a challenge for him, but he rose the occasion as McCallister had predicted. By mid-2387, McCallister made a personal request that Tobias become the godfather to his recently born triplet sons. Not needing any time to think about it, Tobias agreed to look out for his new godsons: Theodore, Alfie and Henri. Automatically he become ‘Uncle Tobi’ and the three boys adored him.

The following year, Odyssey lost McCallister when he left to take command of the USS Avenger for a year. Court remained on the Odyssey, assisting Commander Zack Hawkins (the first officer) in running the ship in the captain’s absence. During this time, the ship was given quite a few easy and mundane orders within the confines of the Federation space. As a result the crew morale started to dip. Court took on the role of morale officer and working with others began organising weekly events on the ship for people to attend. From movie nights, to musical performances, to velocity tournaments as well as celebrating a range of festivals from across the Federation’s multi-cultural backgrounds. He ended 2388 by dressing up as Father Christmas for the children on the ship.

The captain returned and was impressed at how well Court had kept the crew’s morale up during a difficult period of time. In 2391, after Commander Hawkins’ departure, after making Cambil his first officer, the captain promoted Court to Senior Chief Petty Officer. It was around this time also that Lukiz returned to the fold, no longer the same man since his joining. Court and he decided that for now they would remain as friends. Something that Tobias preferred as he had already started to see others.

By 2399, Tobias is known as the ‘power behind the throne’ among the enlisted crewmembers due to his close relationships with the ship’s three most senior officers: Captain McCallister, Commander Cambil and Commander Reyas. Court would often babysit his godsons and recently has started to take an interest in history and archology, thanks to Commander Reyas sharing with him her field of expertise. The two would often talk about various periods of time from different cultures over coffee. If he was sharing a meal with McCallister and Reyas, then he would be having a game of Bajoran Springball with Cambil.