Tremt Hunsen, is a Starfleet officer and the current chief engineer of the USS Odyssey. A pilot turned engineer, Hunsen is known for his solemn approach in dealing with engineering problems. In recent years, he has developed the reputation as being on of Starfleet’s “miracle workers”, due to his wide range of technical and engineering skills, experience and resourcefulness. Hunsen is also quite known in Betazoid society due to his family coming from one of the prestigious houses. This is a matter he rarely shares with others, as he avoids it becoming a label for him. He is in fact the de-facto head of the Seventh House of Betazoid, a title that is rarely given to a man in Betazoid society. 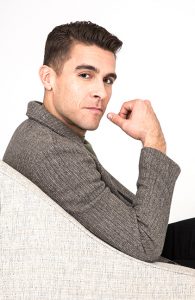 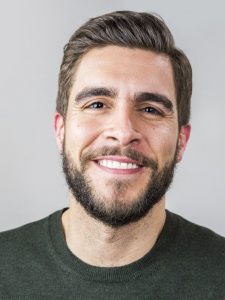 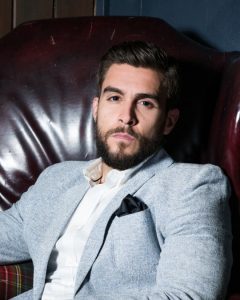 With an almost square jaw line, Tremt is quite a good-looking man for his age. His narrow and thin lips almost make it look like he is always serious, but he is known to have an attractive smile. As he has got older, Tremt has opted to grow a light beard. He was fed-up of always being told he looked babyface after he left the academy. His sleek, almost shiny dark brown hair is sleeked back in a neatly combed style with a parting on one side. If it’s not this style then sometimes he opts for a close shave on both sides and a lot shorter on top. Though tall and broad in the shoulders, he does his best to maintain his build but is not a regular in the ship’s gym. The amount of exercise he does in his job through heavy lifting of machinery, or having to move through tight crawlspaces, allows Tremt to keep himself physically active on a daily basis.

Born in Rixx, the capital city of Betazed in 2361, Tremt came from the Seventh House of Betazed. Coming from one of the influential and richest families of Betazed, Tremt would later on come to resent his parents for not being actively involved in his childhood and teenage years. Both of his parents held high offices in the Betazed government and when he did see them, it was normally to be involved in some sort of function or event that would be closely linked to their political lives. As head of the household, Tremt’s mother soon discovered she could not have children after Tremt. This resulted in her becoming quite insufferable with her approaches with him. Referring to him as her “little prince”, her extravagant and over the top mannerisms rivalled many other women who held high positions within Betazoid society. By the time he was a teenager, he was eager to attend the Cataria Boarding School for Boys. Rarely did he go home, except for significant Betazoid holiday or when his parents needed him around to promote their family at a political event. While at Cataria School, he excelled in all areas of the curriculum as well as extra-curricular.

Unfortunately for Betazed, the planet was invaded and occupied during the Dominion War. Many Betazoids, especially those who were members of the bigger houses were either captured or went into hiding. Due to his parents holding such important position with the Betazoid government, to protect Tremt, his headmaster altered his surname on official documents and informed the occupying force that Tremt was his own son. The school was left alone for most of the four months that the occupation took place, however a number of the faculty members were taking to nearby slave camps. Eventually, Starfleet liberated the planet from Dominion forces. The cost of the liberation was a high one for the Betazoids. As they had used their telepathic abilities to overwhelm the Jem’Hadar, this ended up killing or hurting over forty percent of the general Betazed population. Sadly, for Tremt, both of his parents gave their lives to aiding the Betazed resistance movement in this act. As a result of this Tremt automatically received the title of: Son of the Seventh House, holder of the Blessed Sceptre of Rixx, heir to the Divine Regal Sword of Betazed. His family heirlooms were recovered from his parents’ large estate and sent to him at Cataria. Instead of returning home to conduct the Right of Appointment to his new title, he decided to remain at the school to conclude his studies. After so many of years of hating his parents for not always putting him first, he started to change his thoughts and feelings about them after their sacrifice. He started to reflect on his childhood and perceive his parents in a different way then before.

In his senior years, he was voted as Head Boy by his peers and would go on to captain the school’s swimming, diving, fencing and archery teams. He was also a member of the athletic team, winning the Azure Peaks marathon. Not only did he engage with sports, he joined the science, computing and maths club – something he strangely enjoyed for most of his time at Cataria School. In between all of this and his studies, he used his position as Head Boy to run charity events to raise funds and awareness of those on Betazed who were either homeless or had suffered great losses because of the occupation. When he graduated, he decided to apply to Starfleet Academy as he felt he could do more work being part of the forces that saved his people from long-term Dominion rules. Nevertheless, before he left for Earth, he undertook the Right of Appointment to become the head of the Seventh House of Betazed.

Entering Starfleet Academy, Tremt was unsure what field of specialism he wanted to enter. He knew he didn’t want to do anything to do with the sciences, eventually he decided to opt with starship piloting with engineering specialism. Through his first and second years, he was successful in his academics and in his third year, due to his test scores, he was offered to join Red Squad (the Academy’s elite training unit). Initially he accepted, especially as many of his instructors had insisted that since the Valiant disaster there were a number of new protocols put in place to prevent Red Squad cadets from being overwhelmed or developing arrogant attitudes. A year on the Squad and Tremt placed a request to leave it. He hated the fact that even though his teachers worked hard to prevent mind-sets of superiority and overconfidence appearing on the teams, behind the scenes his peers were egotistical. It reminded him too much of the events he would be forced to attend as a child with his parents. He impressed a number of his instructors and professors for walking away from Red Squad for his last year. His actions resulted in a number of reviews and changes taking place in the Academy system as well as other cadets deciding to leave too. 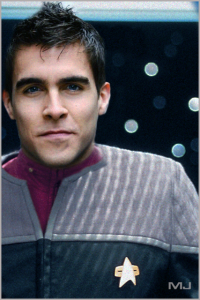 When the Luna-class starship USS Triton was looking for new crew in 2382, Hunsen applied to join the ship’s flight control department as chief shuttlecraft pilot. A year later, when Captain Evelynn Vangelos saw how much of a natural pilot that he was, Hunsen was made the flight control officer for the gamma shift. Tremt would remain in this position for the next three years and by the end of 2386 was eventually promoted to lieutenant junior grade and made assistant chief flight control officer by Vangelos’ successor, Captain James McCallister.

When he wasn’t flying the ship, he was assisting in main engineering, continuing his passion for the technical side of life. On many occasions he would help in engineering with a problem or with repairs. He and the assistant chief engineer developed a good friendship.

After the Triton was heavily damaged in a mission to save the Federation colony on Kovar and Deep Space 19, Captain McCallister was ordered to take command of the brand-new prototype ship, USS Odyssey. With his transfer, McCallister decided to bring with him a majority of the Triton’s crew with him. He decided to bring Hunsen along with the rank promotion to lieutenant to be the ship’s chief flight control officer.

Until 2388, Hunsen flew the newest ship that Starfleet had to offer and enjoyed every moment of getting to know how she worked. When he could, Hunsen would work on the ship’s range of auxiliary crafts to improve them to the best of their abilities. In fact he would spend most of his time working on the ship’s support craft, the Aquarius. Unfortunately, Hunsen was on board the Aquarius during its fateful mission when it was attempting to flee from an ion storm. The ship ended up crash landing on a moon and was buried within a number of caverns. It was during this mission that Odyssey lost its chief engineer and Hunsen’s best friend. He wasn’t the only one who died during this mission, seven others did not survive the crash. Hunsen was left as the senior most officer and was able to somehow maintain the ship’s systems long enough for Odyssey to find them and rescue them from their hellhole.

After his return to the ship, Hunsen became quite distracted in his duties with survivors’ guilt. He ended up spending sometime in counselling to deal with the loss of his friend as well as those under his command. Through this time, he and Counsellor Duncan became close friends.

Being quite the model officer, Hunsen was asked by McCallister to join him on his one-year mission patrolling the Cardassian-Romulan border during their conflict in 2388-2389. Hunsen agreed, feeling that he needed the break from the ship. 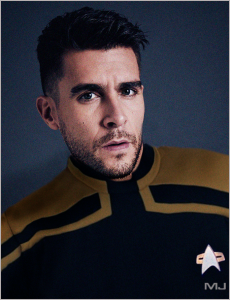 Expecting to be just flying the ship, Hunsen was not expecting to have the captain request he was made his first officer during this mission. McCallister became quite the mentor for Hunsen, they even shared their passion for starship systems. Spending some of their off-duty time, undertaking work on the older Defiant-class ship. Ultimately the mission was accomplished and at the end of the year, McCallister asked Hunsen to return to the Odyssey with him as the ship’s chief engineer. It was a position that had not been filled and McCallister felt that it would prove some closure for their pilot to assume the duties of his friend and honour him. Hunsen agreed and was promoted to the rank of lieutenant commander upon their return.

Returning to the Odyssey was at first daunting for the newly appointed chief engineer. Nevertheless over the next decade, Hunsen established himself as quite the miracle worker and proved to McCallister he was the right person for the job. At the start of 2399, wanting to expand his wings further he put a request into undertake the advanced bridge officer exam with his friend, Counsellor Duncan. Both men passed with flying colours and were promoted to commander. As Duncan would spend more time on the bridge than Hunsen, the engineer agreed to take on the role as fourth officer. As the ship had such a large crew, responsibilities were shared among many of the senior staff for personnel matters.