To end the Omega Crisis, the network of the ancient Tkon facility known as the Vanishing Point must be restored, wherever its beacons can be found across the whole galaxy

With new findings on the Tkon pouring in from across the Fourth Fleet, Starfleet Research finally understands the Omega crisis – its cause, and how to end it.

Aeons ago, the Tkon Empire moved the Horizon system to beyond the outskirts of the galaxy and constructed in orbit of the star a massive and powerful facility called the Vanishing Point. This facility is believed responsible for creating and maintaining the Galactic Barrier itself, the energy field making travel beyond the Milky Way impossible. Calibration of the barrier has been achieved, in part, by a galaxy-spanning subspace network that connects the Vanishing Point to a series of Tkon-created and placed ‘beacons.’ These beacons have for epochs provided the Vanishing Point with the geospatial data essential to maintaining the form and strength of the Galactic Barrier.

Some have been stumbled upon by Starfleet ships as they race for knowledge of the Tkon. Others discovered in records recently brought to light. Some, still, have their location only suspected. They are scattered all over the galaxy, aboard deep-space installations, amid ruined Tkon surface compounds, cast deep underground or to the bottom of oceans or in the hearts of stellar phenomena.

Wherever Starfleet has a lead on a beacon, a team must be sent. Despite any local opposition, danger from old Tkon defences, or natural dangers, the crew must secure a beacon, and repair it or re-establish its connection to the Vanishing Point. Only then, with the Galactic Barrier’s integrity restored, can the Omega crisis end.

– To proceed with all haste to the location, confirmed or suspected, of a Tkon beacon.
– To repair any damage to a beacon and re-establish its connection to the Tkon subspace communications network.
– To take all necessary measures to restore the Vanishing Point and end the crisis, in accordance with the Omega Directive’s superceding of all General Orders.

– Records have pointed a ship to a Tkon beacon in deep space – but it lies at the heart of an intense and unusual stellar phenomenon that will need navigating.
– A Tkon beacon sits at the centre of a pre-warp civilisation’s city, and has become an ancient and cultural icon for these people.
– On a Tkon border outpost, a beacon is protected against outside interference by defence systems left by the advanced and ancient civilisation.
– The Klingon Empire have granted Starfleet permission to access a beacon within their territory – but have insisted on a joint mission, the crews forced to work together.
– A deactivated beacon in a Federation archaeological archive has been identified. Can it be restored and reactivated here, or must it be returned to its original location – wherever that was?
– The ruins of a Tkon city house a beacon – but accessing it requires convincing the suspicious Tkon guardian, a ‘Portal’, of the worthiness of Starfleet’s presence.

There are, of course, many more possible stories. If you need help coming up with ideas, please contact the Lore Office!

While some of you may have written stories in Phase 2 that can directly lead to a beacon, it’s perfectly fine for a beacon and its location to be a brand new story. Archives and technology discovered in your Phase 2 fictions have been studied by Starfleet researchers, who have from there unravelled the secrets of the Vanishing Point’s network. A ship that uncovered a Tkon relic in Phase 2 can have been given a whole new heading for a beacon in Phase 3; the pooling of information across the Federation means these stories don’t have to directly flow into one another.

And remember that this is the final phase. This is where your crew can restore a beacon, reconnect one piece of the vast network of the Vanishing Point, and do their part in saving the galaxy. Go big!

We don’t know much, OOC, about the Tkon in general – and very little about their technology, aesthetics, etc. Obviously the Federation has known about them for at least half a century, but all we have seen of them on-screen is a technological sophistication that meets Clarke’s standard of sufficiently advanced technology indistinguishable from magic.

In the Vanishing Point fiction, a beacon has been described as a smooth metal pillar, easily mistakable when inert as a plain sculpture, but with a surface-level holographic display and interface once activated. But beacons may have taken many forms over the centuries or millennia of the network’s construction.

You can get inventive if you want, writing engineers engaging with the complexities of ancient, advanced technology. Or the meat of your story might be about getting to the beacon, which could need something as little as an update to its calibrations or the mundane restoration of its power source. Do not feel hemmed in by anything. What matters is that the beacon, when functioning, should connect to a vast, galaxy-spanning network that provides calibration data for the Vanishing Point to construct and maintain the Galactic Barrier. Anything beyond that point is down to you.

Echoes of the Tkon: Vanishing Point is a series of independent stories all contributing to the greater narrative. Writers will write the stories of their ships and crews responding to the crisis, and the Lore Office will respond to these and advance the Fleet Action’s events.

Any member is welcome to participate in Echoes of the Tkon. Either with your avatar command or as a junior officer team dispatched by runabout, write about your characters in pursuit of a Tkon beacon in need of reactivating. To do this, you should start a Mission on BFMS under this Echoes of the Tkon: Vanishing Point fleet-wide Mission. If you want to write with another member, you can do so! Your ships or runabouts or characters can work together on missions. BFMS supports this.

It is essential to note that Phase 3: Vanishing Point will only last two weeks, not the three as previously, because this is the final stage of the Fleet Action. You should think about the time you can commit to writing, but the BFMS missions can and will stay open for a little while after the FA is over, so people can finish their stories. But think about making this a short and sweet finale. 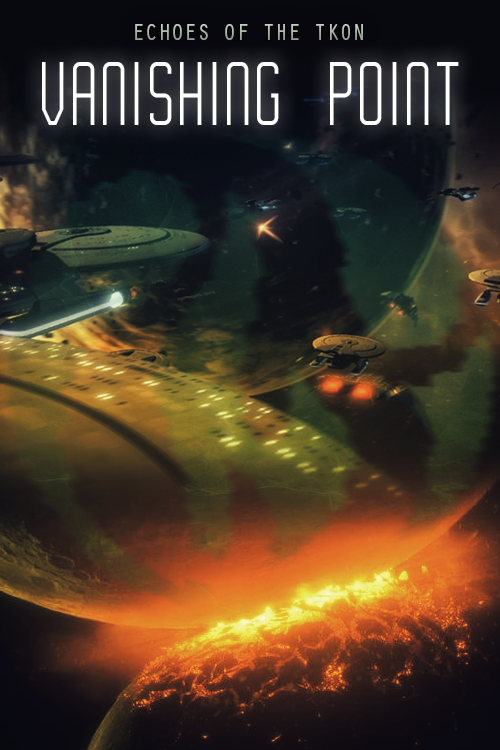