The Heracles receives orders to locate any Tkon Beacons 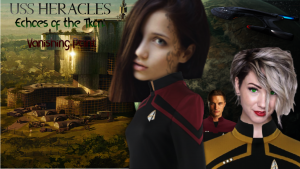 Captain Vausees receives orders that she and her crew are to locate any Tkon Beacons and assets if they are operational to repair and align it with a point called the Vanishing Point, a point that Starfleet has determined to be a location outside of the Galactic Barrier that was set up by the Tkon civilization.

Unbeknownst to the crew of the Heracles, they have already found a Tkon Beacon. Will Captain Vausees and her crew realize this or will they move on in hopes of finding another?

Disguises - Things are not always what they appear to be.

Stardate: 74536.18   Time: 1237 hours   Location: Gamma Quadrant – A Tkon outpost   USS Heracles   Thý’ella sat with Vausees and the entire Senior Staff as they debated and fought over how they could use the Tkon device that Thý’ella had given to Vausees. They [...]