Welcome to the Endeavour NX-06! Our ship, unlike her sister ships which were launched under a banner of peace, was launched in the middle of war. The United Earth Commonwealth stands alone against the aggression of the Romulan Star Empire. Our allies from the Coalition of Planets are not able to stand with us. All that stands between the Romulans’ plan for ultimate control is Starfleet. This is the early days of humanity’s struggle to reach for the stars!

Endeavour was the sixth NX-class ship to be launched with Earth’s famous warp five engine. After fighting on the frontlines for over a year, the ship was in a desperate need for repairs, so when she returned home at the end of 2156 it was decided for her to be updated with a refit as well. After almost four months in dry-dock the ship was ready to return to her mission of winning the war, whatever it takes! 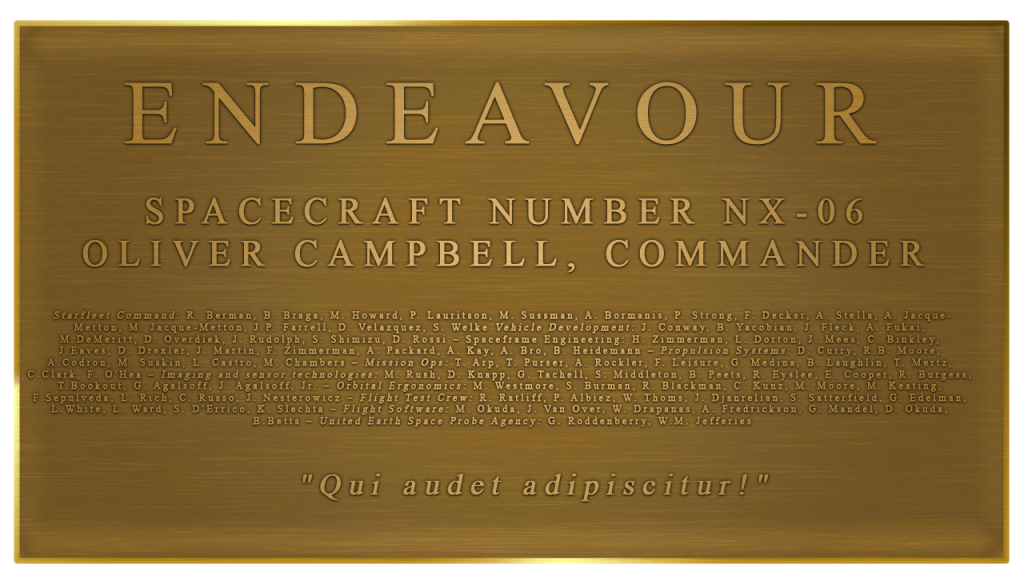 The shuttlepod had barely touched the deck before Leonov’s instructions came through: all remaining senior staff, especially members of the landing party, were to gather in the command centre. By the time the officers arrived, the XO was already in there with all their limited pertinent sensor [...]

That Don't Impress Me Much!

As they were pushed down the corridor, all in handcuffs and chains around their waists that connected each of them to one another, Campbell took in the scene they were in. The setting was some sort of large palace, based on the long granite-like flooring beneath them and the huge walls filled with [...]

Gradually, Campbell opened his eyes and noticed straight away his hands were tied closely together. The captain remembered what had happened by seeing that his feet were also bound together. A group of women had caught him; he looked at his surroundings and soon saw that he was not only just [...]

“Actually, Mr Miller, it was twenty-eight days and seventeen hours,” Leonov said hotly from the command chair to the young lieutenant at Science. “And the Opportunity only passed the Pioneer’s record for furthest-travelled from Earth by point-three of a light-year, while we had first eyes [...]