“…both wealth and concord decline as possessions become pursued and honored. And virtue perishes with them as well.”
― Plato, Timaeus and Critias

USS Atlantis (NCC-90562) is a Sovereign-class starship assigned to the Fourth Fleet’s Task Force 47 and under the command of Captain Tikva Theodoras. Commissioned into service in early 2400 with the decommissioning of her previous namesake, Atlantis continues that vessel’s proud tradition of exploration and discovery while championing the ideals of Starfleet and the Federation. With renewed commitment to once more fulfilling Starfleet’s principal duty of exploration, Atlantis is soon to find herself working on the map’s edge, where adventure and thrills a plenty can be found.

Built on a tried and true space-frame with all the latest technical innovations, Atlantis is well equipped for her forthcoming mission of exploration into the Thomar Expanse. An experienced core crew, fresh faces to round out the numbers and a willingness to go see what’s just past the map edge – these are the voyages of the starship Atlantis…

To explore strange new worlds. To seek out new life and new civilizations. To boldly go where no man has gone before! 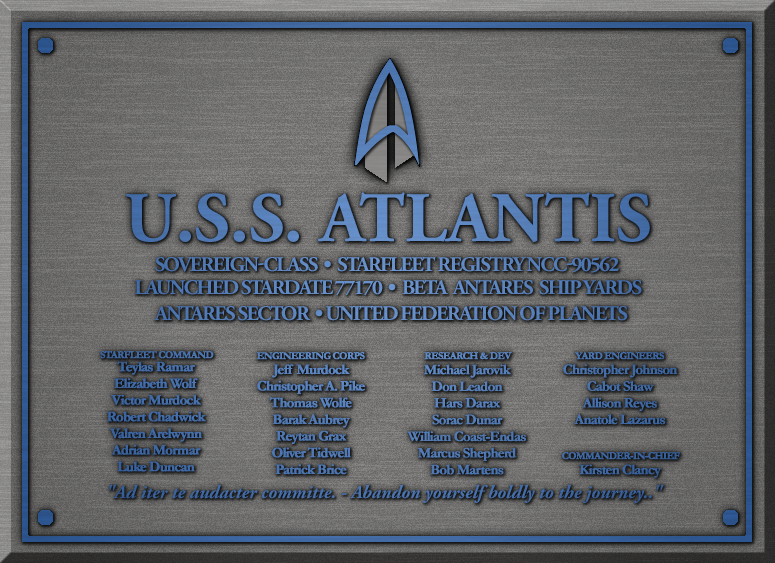 The stories of the Atlantis and her crew are rated:

“Ssshh,” Samantha said to Dimitry as they stumbled into her quarters, the only light in the cabin coming from the red glow of the port Bussard collector, its radiance entering through the window and reflecting off a wall, casting the space in a dim red glow. “I thought you had quarters to [...]

“Lieutenant Gabrielle Camargo, front and centre.” The captain’s voice was clear across the silent mass of people gathered in Port Royal. Sam could sense motion in the crowd to her right, Gabs no doubt working her way through people at the captain’s summons. “MacIntyre, if you please,” [...]

“You all right Sam?” Gabrielle asked as she sat herself down at the bridge Science I station. While Rrr was sitting at Ops up front, the start of any system survey was usually a bit of a large juggling act, so Samantha Michaels had found herself on the bridge at Ops II. While Atlantis did have [...]

“Sorry I’m late,” Tikva said as she walked into the conference, her entire senior staff already assembled for a meeting that technically should have started five minutes ago. “Little issue that only I could deal with.” “Oh?” Mac asked as he plated a cinnamon roll before sliding it in [...]