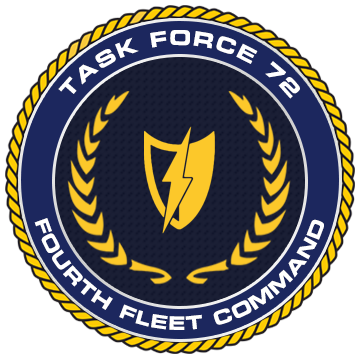 I am 32 yrs old and I've been RPGing since 2005 so 14 years. My first sim I joined was an independent sim called the USS Spitfire, and after that closed I went looking for other writing sims. I stumbled upon several and I went with ACTD where I was until 2013 I commanded two simms the USS Dakota and later the USS Broadsword. I also joined BF back in 2009 and served for a couple of years before I walked away from Star Trek simming after being burnt out. I joined up with a Harry Potter sim in 2013 and I role played with them for a few years before returning to my Trek roots a few months ago.

Task Force 72: New Staff/ New Launch/Moving Forward
Posted by Julius Woodard on May 7, 2020
Good Afternoon Task Force 72!!! It is my great honor to bring to your attention some wonderful details and changes that are happening in our great Task Force. I have a few agenda items that I will speak about in this address, and the first agenda item are our new Task Force Executive Officer and also a newly created position Task Force Chief of Staff (Second Officer). I first of all want to thank each and everyone one of you who submitted an application for this role. It let me know that people are still interested in building storylines, increasing fanbases, and letting me know how serious you all about writing, gaming and Star Trek as a whole. Thank you, thank you, and again thank you.... Task Force 72: Executive Officer Application
Posted by Julius Woodard on April 28, 2020
Since the roll out has been officially completed with updating the website and fully transitioning from just a Sim ran RPG to an over all gaming RPG which includes not only Simming but also Gaming as well; along with the time jump from 2389 to 2399. The time has come to officially announce that Task Force 72 is now taking applications for the open position of Task Force Executive Officer. The duties of a Task Force Executive Officer can be viewed in the link below this official letter, along with your application. All may apply for this position and you do not have to be in Task Force 72 alone, I am opening this up to the entire Bravo fleet community at large. Please feel free to contact...