With the fabric of the galaxy itself in danger, the Fourth Fleet must uncover the secrets of the ancient Tkon Empire

Starfleet Research has identified the source of the Omega particles: the Horizon system, artificially placed outside the galaxy and beyond the Galactic Barrier by the long-dead Tkon Empire. Theorised to be the home of subspace-affecting technology that maintains the Barrier, Starfleet presumes some ancient device is malfunctioning after hundreds of thousands of years, causing these manifestations of Omega. But to begin to understand this device and how to correct it, more information on the Tkon, their technology, and Horizon must be gathered.

What was once a curiosity for a select few archaeologists has become a priority of galactic importance. All databases, libraries, and archives are being scoured by the brightest minds of the Federation, but many secrets of the Tkon remain undiscovered. Any record never before consulted must be scrutinised, and any lead unexplored must be pursued. Starfleet ships are being dispatched to hunt down information on the Tkon – and with the Omega Directive activated, all manner of new avenues are open to them.

Worlds to which access was once restricted by the Prime Directive must now be visited. Systems in foreign territory must be reached, either by subtle infiltration or desperate negotiation. Information on the Tkon in non-Federation hands must be acquired, and for once Starfleet might beg, borrow, or steal to see it done. Whether a crew assists a detailed study of library archives, conducts a swift scan of Tkon technology, or acquires an incomplete databank from foreign hands, every tiny detail might be necessary to save the galaxy.

– To study all available Tkon locations, archives, or technology for information on Horizon.
– To allocate all possible resources to the evaluation of current databanks in light of this new priority.
– To acquire further information on the Tkon in the hands of civilians or non-Federation parties.
– To pursue leads investigating the Tkon that were unavailable before the Omega Directive superseded all General Orders, including the Prime Directive.

– A team is sent to study records on the Tkon at a remote Federation archive too low-staffed to have been yet thoroughly analysed.
– New information sees a crew dispatched to a known Tkon outpost, seeking secrets once overlooked.
– Starcharts suspected to lead to a Tkon world have gone untranslated or incomplete and been ignored for decades. A team has been assigned the duty of deciphering or completing them, and finding to what they lead.
– Black market traders have for years made a profit on Tkon relics but were once a low priority for Starfleet. Now a ship has been assigned to acquire them from these criminal elements.
– The site of a crashed Tkon ship was always known to the Federation, but has gone unexplored as the world is home to a pre-warp civilisation. With the Prime Directive superseded, a ship has now been sent to uncover its secrets.
– A Tkon outpost within the borders of the Romulan Star Empire was identified from records thirty years ago. Access to that world is now paramount, whether a ship needs to negotiate it or conduct an infiltration.
– The Omega crisis is still ongoing, though more ships and specialist teams are dealing with particle outbreaks. Tensions may still be high between governments, civilians may be finding their lives disrupted, and no explanations are forthcoming from Starfleet for any of their behaviour.

There are, of course, many more possible stories. If you need help coming up with ideas – especially for junior officers – please contact the Lore Office!

Where Phase 1: Omega was focused on crisis relief, Phase 2: Horizon is a race-against-time ‘treasure hunt.’ You’ll have the most fun if your storytelling is about the finding of whatever Tkon world, archive, technology, etc, rather than worrying about what that McGuffin is. The idea is that anything found will be ultimately passed on to dedicated experts so they might learn more about Horizon and Omega from it. It’s only fair to warn you that Phase 3 will focus on the direct use and exploration of Tkon technology and worlds, and if you have grand ideas about dangerous ruins and their ancient protective technology, or devices from a long-lost empire that challenges all understanding, you can make just their discovery the focus of Phase 2, and develop them in Phase 3. In short, if your McGuffin is focused on finding/reaching a Tkon world, you might do well to make that the end point of your Phase 2 story, and save its exploration for later.

Horizon is about the journey. It’s a chance to go full Indiana Jones, deciphering maps and translating lost texts and negotiating with rivals to get to the prize first.

While exploring the deepest nuances of Tkon lost worlds and technology can be delayed until Phase 3, Horizon is obviously about chasing up leads on an ancient empire dead for hundreds of thousands of years. We have a wiki article summarising Trek and Fleet canon information about the Tkon, as derived largely from the TNG episode ‘The Last Outpost’, which is the only confirmed screen appearance of the Tkon. You might notice it’s not very long – and you should consider that a feature, not a bug!

Where are Tkon worlds? What were they like, what purpose did they serve? What wrecks of lost ships, what scattered Tkon technology, has drifted or been buried between countless stars? The Tkon Empire stretched across vast distances and lasted multiple lengthy ages. In short: so long as you abide by the known canon, the sky’s the limit for what world or device or map or archive your story can pursue. The immensely powerful technology of a vast and long-lived empire is an opportunity for huge diversity in culture, development, and your own ideas. Be imaginative, be bold – or just go on an old-fashioned treasure hunt, where X marks the spot!

Echoes of the Tkon: Horizon is a series of independent stories all contributing to the greater narrative. Writers will write the stories of their ships and crews responding to the crisis, and the Lore Office will respond to these and advance the Fleet Action’s events.

Any member is welcome to participate in Echoes of the Tkon. If you have an avatar command, you can write the story of your starship and crew seeking knowledge of the Tkon. If you are still a junior officer, you may still write about a research mission, or an operation in an archive facility. Either way, you should start a Mission on BFMS under this Echoes of the Tkon: Horizon fleet-wide Mission. If you want to write with a member, you can do so! Your ships or runabouts or characters can work together on missions. BFMS supports this.

If you want to write something other than Starfleet operations, please consult the Lore Office. The focus of the Fleet Action is the 4th Fleet and its adventures. This is particularly relevant where non-Starfleet characters should never find out about Omega, and thus be unclear on the current crisis.

It is essential to note that Phase 2: Horizon will last three weeks for fiction-writing. On September 4th, Phase 3 will begin with the last of the story. You should think about the time you can commit to writing, and aim to finish writing Phase 2 within the period. As above, because Phase 3 will focus on using/understanding Tkon technology and ruins, finding a Tkon outpost or world might make a good end-point for Horizon, while exploring it can wait for later. But otherwise feel free to find your lost library codex, your Tkon relic, your lost records on Tkon technology, within the bounds of Phase 2.

It’s still just 3 weeks, so be sensible about your scope and pace! As ever, the Lore Office will happily provide support, feedback, and suggestions if you find you’ve bitten off more than you can chew.

In the meantime, Happy Tkon Hunting! 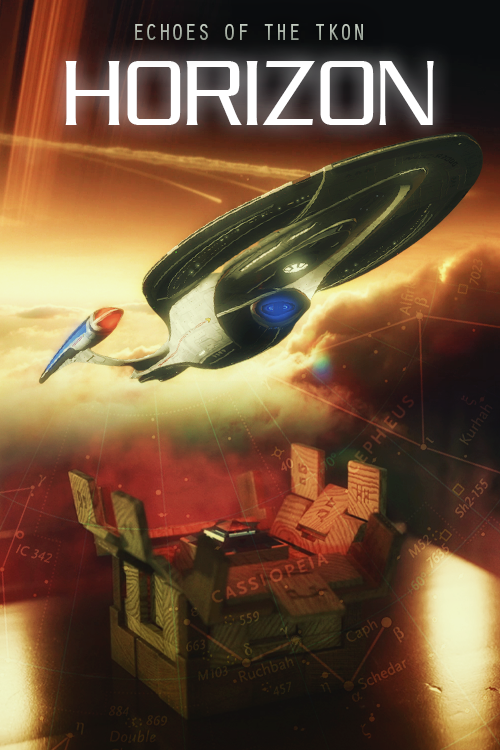