The Europa is one of the original twelve Luna-class vessels ordered by Starfleet following the Dominion War. This class was designed to be a 24th century equivalent to the venerated Constitution-class, a heavy cruiser capable of truly independent years-long missions. 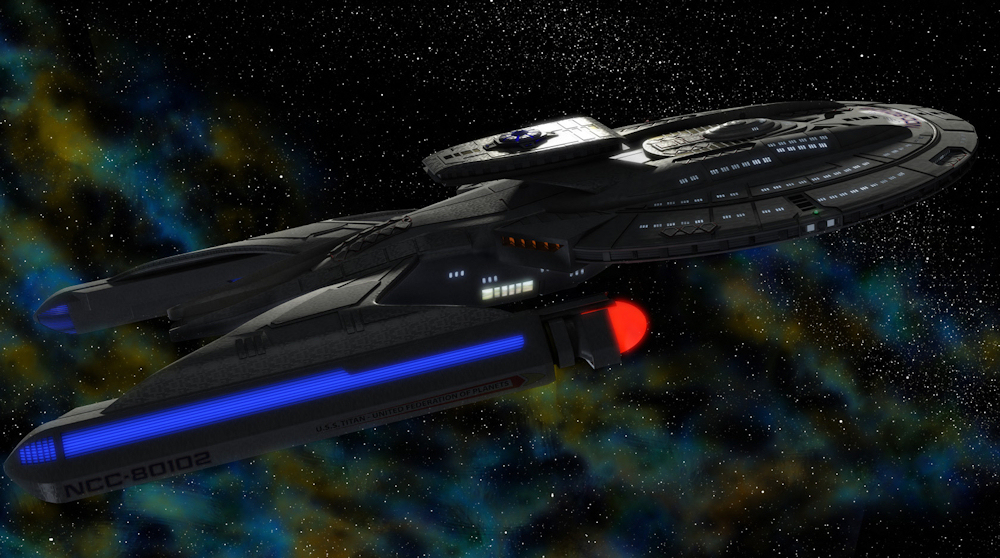 Following the destruction of Utopia Planitia and the burning of Mars in 2385, Starfleet’s brief postbellum return to long-distance exploratory missions was put on hold. Instead of reaching outwards to strange new worlds, the Federation pulled in on itself to safeguard its own enormous borders and so Starfleet was put on a largely defensive posture. This all changed in 2399, however, when the Fourth Fleet was given the mandate to spearhead a renewed focus on Starfleet’s core purpose: exploration.

The Europa is one of the original twelve Luna-class vessels ordered by Starfleet following the Dominion War. This class was designed to be a 24th century equivalent to the venerated Constitution-class, a heavy cruiser capable of truly independent years-long missions. She was first commissioned in 2380 and had an extremely successful five-year mission in the Gamma Quadrant, but then was reassigned to diplomatic duties in the Alpha and Beta Quadrants along with the bulk of the exploratory fleet in the late 2380s.

Now, in 2399 under a new captain, the Europa is ready to set off on her next five-year mission into the unknown!

Some time after the Away Team mission Akira stepped into her quarters and as the two halves of her door closed, she pressed the lock button and then leaned her back against the door. A heavy sigh of relief had left her lips as she tried to recollect her memory of what had happened today. She does [...]

Ashatia made it to engineering, “Lieutenant Sandoval and Ensign Cordon we are heading over to the Eldara. The ship’s main power is offline so we will need EV suits. Get your equipment and head towards the docking port.” Ashatia replied as she headed towards her office to get her [...]

Jolie placed her hands in between the two partially open sides of the door and looked back at Rowe. “Give me a hand with this Lieutenant,” she said as she began to try and pry the two halves apart. Had made sure the light she was given was secure on the back of her wrist before putting [...]

Natalya had made sure to round up her team and make sure each one of them was armed and suited up before they made their way over to the Eldara. She had taken the main group to search the ship, but she knew that if needed she could always contact the Fleet Captain. The group arrived on the ship and [...]