Commander Jack Conrad has bailed his helmsman and navigator out of the brig and broken bad news to a friend that his Starfleet reserve status had been reactivated, and it's not even noon. Will the U.S.S. Phoenix launch on time to begin its important mission of testing new Starfleet technology?

The year is 2288. The cold war between the United Federation of Planets and the Klingon and Romulan empires is at a fever pitch, with each government putting more and more resources toward the construction of outposts along all sides of the neutral zones separating them.

In an attempt to silence criticism that Starfleet was becoming too military, the Federation Council ordered Starfleet to initiate a starship improvement project with little to no military overtones. Starfleet decided to focus on the workhorse of the fleet, the undervalued Oberth-class scout.

Following an extensive overhaul at Meridian Station, the starship Phoenix can separate into two sections. Its saucer section, which includes the ship’s only shuttlebay, can detach from the engineering section and is capable of planetary landing, acting as a planetside base from which to coordinate planetary survey operations and transmit data to the orbiting engineering section.

Located in the Alpha Lumina star system, code named Meridian for it approximate equidistance between Earth and the edge of the Klingon and Romulan neutral zones. Meridian system is the home of Federation Outpost 68 – Meridian Station. The station orbits Meridian VI, a lifeless moon that houses the ground support base for the orbital station and its five drydock frames. 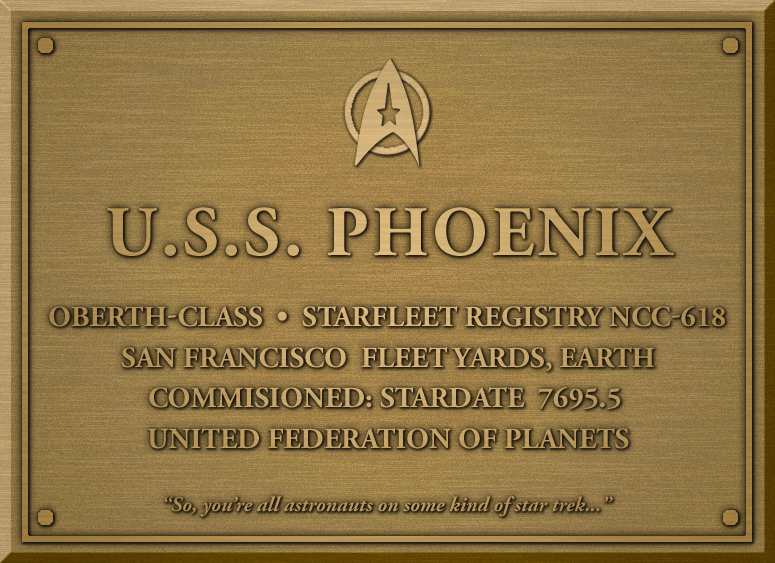 After Jack’s departure, presumably to bail out the Phoenix’s helmsman and navigator, Ned packed up his attache with hardcopy blueprints, and beamed over to the starship, where he made his way quickly to the ship’s engine room. Dr. Madeline Babish, Commodore Seymour Babish’s wife and a [...]

“What I wouldn’t give for my husband’s bad coffee right now.” Alicia Gregory stood in front of the food synthesizer, her hands wrapped around an insulated mug sipping what passed for coffee. “I hear the next software update is going to improve the bacon and eggs formula,” Richard [...]