As the Hunters of D'Ghor attack the Archanis Sector, Endeavour is dispatched to pursue the Kut'luch, one of their most powerful ships - but soon find themselves in a bloody game of cat-and-mouse

Say something to us that we can learn
By heart and when alone repeat.
Say something! And it says “I burn.”
– ‘Take Something Like a Star,’ Robert Frost
Previously:
It has been several months since the USS Endeavour pursued and destroyed the Wild Hunt, believed to be a pirate gang marauding a whole sector in the fringe of Federation space. Only a select few know the truth: the Wild Hunt were a unit from a starship from an alternate reality, perhaps the Mirror Universe itself, the ship trapped in this universe, desperate for a way home, and still somewhere at large. On a campaign of misdirection and espionage to protect themselves, they have a doubtless tiny, but unknown number of infiltrators replacing officers in key positions. Unbeknownst to any, this includes Lieutenant Dathan, key strategic advisor to Admiral Beckett of Fourth Fleet Intelligence.
In the time since, many of Endeavour have made a comfortable life aboard. But it is not without its challenges. Commander Valance has yet to reckon with her complex relationship with her Klingon heritage, and her fledgling relationship with Chief Engineer Commander Cortez has seen them both directed to routine counselling. Meanwhile, Lieutenant Thawn has been wrong-footed by a new arrival aboard: Lieutenant Rhade, leader of Endeavour’s Hazard Team and the near-stranger she is nonetheless expected by Betazoid custom to some day marry.
And any possible peace is soon to be shattered by the drums of war of the Hunters of D’Ghor. 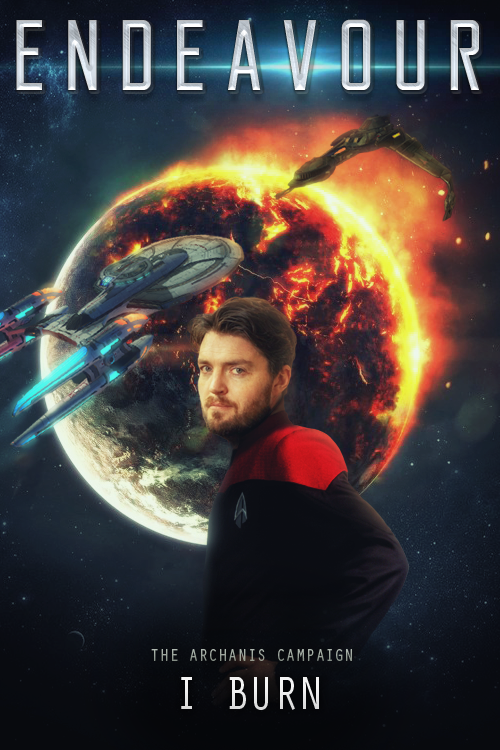 Rourke hadn’t liked Kehinde Hargreaves very much when they’d first met several months ago, and the prospect of him now commanding Beckett’s flagship was not reassuring. But the weathered officer extended a hand as he intercepted him outside the admiral’s new office, a guarded smile on his [...]

‘We’re minutes out, sir,’ came Drake’s brisk report. ‘Boost power to the forward sensor array,’ said Rourke, glancing over his shoulder to Airex at Science. ‘Let’s make sure there’s nothing in our path.’ ‘Our route is clear, sir, up to sixty million kilometres of the fight. [...]

‘This is it,’ said Adupon, gripping the pool table console in the heart of Main Engineering. ‘This is how we’re going to die.’ Cortez flashed him a grin. ‘Live a little, Addie.’ She bent over the system, chest tight with anticipation. ‘Warp 9.98… 9.985…’ In the space between [...]

Elsa Lindgren had seen combat from a starship bridge before the D’Ghor came to Archanis. Even prior to the disaster at Thuecho that had changed Endeavour forever there had been encounters, however brief, however fewer than those where Captain MacCallister had talked down opponents. There [...]