I always have felt strange when we came home
To the dark house after so long an absence,
And the key rattled loudly into place
Seemed to warn someone to be getting out
At one door as we entered at another.

The USS Endeavour, after suffering heavy losses in an ambush by the Wild Hunt pirate gang, has been forced to take on new crew – some of whom find themselves at odds. But this mismatched group of officers have still been charged with pursuing the Wild Hunt. At the agricultural world of Lockstowe, Endeavour found a world left abandoned by Starfleet and terrified of the pirates, handing over supplies and even hostages at gunpoint. The Wild Hunt attempted to lure Endeavour away to board and attack her and raid Lockstowe, a bold gambit to show their strength. They were ultimately thwarted, but pirates took their own lives before they could be taken captive, the others fleeing. Quick work by Operations Officer Lieutenant Thawn has, however, given Endeavour a warp trail to follow – leading into Klingon space. 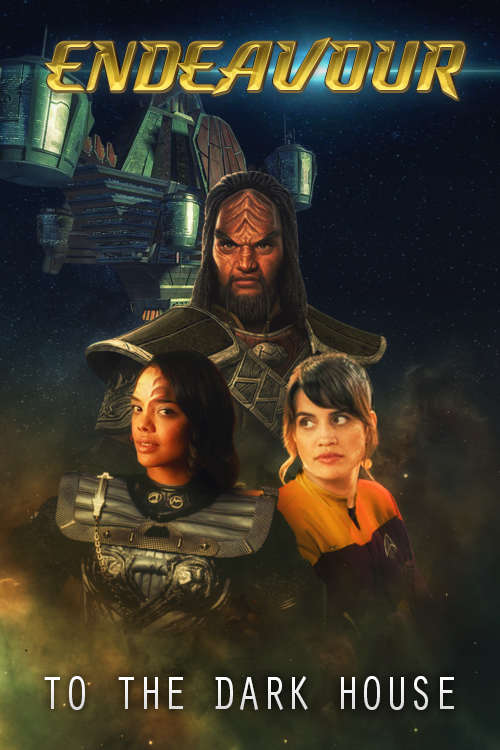 ‘Whisky. Islay single malt, to be precise.’ Rourke put the tumbler on his desk in front of Torkath. The Klingon picked up the amber liquid and had an experimental sniff. ‘This is what we drank last time?’ ‘That was a Speyside. This is more peaty.’ ‘Hm.’ Torkath lifted the glass. [...]

Less to the Imagination

‘So how does this work?’ said Cortez, pacing in the corridor outside the bunkroom they’d been able to commandeer on T’lhab. Thawn had reported their rescue by the Orion crew, and at the same time the King Arthur’s attackers had been driven off, Dakor had abandoned his attack of Torkath. [...]

Across Many Suns and Stars

‘You’re back, Starfleet.’ Olgren, skipper of the Orion mercenaries of the Lancing Juggernaut, looked surprised to see Cortez pull up a stool opposite him down in the Cluster. ‘Olgren. Big Kitta.’ Cortez pushed the tray of drinks across to them. ‘I’d give you all the pleasantries, [...]

I don’t know why I’m here, Cortez thought as she followed Valance and Lindgren through the door into Korta’s personal chambers on T’lhab Station. Whatever his formal role for the Brethren, it had to be important enough to grant him multiple rooms, and they were received in a more intimate [...]