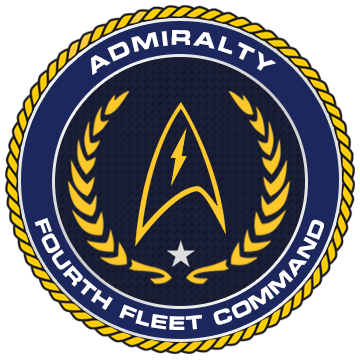 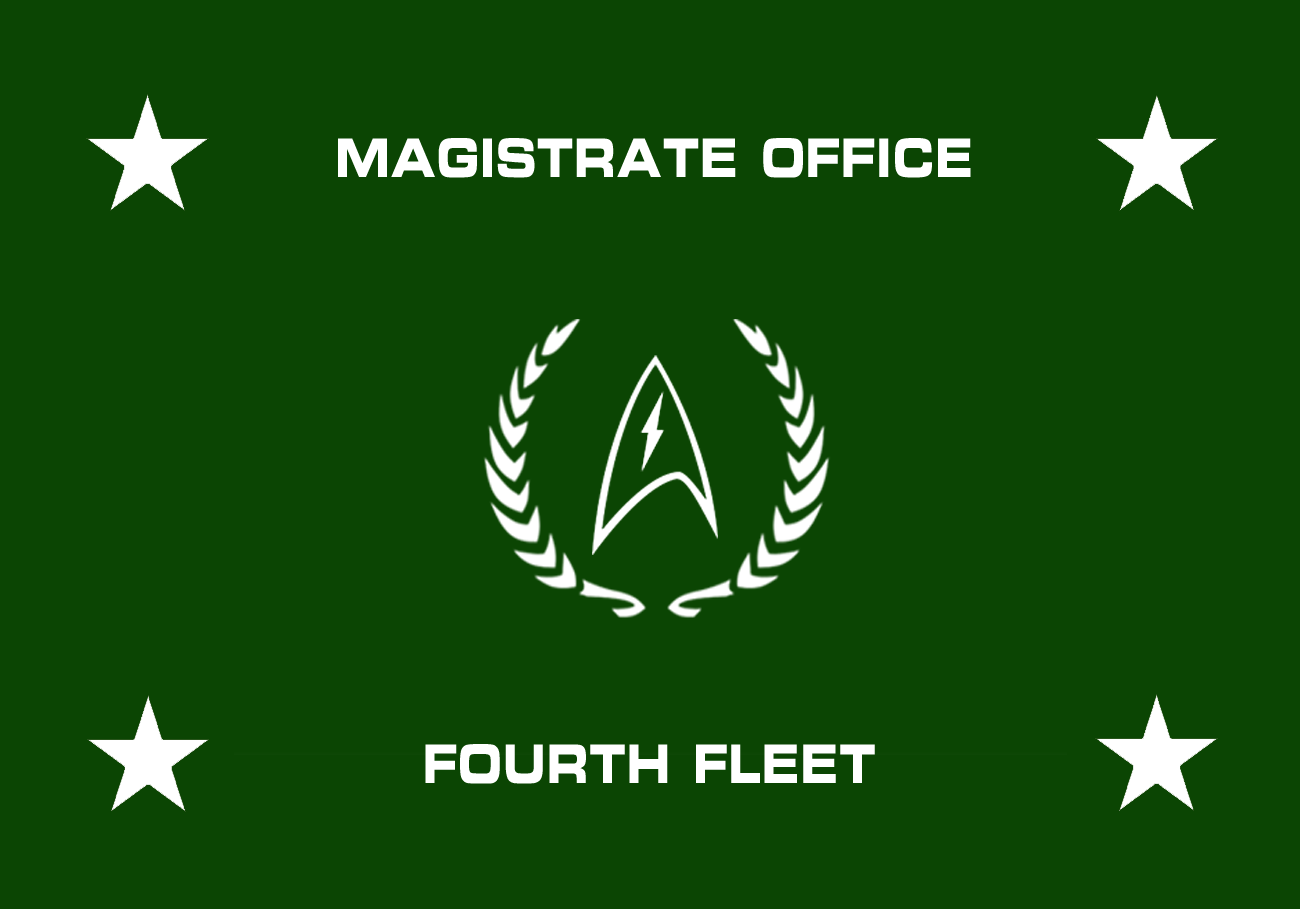 Flag of the Bravo Fleet Magistrate

From http://roleplay.wikia.com/wiki/Mike_Bremer - Mike Bremer is a Star Trek simmer. He founded Bravo Fleet in 1997 and served as the group's commanding officer from December 1997 to March 2004. Mike left Bravo Fleet in 2008. He continues to host Starbase 400, a sim that has been in continuous operation since 1995. In 2011, Mike was awarded the Simming Prize in honor of his "exemplary leadership within the simming community." Mike was asked by Chas Hammer to become a Simming Prize Trustee in 2014, helping to review nominations and award the next generation of Simming Prize Laureates.

"Mike is Mr. Star Trek simmer...If anyone were to ever construct a Mt. Rushmore of simming, Mike would be included." -Chas Hammer

"In addition to his superior leadership of Bravo Fleet, Mike Bremer has also hosted one of the longest continually running sims on the net, Starbase 400 (previously known as the USS Pegasus), since 1996. Starbase 400 has been in existence since 1995 and has won numerous awards for its high-quality and longevity under Bremer. His pioneering models for club and sim development live on throughout the community. Mike Bremer is unarguably one of the most influential figures in simming history." -Ongoing Worlds 2015

Outside of Simming, Mike is from South Carolina and is married with three children. He's a Christian, loves sports, and played football and baseball before injury ended his career. Mike is an avid fan of the Clemson Tigers, Carolina Panthers, Miami Heat, and Atlanta Braves. He also enjoys playing games on XBox including Battlefield, Call of Duty, NCAA Football, and Madden.

Mike enjoys movies and shows like Star Trek (of course), 24, NCIS, Law and Order SVU, The Avengers (as well as the prequel Iron Man, Captain America, and Thor movies and their sequels), Band of Brothers The Pacific, Transformers, Star Wars, and the list goes on. Mike is also an avid gun owner and shooter, he has a small collection of firearms that includes a Glock 22, M1 Garand, Ruger LC9, and others firearms. He also loves a wide variety of music.

Mike also used to be involved two car clubs, being the co-founder for both. One was an F-Body (Camaro and Firebird) enthusiasts club and the other was a general club for car customizing (Sound systems, rims, TVs, etc etc), but he had to back away from both due to time constraints (work and family).

Mike is also a proud member of the Forever17 Youth Organization founded by former Clemson football players Stanley Hunter and Jamie Harper. He assists with the small website and events that help low income and at risk youth and their families in the Upstate and Midlands of South Carolina.

“Reason: Starbase 400 is nominated for sim of the month for being a long standing sim that has remained consistent beacon of stability in an era where a lot of sims unfortunately burn bright but fade quickly.

Reason: I would like to vote for Starbase 400, what a great sim, with a rich history. They keep continuing to produce quality stories.

Reason: Starbase 400 won the popular vote for the month of December, and is a strong sim, that continues to produce quality stories, year after year.”

Mike was an integral member of both the Transition Team and the current Bravo Fleet Admiralty serving as Fleet Magistrate. Mike has brought invaluable wisdom, experience, and dedication to the Magistrates office as well as all ongoing BFA discussions. Mike has been, and always will be, a dedicated member and Founder of Bravo Fleet and this award is well earned!

Awarded in recognition of Post of the Month, TF99. “The Assault series was a great write up, it turned into a four part story arc, within episode 100. Mike Bremer, and his team of writers take you on an adventure of Starbase 400 being attacked, and his crew coming together to stop the attack.”

Issued to the CO of Starbase 400, winner of SOTM September 2019, TF99. “Reason 1: Starbase 400, is a very active sim. That has over 20 years of story telling. They are currently working on their historic milestone of 100 episodes. Thi sis one the premiere sims, in Star Trek Role Play writing.”

“Reason 2: Starbase 400 – I just love this sim, how large it is and how well they all write together.”

“Reason 1: Per several members of the sim, FAdm. Bremer was nominated for player of the month. This is SB400’s 100’s episode and SB400 turned 24 years old during this episode. The episode was a surprise for the members and Mike drove the plot. Many players coincided the episode a huge success because of the episodes that built up to it and what the future holds for the sim.

“Reason 2: I 100% agree with the above reason given. As a member of Starbase 400 crew, I can vouch and truly feel that Mike is deserving of this award. He has led his sim for over 24 years, and episode 100 was an incredible achievement. I tip my hat off to him, and glady give him player of the month award for October 2019.”

Starbase 400 has over 96 completed missions, and currently working on 97th mission. Where do I even begin with Fleet Admiral Mike Bremer. A man with 20 plus years of star trek simming. Having one of the longest sims alive in Bravofleet. If not the longest sim in Bravofleet. Mike Bremer’s command leadership is straight and to the point. He is fair to his writers, and allows creativity within Starbase 400.

For each of his missions, he creates an occ chat area on his site, to talk about mission strategies, any new or existing players. He is very active on this occ thread, and with his sim. I can not think of anyone, more deserving of the Gold Star Award, that Mike.

Below you will see a synopsis summary of all the Starbase 400 Missions. If you click on each mission title, you get to read the full mission. Mike Bremer has leadership experience is reflective in all 97 missions. I know this report asks me to highlight a few of the mission logs in particular, before I do that, I want you to see what he has accomplished, so with that.

I wish to honor the crew of the USS Black Hawk. Were it not for them, this sim would not be what it is today. Though we all come from different walks of life, the sim itself is the perfect emulation of IDIC – Infinite Diversity in Infinite Combinations. We have all pushed each other to become better writers, to approach missions from multiple angles, and tell the best stories out there.

Mike continues to help further the fleet as a whole, bring in new members, support the community and be a shining example of what a leader in this group is. Our hats go off to Mike.

SB400 has lived a long and interesting life and the sim continues to still grow and live; that is something to be proud of. The sim continues to live up to and beyond the expectations of the fleet as well as be a shining example of what the organization as a whole should strive for.

Starbase 400 has led the way with the Ares Operational Theater canon within TF99.