The search for Ephrath brings Endeavour deep into Romulan territory, trapped between two powers, the mysteries of the ancient Tkon, and a crisis that still rages

And what rough beast, its hour come round at last,
Slouches towards Bethlehem to be born?

Endeavour has destroyed Omega particles at the refugee hub of Teros, and located the ancient Tkon world of Ephrath, that fallen empire believed to hold the key to technology responsible for the Omega crisis. But it has come with its challenges, Captain Rourke pushed to the brink to drag his splintered staff through the mission before his capture by the Romulan Star Empire, enemies since his orders to destroy the Imperial ship Erem as it sought to steal Omega. Rescued by his crew and set right by those close to him, Rourke has made a tentative peace with his crew, and they with each other, but the job is not yet over.

The galaxy-spanning Tkon network holding up the Galactic Barrier is breaking down and must be fixed to stop Omega flooding the galaxy. Ephrath, a hub of this network deep in Romulan space, must be found. 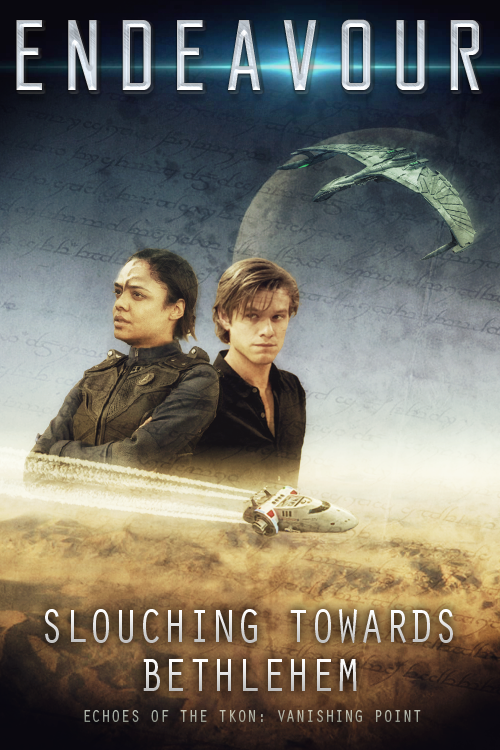 The Devil to Pay

‘You will follow my instructions to the letter,’ said Portal as, with a gesture, the beacon’s interface expanded to a kaleidoscope of lights, displays, and controls. ‘Or our accord will end.’ Cortez’s jaw dropped. ‘Goddamn. The subspace filaments you’re detecting… no wonder you [...]

‘…and I don’t know what else to say,’ Beckett admitted to the Portal. ‘We have to repair this beacon and re-establish the network your creators left behind.’ In the gloom of the lowermost chamber, the Portal regarded both of them with an unimpressed gaze. ‘You are children,’ it [...]

‘You look tired.’ Kharth blinked at the cup of tea set next to her console, and squinted up at Elsa Lindgren. ‘We’re all tired,’ she grumbled, but she took the tea anyway. ‘What do you want?’ Lindgren’s smile was wry. ‘I want our Chief Tactical Officer on the ball with plans and [...]

Wrath of the Skies

‘This facility has lasted for eons, and no savages such as you will claim their prizes!’ The voice from the darkness below reverberated through the underground chambers as Valance landed after rapelling down. She pushed her protective goggles to her forehead and pulled down her face wrapping [...]