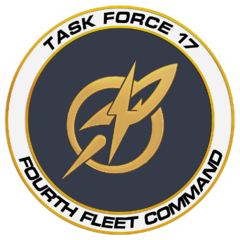 Those of us in Task Force 17 still in the Delta Quadrant are saddened to hear of the difficulties being experienced by those in proximity to the Paulson Nebula.

While TF17 itself is currently poorly positioned to assist, aside from ships that have recently returned to the Alpha Quadrant for one reason or another, we shall lend any and all assistance that we can.

In that light, Sir, USS Nobel has engaged in a detailed survey of an ion storm nursery we have discovered within the Delta Quadrant. We hope that the scans we have made of the conditions that give rise to these phenomena may prove useful in some capacity to the adhoc forces attempting to combat the storms.

What a start to the campaign folks! I’m truly enjoying the story content being produced by all! Keep it up folks!

But what you’re all wanting to hear no doubt is the results of the competitions that TF17 put on for you all! As always we were absolutely pleased to bring those comps to you all and impressed with the turn out!

Big congratulations to all those who entered and for those who placed, your recognition is below! Shiny medals should be winging their way to you shortly folks!

TF17 had a blast putting these together! We’re always glad to put competitions together for BF and have more ideas for the future folks!