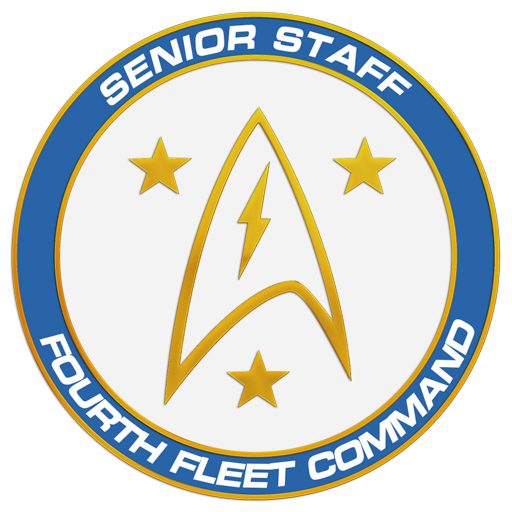 We hope everyone has been staying safe with all the craziness going on in the world, and as always we’re glad that you’ve joined us in Bravo Fleet as a creative and fun outlet to get away from the real world. As always, there has been a lot going on around the fleet and behind the scenes. I’m excited to start showing you some stuff we’ve been working on behind the scenes for a while now, as well as touch on some other topics around the fleet.

A lot of people have recently and often been asking how they can get involved and help around the fleet, and I talked about it in my last report in some detail. Right now we have a lot of open positions from our most recent reports. Some around the task forces. Some around the departments. I want to highlight what we’ve got going on!

Task Force 93 is seeking candidates for the role of Task Force Executive Officer, with the recent departure of Arden due to real-world time constraints. This position is responsible for assisting the Task Force Commanding Officer with the day-to-day running of the task force, including helping develop canon, performing functions related to awards and promotions, and serving as a mentor to other members. TF93 deals directly with the Romulans, so it has a fascinating chunk of canon to deal with, given that it’s the race that we’ve learned the most about in the last 18+ years of Star Trek history.

If you are interested in this role, please fill out an application here or talk to David or Thrace on Discord. Note: you do not need to be a member of TF93 to apply for this role. There are no minimum OOC ranks for TFXOs, however candidates who have demonstrated a strong record of success in reporting their own activity and participating in a variety of fleet activities are likely to be more successful, as those are the items that they will be helping members with.

All five task forces are currently recruiting for Task Group Commanding Officers. The BFA envisions the new TGCO role to be one of members who are interacting with people in their task groups on a regular basis, getting people involved, getting information out to them. On the flip side, TGCOs are going to be involved with learning the ins and outs of task force management, development, and operations. The BFA sees this position as a stepping stone to leadership: one where members are elevated into a position where it’ll give them a taste of what Bravo Fleet leadership is about which allows leaders to evaluate them, but more importantly, for those TGCOs to evaluate if leadership is right for them. In this way, members can make that evaluation without being thrown to the fire, as it were.

Equivalent to Staff Assistants in the departments, these positions are for learning the ropes of task force leadership and for mentoring new members through the mechanics of the fleet once they’ve hit Ensign. If you have no experience at all but want to get more involved, this is a great way to do so, as you’ll get to see how canon creation works, what activity reporting looks like from the staff side, and generally just get a feel for whether or not volunteering to work in a task force is for you. There is no minimum OOC rank for this position, but it’s suggested that one have a strong handle on activity reporting and navigating the fleet to take on this role.

There are 3 positions open:

As Deputy Communications Officer, you would be assisting me in the running the department and collaborating with me on communications office projects (some that have yet to be lifted off the ground). Additionally, I would like this position to be canvassing the fleet to gather great posts and content from our games to promote on our social platforms and to use in recruitment.

As the Staff Officer for Social Media, you would focus on increasing our presence on the fleet’s social media platforms, at the moment Facebook and Twitter. You would be posting information about our stories, our competitions, and our gaming accomplishments!

As the Staff Officer for Recruitment, you would be assisting with recruiting new members to our community through social media, Reddit, discord servers, list servs, etc. Your primary concern will be recruiting for the Fleet as a whole, however, you would be available to help our COs/GMs with recruitment for their own games.

If you are interested in any of these positions, please apply here today!

We’ve been rewriting many of our starship specifications over the last year. The intention has been to write articles about ship classes that don’t focus on how many torpedo launchers are at the fore and aft of the ship, but properly explain things like what a class is good at, how independently it can operate, and what life aboard is like for the crew. We want these to be guides to inspire and advise writers in their storytelling, while still providing what technical detail is necessary (apparently we care more than VOY how many shuttles are aboard).

We are almost done with our articles on Federation ships. We have keen volunteers looking to work on alien vessels. But we would welcome more assistance, particularly with the latter. This would be a temporary role; while this project has taken a long time, we’d like the manpower to not still be working on it in another year. But it’s a great chance to contribute to the Fleet with a useful resource that players will use and refer to all the time!

If you’re interested, please first take a look at some of our starship articles – and remember, we want to produce writing guides rather than technical manuals.

The Next BFMS: Better, Stronger, Faster

As many of you are aware, the software that Bravo Fleet uses to run its website is called the “Bravo Fleet Management Software”, or BFMS for short. Since Emily and I came on as BFXO and BFCO, respectively, one of our biggest goals has been increasing BFMS’ ease of access and use, and making overall improvements to it with the help of JonM behind the scenes. Emily singlehandedly revamped the BFMS software to suit our news for the new model relaunch in April. Once that was done, almost all work on the current version of BFMS other than to fix critical error bugs stopped dead in its tracks.

Since then, we’ve been working behind the scenes to bring a totally new BFMS that isn’t WordPress based and has a lot more functionality. We are getting close enough that I feel comfortable finally sharing details with that. This new version will have much higher automatic functionality on the admin side, a lot of single-click features, a lot of automatic tracking of activities, built-in writing functions for both solo writing and, if you choose, sim writing. In many ways, it will operate the same as what you’re used to, and in many others, you will find it much easier to work with. To give everyone a taste here is what you might expect when you’re logged in and looking at your personal dashboard: 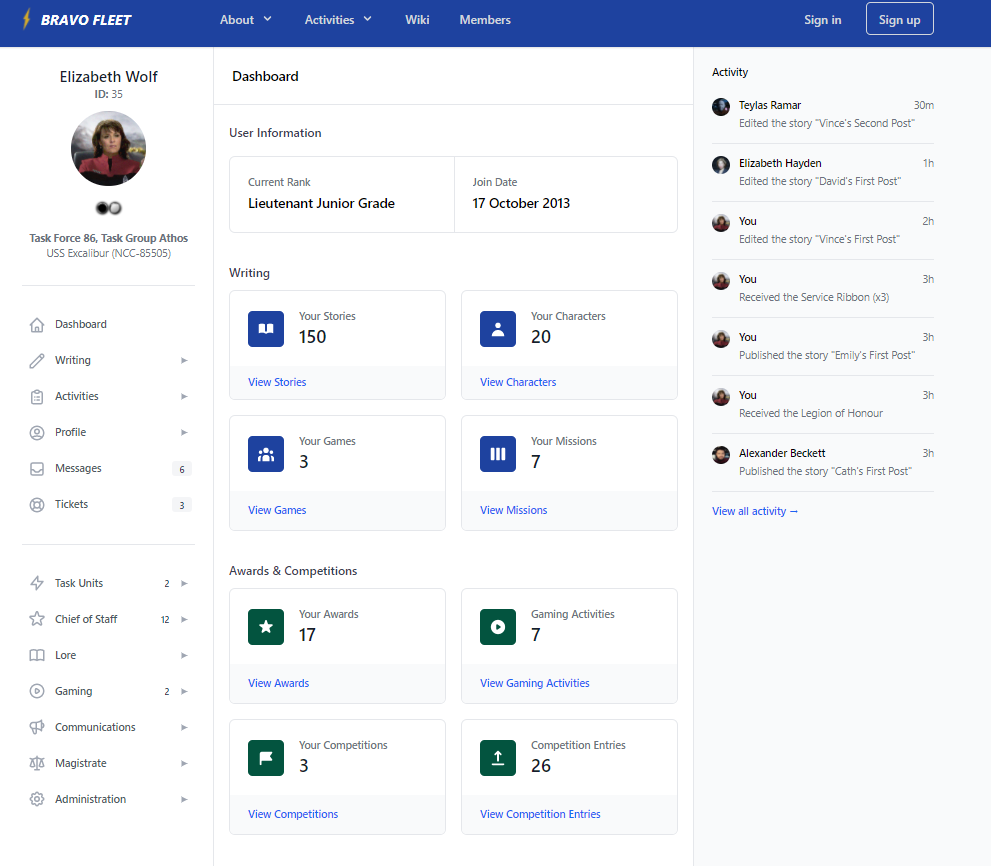 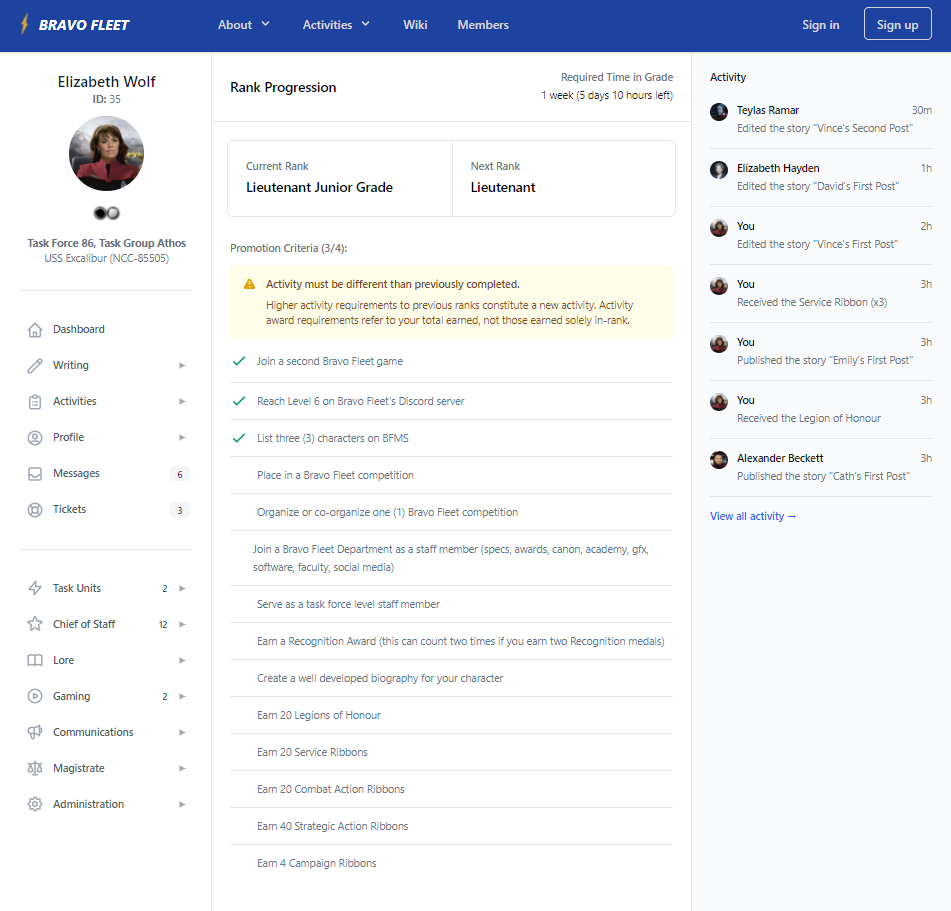 Now, this isn’t to say that everything will be 100% automated. Someone will still have to transfer information from individual Novas into BFMS, and someone will have to manually tick if you join Discord, etc. But for the most part, many many things will be automated and a bunch of ease of life improvements is in this new version.

Look for more of this in the coming weeks as we get deeper into the holiday schedule!

Task Force 9 is running an event open to the entire fleet which has been summarized as:

For our first Task Force-level event, I’m pleased to announce that it’s Ferengi Week! As the most important power in the region we operate in, the Ferengi have their hands in almost everything that we do. So, in the next few hours expect to see a whopping seven competitions involving them to open up! These include a puzzle, a word search, a quiz, a biography competition, a short story competition, and a flash fiction competition, so there’s something for everyone. Though hosted by TF9, these are available to everyone in Bravo Fleet and will run from the 18th of October through 11:59 p.m. on the 25th of October.

The competitions can be found below: