Jamie Nicholas Harris, BA (Hons), is a Starfleet enlisted officer and the Captain’s Yeoman on board the starship Challenger (NX-03). 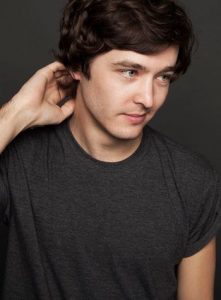 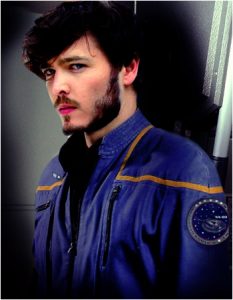 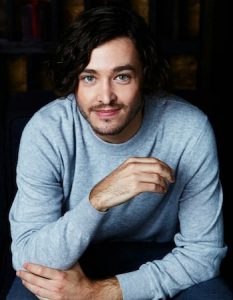 Jamie is well defined and keeps himself healthy and in check with regular visits to the gym, this is partly due to him being an avid swimmer. He always keeps himself smart and presentable at all times. Jamie does have a few tattoos on his arms and chest.

Jamie at first appears quite distant and reserved in the company of the others, with a quiet and dutiful nature like a butler. However once you get to know Jamie his confidence starts to shine and becomes quite relaxed in the company of his friends. He is known to flirt with and charm those he is comfortable with too.

Jamie is extremely loyal to his work and has been known to put it first before his own health. He finds it difficulty expressing himself emotionally, being reserved and stiff in conversation with those who are his direct superiors or who aren’t his close friends.

Eventually Jamie would like to become an officer within Starfleet however he is unsure if he has any skills or talents besides admin work that help him enter officer-ship.

Jamie was born on August 19th 2129 and found himself isolated from his parents who were very much career minded. His sister and he were sent to boarding school and rarely spent any time with their parents. When Jamie had the opportunity to leave his family he couldn’t wait, and when the opportunity to go to university came up he took it. He spent three years at the University of Cardiff studying politics with economics. An able, but not exceptionally gifted student, Jamie took a series of temporary jobs after university, eventually ending up working for a firm in London as junior member of their administration support team. He found this job to be extremely boring so decided that he would enlist with Starfleet, especially with the recent Xindi attack. He wanted to help somehow.

Jamie succeeded in entering Starfleet’s enlisted training program and after completing the nine month course was assigned to administrative duties at Starfleet Operations. He was noticed by Captain Rani Karim who was the adjutant to newly promoted Rear Admiral Samuel Gardner. Karim inquired about the young crewmember that on occasion brought her reports and found him to be a competent officer and clerk. When her own personal assistant went on maternity leave, Karim requested that Harris be assigned to her. During the following two years the two worked extremely well together and eventually she offered Jamie a permanent position as her personal assistant.

By the end of 2154 Captain Karim had already been announced as the next person to command Starfleet’s newest and third NX-class ship, the Challenger. As such she asked Jamie if he would like to join her on Challenger as her yeoman. The chance to travel in space was one that Jamie couldn’t wait to do. He spent the next few weeks completing various training exercises to be prepared for his time on Challenger.

In early 2155 while out on an expedition in the Lake District, England, he was informed of the death of Captain Karim. He completed his training and returned to Challenger to speak with her first officer who was now going to be her replacement for theChallenger’s centre seat. Captain Lloyd Burton asked Jamie if he would remain with the Challenger as he needed him more than ever. Out of respect of Captain Karim’s memory, Jamie agreed and joined Burton as his yeoman instead. Jamie went on to assist Captain Burton in preparing for the launch of their new ship and Jamie became Burton’s trustiest right hand man. In a matter of days the two developed a good work relationship and Jamie was able to anticipate Burton’s needs before the captain requested help. The two of them discovered that they both shared an interest in rugby as well as squash. The two decided to plan to play a weekly game of squash.

On Challenger’s first mission to escort Coalition delegates to Denobula, the ship was attacked by the Orions and a number of the crew were kidnapped. Jamie was assigned as one of Captain Burton’s liaisons to the Coalition delegates, in particular with Earth’s Foreign Secretary Madilyn Campbell and her staff. When Captain Burton was unavailable he would speak on his behalf to keep Secretary Campbell informed of the situation. Secretary Campbell noted to Burton at the end of their mission that Jamie was a fine officer and he would count himself lucky to be his administrative manager. When the ship began its proper mission of exploration, Jamie was responsible in ensuring the captain completed the reports expected of him and would often proofread them for him before Starfleet saw them. The crew came to respect Jamie’s position and at how well he performed his duties. Many saw him as the middle man between the senior officers and junior officers. Jamie became good friends with many of the junior officers, in particular Ensign Niall Stewart who would shorten his name to Jay when he spoke to him. In early April 2155, Captain Burton requested for Harris to join him and Commander Stanton on a routine mission to a trading outpost. Stanton wanted to acquire some engineering parts in a bid to increase the ship’s supplies, but the outpost had strict economic regulations that needed to be followed. Burton believed that Harris had the experience and qualifications to help them with ensure they did everything right. After purchasing their supplies the three men had been caught in the cross-fire between the outpost’s local law enforcement officers and two very disgruntled Rigelian-Jelnas. Harris was shot in the leg by a plasma bullet that had bounced off a cargo container from one of the Rigelians. Burton and Stanton were able to carry Harris back to Shuttlepod One and return him to the ship in time for Doctor Ben-Ami to treat him. Harris was unable to properly bend his leg as a result his mobility was limited. He needed at least three weeks of rehabilitation, which included osmotic eel therapy.

When the ship was assigned the duty of assisting the Andorians in liberating their colony on Docana, Jamie was instrumental in helping Captain Burton coordinate their efforts with the Andorian task force. During this mission Captain Burton was made an acting commodore when Prime Minister Samuels gave him orders to take command of the Starfleet forces in the area, the pressure of this job increased when Chancellor Margerit (the Andorian head of state) placed him in charge of the Andorian fleet too. As a result of this, Jamie took on the role of coordinating and prioritising what reports Commodore Burton needed to view and deal with. Once Docana was freed and back in Andorian control, Jamie assisted the captain in compiling his large report for both leaders of Earth and Andoria.

In mid-2155, the ship visited Delta IV to make official first contact with its natives who were a warp capable species. This was another big diplomatic effort for Captain Burton; again he depended on Jamie with the many reports he had to write out for Starfleet. Jamie joined the captain at every engagement and meeting with the Deltans. He ended up escorting the Deltan delegation from Challenger’s main engineering when the Carreons attacked the ship. Sometime later the Carreons attacked again, this time they launched an all-out assault against the Deltan homeworld too. At this point Jamie had been visiting Delta with Ensigns Stewart and Habiba, unfortunately the ship was forced to retreat from the battle before destroyed. This stranded the three officers, with their first officer Commander Levesque and a few other crewmates on Delta. The Deltans repelled the attack and offered the Challenger crew residency until their ship returned. Not knowing what to do to keep occupied, Harris automatically helped Commander Levesque with anything she needed help with. While on Delta his friendship with Ensign Stewart grew and the two them had decided to explore the Deltan culture further. Both regretted this when they returned back to their accommodation slightly intoxicated. Jamie had not enjoyed the experience as they found the Deltans to be overly sexually active and on a number of occasions they attempted to seduce the two humans. When Commander Levesque decided to proceed with their original mission of developing good relationships with the Deltans, Harris fully supported her orders. When Challenger eventually returned (over two months later) Jamie returned to his duties as the captain’s yeoman and went on to assist in undertaking repairs to the ship. Unfortunately the Deltan military attempted to use the ship in bold last ditched attempt to take out a Carreon armada by detonating its warp core through the use of a computer virus. The Starfleet crew were able to eject the warp core before it destroyed them. Commander Levesque assumed temporary command of the Challenger when Captain Burton was injured during their attempt to stop the Deltan’s plans from happening. Harris would continue to help the senior staff with jobs that may have been mundane, but helped them deal with their current crisis. Fortunately an Andorian ship was nearby to rescue them and helped them with repairs. The ship then headed to find the rest of the crew (who had abandoned the ship when it was severely badly damaged by a Romulan attack) which took some time. Once the crew were retrieved and safely back on board Challenger, the ship was towed by the Andorians back to Earth. Jamie assisted Captain Burton with recovering from his injuries and again helped in being the liaison between Challenger and the Andorian vessel IGS Avenkerev.