Montana Jasmine Lawson (née Price), BA (Hons), is a Starfleet enlisted officer and the Chief Culinary Specialist (or Chef) on board the starship Challenger (NX-03). 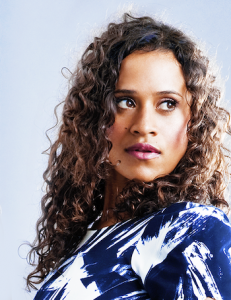 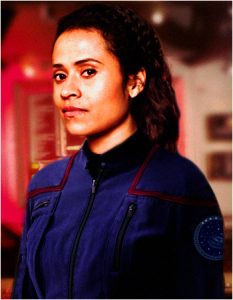 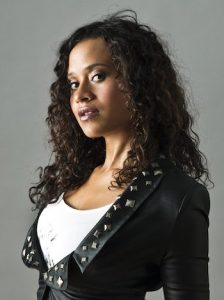 Montana is on the slight petit-size, due her to her occupation she always keeps herself pristine clean. When she is not cooking or preparing food, her hair is normally tied by a few braids and hangs low behind her neck and shoulders. She has a warm smile that makes everyone feel at ease

A caring individual who is extremely creative in just not cooking but problem solving too. She sets high standards for herself and those she leads in the meals she creates.People are naturally drawn to her due to her considerate and compassionate characteristics. She also has a wicked sense of humour that she loves to share too.

Montana is a remarkable chef; she is able to look at a range of ingredients and work out what she can make from them. She enjoys her work, perhaps a bit too much and sometimes can become a bit too obsessed with it.

As she has only recently started her career in Starfleet, as a result she has not quite decided where she sees it going. Nevertheless she does want to retire with Jayden back in her home state.

Montana was born on January 1st, 2120 in Baton Rouge, the state capital city of Louisiana in the United States. Montana had a relatively normal family life as she was growing up. Her mother was a famous a country-western singer and would often take Montana as a child to a number of her concerts. Montana’s father was a politician and when she was born was the Mayor of Baton Rouge. This was a post he held for her entire childhood and he became the longest serving Mayor in the state’s history since World War Three. By the time Montana graduated high school, her father had won the election to become governor.

After attending Baton Rouge Community College, Montana decided to attend Louisiana State University and took a Bachelor of Arts degree (with honours) in culinary arts and professional cookery. During her studies, Montana was a member of the university’s women outdoor track and field team. She won many races and seriously considered giving up her studies to focus on her new found interest in athleticism, however this didn’t materialise because in her third year she met her husband to be: Jayden Lawson. The two were partnered up for a joint project assignment and found they shared a lot in common interest. Once the pair graduated, Jayden proposed to Montana which she accepted.

The two decided to move in with Montana’s parents in the Governor’s mansion for a short time while they sought for employment. At one of her father’s charity events the chef, along with several other kitchen staff, came down with a virus as such both Montana and Jayden stepped in to prepare the meal for her father’s guests. The evening had been a success due to their hard work and one of her father’s big donors (who ran his own chain of hotels in the state) offered them both top positions at his hotel in the capital. They took their new jobs and eventually moved out of the governor’s mansion.

Montana’s career in the private sector went from strength to strength. By the time she had reached the age of twenty-six, she running her own catering and event management firm with Jayden. It was during an event that they were both approached by a business liaison officer to open a contract with them to run functions for the United Earth Space Probe Agency. The deal would be excellent for them and their employees, so they both agreed. It meant moving a majority of their operations to San Francisco, but they both loved the idea of starting a new chapter in the city that was home to Earth’s leading space division.

Several months into their contract, they were offered by Starfleet to consider joining them and overseeing the catering arrangements and public events at Starfleet Training Command. Again, a massive move for the pair, however they agreed to enlist and went on to working at the main campus. Life for the couple was good, they were not bothered about donning on the uniform and both easily passed the initial training. Montana’s cooking became well-known by the cadets while Jayden took on more of the business side of their department.

During the post-celebrations of the launch of Columbia NX-02, Montana was approached by one Commander Rani Karim who was working on the NX Project. Karim had recently been announced as becoming the captain of the next NX-class ship and had offered Rani the opportunity to join her on the next fastest ship to be launched as its chef. Never ever considering her work would take her off Earth, Montana was flattered by the offer. She discussed the offer with Jayden who fully supported his wife in pursuing it. An opportunity to leave Earth and learn about alien cuisines and their cultures was appealing. Montana accepted Karim’s offer and was the first enlisted crew selected for Challenger.

Joining the crew in late in 2154 meant that Montana was able to participate in getting to know the crew and the engineers who were building the new ship. During this time, Montana undertook further training to ensure she was fit and ready for life onboard a starship. She spent three weeks on Jupiter Station as well as other smaller Starfleet ships to get her ‘space legs’. Passing all her of tests, she returned to the ship at the start of 2155 ready to receive and welcome the final crewmembers to join the ship. Sadly this time would not be one of celebration as tragedy would strike when the Challenger’s commanding officer died in shuttle accident. Karim’s loss devastated the crew; as such Montana decided she would remain with the ship while others were quick to depart. Feeling she owed it to the former captain to be with the ship when it was launched, Montana went on to become an almost motherly figure for those crewmembers who were younger and inexperienced.

Under the command of Captain Lloyd Burton, the former first officer, Lawson remained loyal to her ship and crew – she found herself enjoying the assignment but missed Jayden a lot. They would write to each other almost every other day once the ship was launched. Even with their first few missions being dangerous, Lawson did not feel worry any of it. During the middle of 2155 the ship was ordered to make official first contact with the Deltan species on behalf of the Earth Commonwealth and its allies in the Coalition of Planets. Initially the first contact went well with both side exchanging ideas peacefully, but the ship was dragged into an ongoing conflict the Deltans were having with a neighbouring race known as the Carreons. In the open battle between both sides, Challenger was forced to leave its orbit of Delta to avoid being destroyed by the Carreons. Lawson’s team of stewards would find themselves doing more than preparing meals, they were fully involved in keeping morale up as well as helping out with menial tasks that needed to be carried out, especially when Carreons began a campaign of attacking the ship on a regular basis. As their weapons weren’t as advanced compared to Starfleet’s the ship received little damaged until they persisted and repeated their attacks almost daily. In their last battle they engaged a Romulan Bird-of-Prey which they discovered was using a telepresence capturing system to control Carreon vessels. They were able to avoid being captured themselves and disabled the craft; unfortunately the Romulans were not prepared to be captured and destroyed their ship. The shockwave from the exploding ship severely damaged Challenger further.   Captain Burton ordered the crew to abandon ship when it became heavily damaged and unable to sustain the entire crew. Lawson joined the rest of the crew in abandoning ship and would become a key figure when their escape pods landed on an unnamed habitable world. Her skills in finding food that was edible and keeping morale up was vital to their survival. For her efforts she was highly commended by Captain Burton once they were rescued.