Rachele Alexandria Cortez-Ward, BA (Hons), is a Starfleet officer and the Chief Armoury Officer on board the starship Challenger (NX-03). She previously held the role of Second Armoury Officer. 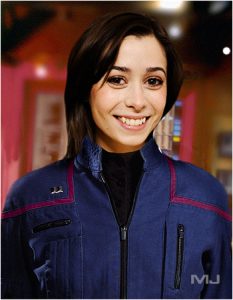 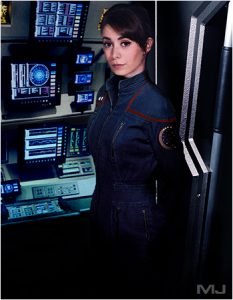 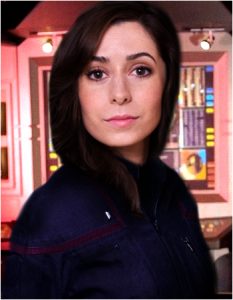 Rachele is an average sized woman with a slight muscular build. She is known to keep her general appearance on duty flawless by keeping her hair either tied up in a bun or in a ponytail.

Rachele has been described by many as a positive force of energy in any room she is in. She is highly committed to her work and loves her job.

Rachele finds it easy to build relationships with others and often draws the best out of people, her favourite saying is “have faith” when a situation seems grim or hopeless. She hasn’t completely dealt with the emotional baggage of Sasha’s loss and she has decided that for the moment she wouldn’t engage in any other relationships.

Rachele is in Starfleet for the long haul. She feels honoured to be on Challenger and only wants to learn more from those around her to progress her career.  She is able to motivate her department in a very positive way and has been told on many occasions she could consider joining the command track in the future.

Rachele was born in San Juan, the capital city of Puerto Rico with her non-identical twin Santiago. Both her parents came from humble backgrounds, her mother a librarian and her father a gardener.  Her upbringing was heavily focussed around her family, including her extended family that was vast with many aunts, uncles and cousins on both sides. Enjoying school, Rachele did very well in all academic areas and made her way on to her high school’s all female boxing team. She did extremely well and became state-champion three consecutive years. In her last fight, she took on a rival school’s unbeaten fighter: Sasha Ward. Rachele won the match, but there was something about Sasha that intrigued Rachele. The two of them became close and eventually their relationship blossomed in being girlfriends.

Sasha and Rachele both went to Boston University and undertook their degrees in International Politics with Economics. Rachele gained a first as did Sasha.  The two of them returned home to Puerto Rico, even though they had fell in love with Boston and New York City. Sasha used her degree to get a job as a journalist, while Rachele considered her options. During this time, she took a job in a law firm being a consultant but felt like she needed to more in her life.  In 2151, Rachele was inspired when she witnessed the live recordings of the launch of the Enterprise NX-01. Sasha saw what impact it had on Rachele as over the next few weeks, all she spoke about was Starfleet. Encouraging her to apply, Sasha gave Rachele her blessing to go ahead with the entrance exams. She did and passed the assessments with ease. Rachele scored high grades as a result, Starfleet offered her the opportunity to combine her first and second years together into one year. Accepting, she soon moved to San Francisco with Sasha visiting her every other weekend.

Her time with Starfleet Training Command went extremely well. Not sure what area to consider, Rachele trained in most areas with engineering, flight and armoury being her most favourable ones. At the end of 2152, Sasha proposed to Rachele and in the following fall the two were married in Puerto Rico in a close family ceremony. During the wedding, her twin brother (Santiago) told her that he was planning to enlist with Starfleet as well.

The following year, in March 2153, tragedy struck Rachele after the Xindi attacked Venezuela. Sasha had been on assignment in the country and was caught in the swath that ripped through the South American country. The loss of Sasha only made Rachele more determined to complete her training and get herself off from Earth and out to the stars.

Rachele was handpicked by Captain Karim to join Challenger at the end of 2154, shortly after she graduated from STC. Karim had been highly impressed with the letters of recommendations and impressive grades that she wanted Rachele straight away. In her last year at STC, Rachele had placed her specialist area in tactical and security, feeling that her interest of boxing and other combative sports would be beneficial in such lines of work. As a result of this, Karim appointed Rachele as the ship’s second armoury officer.

Rachele joined the ship in the last few days of 2154 and automatically was put to work in ensuring the armoury department was ready for the ship’s departure. Meeting her department chief, Commander Lloyd Burton – who would also be the first officer, Rachele began organising the department in the way he wanted it to be ran, however Burton’s reign of the armoury officer would end quickly when tragedy struck Challenger. Her commanding officer died in shuttle accident. Karim’s loss devastated the crew; again, Rachele was determined not to be affected by the loss and wanted to show Karim and the others that she had earnt her place on Challenger.

When Burton was made captain, Rachele took over temporarily as department head as the ship was still going to be launched as planned. Once Burton had found his successor as chief armoury officer, Rachele welcomed on board Lieutenant Commander John Callahan. The two got like a house on fire. Callahan became the mentor that Rachele had always wanted and enjoyed spending many meals with him. His Texan charm and wisdom made him an excellent superior to work for, something she appreciated a lot. He would share a number of tales from previous assignments he had been on, feeling that sharing his experience would only make his department better in dealing with situations. Sadly though, Callahan’s posting on the ship was not a long one as he was forced to make the decision to return to Earth to save his marriage as well as be there for his young family. Saying goodbye to him had been tough, but Cortez remained in touch with him – especially when her new superior was a Vulcan High Command Officer in the form of Sub Commander T’Plau.

Not only did she strike up a close bond with Callahan, but Rachele (being the sociable person she was) formed a number of friendships with other junior members of the crew. On many occasions she would join them for mealtimes or attend as a large group the ship’s weekly film night.

In March 2155, Rachele took over duties on the bridge during the transition from Callahan to T’Plau when the ship helped two colony ships on their way to Archer IV.  Eventually they saved the colonists and escorted them to the Archer system, but prior to their arrival they discovered the new Earth colony was about to come under Romulan siege. They won the battle, but the ship was heavily damaged during the process. Cortez went out of her way to be extra helpful to the sub commander, she didn’t want T’Plau to feel isolated from the crew. During their time together repairing the ship’s weapons and defence systems, Rachele attempted to engage the Vulcan woman in conversation but was not always successful in getting much in response.

When Challenger was assigned the duty of assisting their Andorian allies in liberating their colony on Docana (later the ship would lead the efforts), Cortez would find herself back on the ship’s bridge as the senior most armoury officer. While T’Plau was off the ship with a landing party, Cortez would be by Captain Burton’s side at the tactical station. She was commended by the captain for her high level of hard work, effort and professionalism during the crisis.

During the middle of 2155 the ship was ordered to make official first contact with the Deltan species on behalf of the Earth Commonwealth and its allies in the Coalition of Planets. Initially the first contact went well with both side exchanging ideas peacefully, but the ship was dragged into an ongoing conflict the Deltans were having with a neighbouring race known as the Carreons. In the open battle between both sides, Challenger was forced to leave its orbit of Delta to avoid being destroyed by the Carreons. During a later battle with the Carreons, Cortez was injured when she was knocked off her in the armoury when the inertial dampeners didn’t compensate in time when the ship took an evasive sudden roll. She was later treated for her injuries by Corporal Liam Jenkins, who she had become good friends with. Jenkins, who’s boyfriend was lost on Delta, found it difficult to deal with this. Understanding his pain from losing Sasha, Rachele would spend extra time with him

In their last battle the ship engaged a Romulan Bird-of-Prey which they discovered was using a telepresence capturing system to control Carreon vessels. They were able to avoid being captured themselves and disabled the craft; unfortunately, the Romulans were not prepared to be captured and destroyed their ship. The shockwave from the exploding ship severely damaged Challenger further. Captain Burton ordered the crew to abandon ship when it became heavily damaged and unable to sustain the entire crew. T’Plau stayed with Captain Burton and Commander Stanton on board in a bid to save the ship, Rachele was made the acting chief armoury officer when the crew left via escape pods. When the survivors landed on an unnamed Minshara world, Cortez led the armoury personnel in setting up a base camp for the crew. Cortez had event setup portable sensor drones to scan the local area to help the crew know what was around them. When the drones had detected “flying cities”, Cortez had the job of making sure the entire crew were ready to fight to defend themselves, just in case they were attacked by the planet’s inhabitants. Thankfully this never happened and eventually they would be rescued by Captain Burton after he and the others had dealt with the Carreon-Deltan crisis.

Once the ship had returned to Earth and had been successfully repaired, the news of Sub Commander T’Plau’s promotion and departure from Challenger was quick to get around. Without hesitation, Captain Burton promoted Cortez to be T’Plau’s replacement with the rank of lieutenant junior grade. She would go on to prove his faith in her during their mission to rescue the starships Armstrong and Discovery.