Commander Cooper Declan Walker BSc, MSc, DSc, is a Starfleet officer and the Chief Science Officer and Second Officer on board the starship Challenger (NX-03). Walker had served on two ships and was a professor at Starfleet Training Command prior to him joining Challenger. Before he joined Starfleet he had worked the UESPA as a researcher and later a consultant. 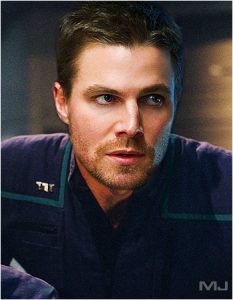 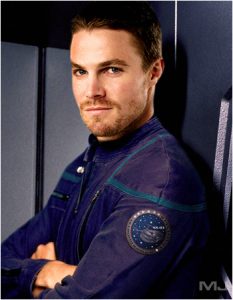 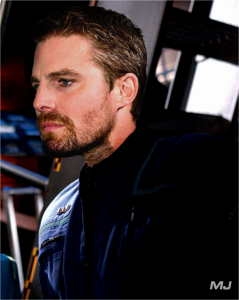 Cooper is handsome and has been described as being easy on the eyes by many. His short sandy blonde hair and dreamy blue eyes makes him particularly attractive. Due to the amount of workout he does, he is quite broad in the shoulders and muscular.

Cooper is known to be confident with his knowledge and expertise in his fields of interest. His calmer, grounded, mature and level-headed traits makes him the perfect leader as he is relatable and able to empower those under his command. Over the years he has become obsessed with his upkeeping his physical strength and stamina.

It has taking time, since his teenage years, for Cooper to remain strong in any social situations.

To return to teaching and undertaking his own research.

Born and raised on Alpha Centauri III, Cooper Walker’s parents where one of the original colonists on the planet when they joined the likes of Zefram Cochrane and others to start their lives on a brand-new world. Coming from a wealthy background, both Leslie and Iain used their fortunes to fund a majority of the work that took place to make Alpha Centauri III a successful independent human colony. By 2121, after successfully establishing their non-profit charity organisation, Walker Inc., Leslie gave birth to Cooper. Raising their son in New Samarkand, Leslie and Iain had the best time of their family life and this only improved with the arrival of Cooper’s youngest brother (by two years): Ryder. Cooper and Ryder were like chalk and cheese in their early childhood; Cooper was the academic while Ryder was sporty one. Cooper loved learning about space and how things worked, while Cooper was always out and about playing a game with his friends.

When Cooper eventually attended high school, his teenage years started to shape the man he would eventually become. He realised that he needed to find the fine balance between his studies (especially his extra ones around science and maths) as well as his social life. Following in his brother’s footsteps he decided to pursue sports as a way in. Due to his height, he found basketball and swimming to be two areas he appeared to be quite good in. By the time he was sixteen he was on the school team for both sports. Ryder, who played for the school’s soccer team, started to become resentful towards his brother accroaching on being the sporty one. For a few years the two brothers did not get on as had a strong, almost unhealthy rivalry between them. This changed when Ryder was successful in qualifying for the school’s swimming team, something that irked Cooper. Their team was part of a tournament and eventually got through to the finals and both Walker boys were required to work together to ensure their team won. Letting go of their jealousy of one another, they went on to win the tournament and resolved their differences amicable. Cooper went on to tutor Ryder with his science studies and the two would spend their free time either working out or out and about playing with their mutual friends.

When he was old enough, Cooper decided he wanted to study mathematics and physics further. His parents, understanding that Alpha Centauri III did not have the means to help him, supported his decision to return to Earth to attend the University of Melbourne, Australia. After four years, Cooper left with a bachelor’s and master’s degrees in astrophysics and mathematics. Ryder had followed in his footsteps and went to Cambridge University, England, to study chemistry. Cooper, wanting to carry on studying the stars, applied to join United Earth Space Probe Agency (UESPA) as a junior researcher. Moving to California in 2143, he worked at one of the UESPA research stations that would analysis data coming in from the Friendship probe project. On the side, Cooper decided he would work on his doctorate part-time through evening classes. Two years later and he finished this work. It was around this time that he started to find his work with the UESPA tiresome and was approached by a recruiting officer to consider joining Starfleet. He decided to leave the UESPA, even though he was a consultant and lead a team of twenty other scientists, researchers and lab technicians, to take on the new challenge that Starfleet offered.

After passing the entrance exam as well as the other assessments with flying colours, he was giving the choice to go through a one year deep intensive course at Starfleet Training Command or go through four more years of study. Feeling that he had spent most of his adult life studying, he was quick to pick the former choice of the intensive training. By the start of 2146, he completed his training and due to his previous position in UESPA, was giving the equivalent rank of full lieutenant.

Cooper loved his time at STC, he got on extremely well with his classmates and it was during this time he was introduced to his wife-to-be, Claudia Levesque, via a mutual friend. Claudia, who worked in Napa, California on a vineyard, brought Cooper further out of his shell and the two of them enjoyed their time together. Before he took on his first starship posting and after only nine months of dating, Cooper asked Claudia to marry him. She immediately said yes and the two were engaged.

Assigned to the Miranda NV-07 in 2146 as its Chief Science Officer under the command Captain Alicia Lockhart, Cooper joined the ship three years after its official launch. The ship’s duties were minor in comparison to other ships, but still Cooper enjoyed the work in being out among the stars and exploring. He joined Captain Lockhart on away missions and learnt a lot from her in regard to leadership. While managing a reasonable size department, Cooper thrived on sharing his knowledge, expertise and experience with those he led. Many of the younger crew looked to him in an almost mentoring style, with some saying he was like the older brother they never had.

When the ship returned to Earth in 2148, he and Claudia eventually got married in quite an elaborate wedding. When he returned to the Miranda, Lockhart made him her second officer and for the next year he enjoyed being able to map a number of star systems within the Inner Core Territories of the United Earth Commonwealth. During 2149, when the ship was receiving a major overhaul of its computer systems, Cooper spent his time with Claudia undertaking the honeymoon they missed out on. At the end of it, Claudia told him she was pregnant. When he heard this news, Cooper felt he could no longer remain on the ship and put in a request to transfer to a position on Earth. Captain Lockhart was sad to lose her science officer but understood his reasons why.

One of Cooper’s former professors at STC, heard of Cooper’s request and quickly asked him to join the science department to teach. Realising he enjoyed being a mentor to younger officers on the Miranda, he accepted the job offer and found he thrived extremely well in the classroom and lecturer halls. After nine months at STC, he took paternity leave when his son, Mack, was born. While off from work he helped his wife (who had just taking over the vineyard she had worked out for most of her life) running their family business. Between them they juggled their responsibilities as new parents, while keeping the vineyard going. With the help of Claudia’s family, who were majority based on Earth, they were able to get through their first year with Mack. Soon after, Cooper returned to teach at STC, eventually he took over as the applied physics department head and was giving the rank of lieutenant commander in 2152.

Throughout his time at STC, he became good friends with his in-laws due to Claudia’s family being so close. His parents and brother did visit him and his new family several times and were pleased to meet Mack too. Keeping up his interest in sports, with his brother-in-law, Cooper entered the London and New York marathons, every year between 2149 to 2155. This was something he loved and would always race to fundraise for his parents’ charity. Another one of his in-laws, Nicole, became a kindred spirit for him during the bigger Levesque family reunion events. Nicole, like he, was a Starfleet officer and a scientist too. The two of them on a number of occasions would share research papers they found interested or would talk for ages about the work they undertook.

At the height of the war with the Romulans, Cooper was re-assigned to the Daedalus-class ship the Armstrong. He would be assigned as its chief science officer and second officer, a position he hadn’t worked on for almost six years now. Starfleet needed strong officers back in the field to deal with the Romulan threat and he was one that Starfleet felt needed to be elsewhere. Captain Saina Charan and he hit it off as she took was a scientist first. Sadly though, his time on the Armstrong would be short lived when the ship was sent to help defend the colony on Deneva. During mid-flight they were attacked by the Romulans and the ship fell back to inform Starfleet Command what happened. Starfleet lost contact with the ship after their last transmission.

Captain Burton and the crew of the starship Challenger ultimately found the wreckage of the Armstrong and among the debris were a handful of escape pods. Cooper survived with a number of others, but he was soon told by Captain Burton he was the only surviving member of the ship’s senior staff. Due to his own staff shortages on Challenger, Burton offered Walker the opportunity to succeed his sister-in-law, Commander Nicole Levesque as his chief science officer. Nicole had recently left the ship to take up a new position as deputy director of Starfleet Science.

Agreeing to Captain Burton’s offer, Cooper went on to serve Challenger well as its new science officer and second officer. However the loss of life from the crew of the Armstrong would go to haunt him for some time. He found himself writing daily to Claudia, this was something he needed to do just in case anything happened to him while he was away from home. Walker’s first mission on the Challenger was to support his new captain in planning for an attack against the Romulan Star Empire. Though the plan did not go ahead, due to the Tholians launching a surprise attack, Walker did use the time to start to get know the rest of the crew. He quickly became good friends with Commander Rodham and the two would later on become informal mentors to the more younger inexperienced officers who stepped up to take over from those recently lost in senior staff positions.

When Burton launched a daring mission to convince the Klingons and Kriosians to see that the Romulans had been manipulating them, Walker (with Rodham) provide counsel to their captain about his plan. Though the mission was not a complete success, Walker did provide important assistance during this assignment.