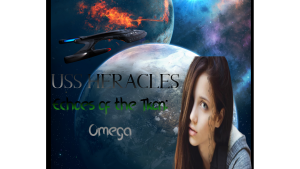 Rain poured down on a group of people that stood together in a graveyard. Everyone held black umbrellas over their heads, but one person. Vausees had her eyes closed with her head down, her face was soaked in rain and tears as she listened to the pastor’s sermon about Trance and her deeds, about her dedication to Starfleet. Her brunette hair hung twisted together as she opened her eyes and looked at the coffin with the light blue United Federation of Planets flag draped over it.

Trever stood next to her but he didn’t know if he should try and comfort his sister’s love, his best friend. He could feel the grief flowing from her, that nearly matched his own. His twin had been taken from him and he felt responsible for not protecting her, but he also knew the risks of wearing the uniform.

As the pastor finished the sermon two Fleet Captains approached the coffin. It was then that Vausees moved forward. One of the Captain’s looked at her and her soaked form and nodded realizing what she was doing. She joined the remaining Captain and together they took the edges of the flag as the coffin was lowered into its final resting place. Together Vausees and the Fleet Captain folded the flag. When it was finished the Captain handed the flag to Vausees. She took the flag and held it to her chest as she turned to look at Trever. She smartly walked over to him.

Leaning over she whispered, “I can never tell you how proud of the both of you I am. Or how much you both mean to me,” her voice was low in tone as she tried her best to hold in the sound of her grief. She then released the flag from her chest and offered it to Trever. He looked at it, placed his hand on top of it, and looked into her light blue eyes. “Keep it,” he told her as he slowly slid his hand off the flag, “ and remember her as I always will.”

Vausees sat in the living quarters on the Heracles; she could not bear to be on solid ground after the funeral. Several times, Zazzuit, Cody, and Trever tried to get her to leave the ship, but to no avail. She would constantly either ignore them or make up an excuse of some kind. Even Vax would attempt from time to time to show her how this was not good for either of them, and she would plead her case to her Symbiont stating she was not ready and that she still needed time to mourn.

A soft chime came from her closed door and Vausees looked up from her book. She sighed when it went off for a second time. After she stood up and moved over to the door she tapped the bland white button on the console next to the door, “Look I am not..” she stopped mid-sentence when the door slid open to reveal her father, Valul standing there.

“Father?” she said in a confused tone.

He looked at her and shook his head, “Is this the young woman that petitioned the Symbiont Council to grant her the right to join Starfleet?” he stated to her.

She felt the sting from his words and was about to plead her case when he cut her off once more, “I do not care about your grief,” he told her, “We all have grief in some form or fashion,” he continued, “but you daughter are a Starfleet Captain and from what I hear, one hell of a Captain at that.”

They looked at each other as they stood in her doorway, “Are you going to let me in or just have me stand here in your doorway?”

Vausees took a step back and Valul walked into her quarters, the door hissed shut behind him. He took a seat next to a table that was covered in items from PADD’s to holopad, even the flag that Trever had told her to keep was half-buried under all of it, though protected behind a shadow-box.

Valul looked around her quarters and then back at her. She could see the disapproval in his eyes. As he was about to speak she raised her hand to stop him.

“I do not need a lecture about how I am living,” she said to her father.

He shook his head, “ That is just it, Vausees, you are not living but rather existing,” his voice held a concerning tone to it, “when was the last time that you left this room, or for that matter, the ship?”

She shook her head this time and was about to speak when Valul raised his own hand to stop her.

“Look Vausees, I didn’t come here to fight with a grieving woman,” he stated as he looked into her light blue eyes, “I came here to let you know that the Symbiont Council is considering terminating your career in the interest of the Vax Symbiont.”

This caught Vausees off guard and she snapped her head up and looked at her father, coldness had replaced the grief that had been in her eyes.

“You mean, that they mean to kill me because I am grieving for a woman that I loved, and have in the process neglected my duties to the Symbiont Council,” she stated to her father, her tone holding a wave of anger at the idea. She then stood up as she had been sitting while her father spoke to her, “You can go back to the Symbiont Council and tell them good luck because while I have not broken any Trill or Symbiont laws, to my knowledge, I am a Starfleet Officer and as such have sworn my allegiance to the Federation,” she stated as she looked her father dead in the eyes.

Valul could see the anger mixed with surprise on his daughter’s face and in her eyes.

Vausees sighs and points to her door, “Go,” she ordered.

Valul nods his head and heads for the door. He stops when it opens and looks over his shoulder, “Get out yourself Vausees.”