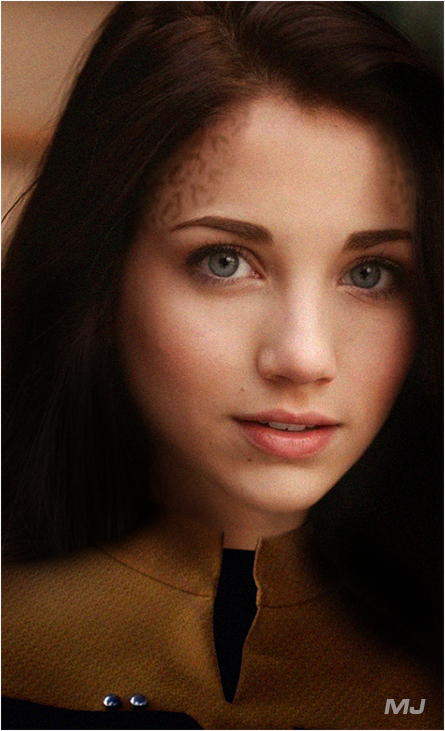 Born on Trill in 2364 to Valul Ves, her father, and Vura Ves, her mother. It was mid-summer Solsust when she was born, and the night was crisp that day as the sun had just set. Vausees had not let out a cry when the doctors had removed her from her mother’s womb. This action or rather lack of action confused the medical team that had birthed her. Having concerns about her mental state, the Doctor removed her from her parents and ran several tests to find out why she had not uttered a sound when she was born. After several days of constant tests, they could not find an answer to this perplexing question. Finding no answers, they returned her to her parents and advised them to keep an eye on her for a few months.

After a year, they dismissed the notions that there was something the matter with their child and started her training. Simple tasks at first, but they gradually become more difficult as she grew more and more accustomed to the tasks; it helped that Vausees was rather quick at not only picking up the tasks but then figuring out ways to do the same task but in another manner.

One day after her 15th birthday, Valul, her father, found Vausees scaling a cliff face of a nearby mountain range, and as he stood there watching her, he noted how graceful and precise her movements were. From the placements of her hands and feet to the upwards movement that her body made as she reached up to a handhold. He even noted that at times he knew that there were no hand or footholds near where she was splayed against the cliff face. He would watch as she would propel herself nearly five feet up the face of the cliff and catch hold of a crack or protruding rock with near ease.

On her 18th birthday, Vausees confided in her mother how she would petition the Symbiont council to allow her to compete for the right to join with a Symbiont. Her mother advised that she should think long and hard on this choice because if she was not ready and failed the joining, it could mean her life and the Symbiont life. She knew the risks, and after a few weeks and weighing out the risks and rewards of joining, she informs her mother of her decision and petitions the Symbiont council and beings her training, both mentally and physically, like nothing she had ever trained before. From academic training on how to survive on a foreign planet to identify the terrain and its many facets. Her body became a weapon of its own, much to her father and mother’s tutelage.

For three years, she trained and studied, and on her 21st birthday, she went before the council and presented her knowledge and skills to them. Every member of the council unanimously agreed that she would be a perfect fit for a Symbiont. They asked her if she knew which one she wanted, and she nodded and recited the name of Vax, a Symbiont know for its great knowledge of survivability and Tactics. As well as the vast knowledge of all manners of weapons. From the Starfleet models of phasers and pulse rifles to the Klingons Batleth.The Vax Symbiont also had a compassionate side to itself that would enhance Vausees already compassionate side so that she would know just how and when to take down a person or how to be tender and care for a sick or dying person.

While laying on the table draped with customary shroud, Vausees could feel the Symbiont guardians and council members staring at her, judging if she could, in fact, handle the joining. When the Vax Symbiont was slide into the pouch in Vausees abdomen, and the connection between the two was made, she felt a joyfulness that she had not felt in a very long time. Her mind was flooded with all of the Trill before her that had shared this Symbiont, and a single tear seeped out of her left eye.

Three years later, upon returning home from an adventure of knowledge and training, she stood before her parents and the Symbiont Council and informed them of her wishes to join the Starfleet Federation. There was a little disagreement from a couple of the Council members, but in the end, they agreed that it would be best for her to follow the wishes of her Symbiont and that it was indeed of a great benefit for both of them. So with the blessings of her parents and the Symbiont Council, Vausees Vax set off the Earth and Star Fleet Academy in San Fransico.

While in the Academy, Vausees found herself in amazement at the Cadets’ training while under the tutelage of several professors. She excelled in the survival training in her fourth year at that Academy and was even permitted to study abroad on a recognizance ship as it kept a watch on several species that seemed to be at each other’s throats. This excited her but did not fill a void that she had until the ship docked at DS9. While onboard the station, she found her calling. She witnessed the wildness of the station and the tranquility at the same time.

Once, while on DS9, several species thought it would be quite fun to stir up some trouble. Her instincts told her to intervene, but the group was surrounded and apprehended before she could move. This feeling that Vausees had prompted her to report to the Captain of the ship that she was on and request training as a Security Officer. The Captain looked at her and nodded to her request. He bestowed on her the Rank of Acting Ensign and had her report to the Chief Security at once for duty. While onboard the ship, she kept an eye on the others and most on the Chief and how she ran her members.

One night, while on duty on the Bridge, Vausees happened to be called to the Mess Hall for reports of a fight breaking out. Reporting to the Mess Hall, she was assaulted by cheers and celebrations, and not violence. Standing there, she broke down in tears as she had all but forgotten her own birthday, having been so wrapped up in her studies and her temporary duties about the ship. Several of the ship’s crew came over and placed a hand on her shoulder, and congratulated her on her 28th birthday, even though in reality, her Symbiont was nearly 286 years old.

Six months later, Vausees was aboard a vessel heading back to Earth as the recon ship remained out in deep space. When she returned to Earth, she was called into the Commandants Office and given privacy for an urgent call. While she was listening to the man talking to her, her mind was, in fact, shut off to the news that her parents had been killed in a transport accident. Vausees’ Symbiont tried to show her that there was another way to channel her anger and guilt of being the last of the Ves to be alive. She was given an Administrative LOA and sent back to Trill to attend a formal funeral for her parents, which was a plaque with their names on it since there were no bodies recovered.

Vausees graduated top of her close and was given the choice of any assignment that she wished. She requested DS9 and served there as one of the members of the Stations Security Officers, as an Ensign. She received a distinction for her many performances to include the repulsion of a secret Cardassian rouge element that had planned on the destruction of DS9. This would have earned her a promotion to Lieutenant, but she declined it with a reason of feeling that she had not earned it yet, based on her assumption that any officer would have done what she had done if given the same circumstances.

For 7 years, she served on DS9 and had passed up three promotions. It wasn’t until her orders were changed that she was given a final promotion to Lieutenant, with the orders to take the promotion and the transfer. She graciously accepted both and was transferred from DS9 to the Mithrar Sector in the Delta Quadrant and aboard the Mithrar Anchorage.

Two months later she receives orders to return to Starfleet HQ for further instructions on her next assignment. She spends the next three weeks about the USS Paladin and helps out where she can. Upon arriving on earth she is greeted by one of the secretaries from the Admiralty and told to return home and that she would be contacted in a few days. For the next two months she waits for orders, all the while she periodically calls Starfleet HQ for updates.