When Lieutenant Dathan's old allies rear their head, she is at last forced to decide where her life and loyalties lie.

– ‘There is Another Sky,’ Emily Dickinson

Lieutenant Dathan Tahla is not all she seems. To her service record, she is a desk-bound analyst with a sudden ambitious shift to her career in the past few years. To her fellows on the USS Endeavour, she is a mysterious but steadfast member of the crew, her official records presumed to hide a complex history in Starfleet Intelligence. To her true masters, she is Agent Dathan of the ISS Endeavour, a Terran Imperial ship trapped in this reality, desperate to return and dispatching Dathan to replace her doppelganger and feed information back to the warship.

To Dathan, the USS Endeavour was first nothing but a mission, the crew nothing but naive and foolish idealists. But too much time has passed. First she found them strong allies who gave her a trust she never knew. Then they risked their lives for her, Lieutenant Rhade and his Hazard Team beating the odds to rescue her from the Romulan Imperial prison world of Tagrador. Then they had the audacity to become her friends.

When agents of the ISS Endeavour planted a bomb on the last USS Endeavour in an attack Starfleet has blamed on the Romulan Rebirth Movement, Dathan was warned so she could flee. Instead she sabotaged the attack, saving the lives of almost everyone aboard. She has told herself the attack was engineered by rogue elements of the Imperial unit not loyal to the mission commander; that without the USS Endeavour, she could not feed information back to her superiors. But what is the truth? Where, when push comes to shove, will her loyalties truly lie?

Meanwhile, Endeavour has helped the enigmatic archaeologist Doctor T’Sann on his mission to find the Koderex, one of the ships from the original Romulan exodus lost before it could reach Romulus. More than a historical artifact, the Koderex was an archival ship with untold knowledge of early Romulan civilisation. While the ship was found by T’Sann, aided by Lieutenant Kharth and Ensign Beckett, only its databases were recovered. But the Koderex remains politically volatile – who has a right to possess its archives, or share its knowledge? – and while T’Sann retains access as he works aboard Endeavour, some expect Starfleet would prefer the whole project to go away and never see the light of day… 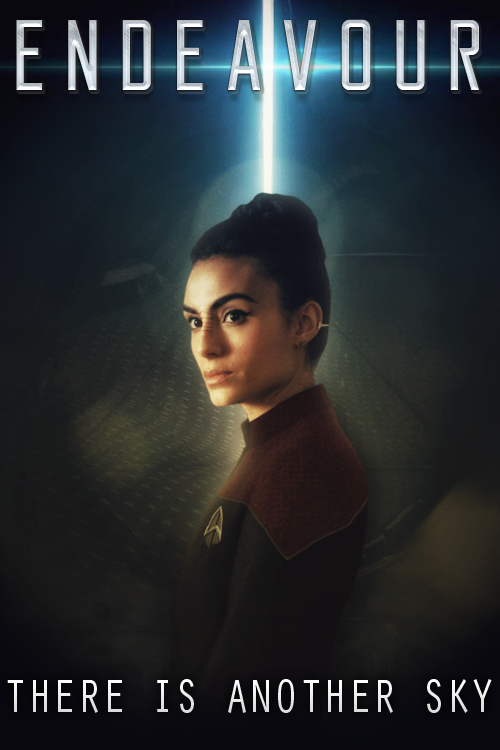 There is Another Sky - 8

Being under the cold-eyed scrutiny of Matt Rourke was an experience Dathan thought she’d left behind her, but as she stood before his ready room desk, she could feel the caution and suspicion radiate from him. ‘I appreciate the circumstances are complex, Lieutenant. But you requisitioned a [...]

There is Another Sky -7

When Commander Graelin came into the archaeology lab, checked they were alone, and told Beckett, ‘We need to talk,’ he was sure he was in trouble. Studying research of historic Vulcan archival protocols was hardly incriminating behaviour, but Beckett still switched his screen off as he [...]

There is Another Sky - 6

By the time she made it back to the Uther Pendragon, she’d been gone for six hours. The journey back and forth was not a short one. There’d been the body to deal with, as well as Kowalski’s gear, once she’d recovered her faculties. She’d had to consider her story and its necessary [...]

There is Another Sky - 5

Theta Curry IV was a dull rock of a world. They set down on sea of grey scree deep in a valley that had once sheltered a refugee settlement from the elements. High winds buffeted the Uther Pendragon on the descent, promising vicious chill if one climbed the cliffs, and even Dathan Tahla had to [...]