Chasing the Wild Hunt has led Endeavour to the Azure Nebula - but they soon become trapped in a stellar phenomenon that traps scattered crewmembers not only across the ship, but across different versions of the ship and their lives, past and present.

Two roads diverged in a wood, and I –
I took the one less travelled by,
And that has made all the difference.

– ‘The Road Not Taken,’ Robert Frost

The USS Endeavour has been charged to find and destroy the Wild Hunt pirate gang, responsible for plunging the Midas Sector into chaos and fear, and a vicious attack on Endeavour itself that left several crew killed and the beloved commanding officer, Captain Leonidas MacCallister incapacitated. In temporary command, Commander Matt Rourke has successfully crossed swords with the Wild Hunt and his officers tracked the Wild Hunt through their allies in the Klingon House of Mo’Kai, giving them a lead on the pirates’ stronghold, a location deep in the Azure Nebula.

But life aboard Endeavour has been tense. Rourke is haunted by the claim by a Wild Hunt leader to be Erik Halvard, once an officer who reportedly died under Rourke’s command in an incident that took him from front-line duties for years, and he has been driven to reinvestigate old traumas to try and uncover the truth. Others are not without their troubles; Rourke’s relationship with XO Commander Valance has been fraught at best, while Lieutenant Thawn wrestles with her grief over Endeavour’s losses, and Lieutenant Kharth has struggled to reconnect with Science Chief Commander Airex, whom she last knew before he was ever Joined to his symbiont. 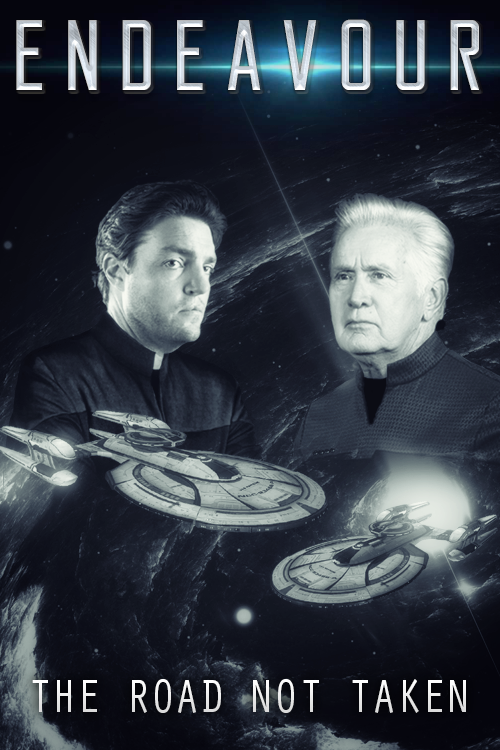 Better Than the Alternative

‘No booze,’ said Cortez as she slid into the chair across from Kharth, their table near the windows of the lounge. ‘I’m too wiped. And coffee’s gonna make me too wired.’ ‘Surprised you agreed to a break at all,’ said Kharth wryly. ‘Diagnostic outputs were starting to go fuzzy in [...]

Part of Something Greater

Kharth tried to not jump when Lieutenant Davir Hargan stopped next to her post at tactical. The waiting wasn’t taking long, but it was still waiting, something she preferred to fill by making sure she knew exactly what would go down, when. ‘So things are a little different on your Endeavour,’ [...]

The Edge of Our Universe

‘You know, I’m glad there are people on your Endeavour none of us recognise,’ Commander Robert Templeton of the alternative Endeavour said across the viewscreen. ‘I was starting to feel like the odd one out that nobody knew me.’ ‘Not a clue who you are,’ Cortez said cheerfully. ‘I [...]

Seventeen Hundred Versions of Us

‘If we can detect them,’ said MacCallister, leaning back on the command chair, ‘we can communicate with them.’ Commander Templeton folded his arms. ‘And then what, sir? Say “Hey?”’ ‘We can pool knowledge. Maybe resources,’ said MacCallister. ‘I know this crew can think their [...]