Rebecca Rose Talon neé Sandoval(b. September 14, 2337) is a highly experienced Starfleet officer and starship commander. Talon is a veteran of the Federation-Tzenkathy War, Wolf 359, and the Dominion War.  She is known for her accomplishments as the captain of the USS Denver and championing and eventual command and development of the experimental carrier USS Erebus.

Born Rebecca Sandoval in Santa Fe, New Mexico on September 14, 2337. Rebecca grew up on her family ranch. The 1,200-acre ranch was granted to her ancestor in the 16th Century by the King of Spain making her part of one of the oldest families in the area.

Her father was an artist, and her mother was in Starfleet. The duality of life between life on Earth, and onboard a Starship meant she never formed any long-lasting friendships, and she instead had her books.

When she was ten her mother’s ship was destroyed in the Federation-Cardassian War. Her father, grief-stricken, became detached, and her grandmother helped raise her.

Incredibly bright, she graduated from high school at sixteen, and enrolled at the Colorado School of Mines and dual majored in Physics, and Mechanical Engineering.

Graduating from the Colorado School of Mines at the age of 18 she joined Starfleet and enrolled in the doctoral program at Starfleet Academy where she earned PhDs in Warp Theory, and Mechanical Engineering. She also picked up a minor in Alien Languages.

While at the Academy she met her first real friends. Nicholas Ryder, and Nancy Peterson. The three were inseparable, and were nicknamed the “Three Amigos”.

She also met a man named Michael Sanders her second year and the two started dating. During the spring of her Sophomore year she became pregnant, and later that summer he proposed to her. They decided they would get married after she had the baby.

In November of that year, just two months before the child was due to be born they were on a shuttle training mission with Nova Squadron. An ion storm near the asteroid belt forced an emergency landing on Jupiter’s moon Europa.

Michael was killed in the crash, and Rebecca was badly injured. She was rescued quickly, but it was too late for the unborn child. Rebecca named the little girl in honor of Michael’s mother Faith.

Stricken with grief, Rebecca nearly failed all her classes. She didn’t even care. Nick and Nancy pushed her enough to get through her junior year to pass her classes, but the grades were anything but stellar. After a Summer in Santa Fe, she returned to the Academy and graduated near the bottom of her class.

Upon graduation from the Academy Rebecca was assigned to the USS Antietam as an engineering officer.  The aging Constellation-class ship required a lot of maintenance and Rebecca put in long hours often going above and beyond.  She was rewarded in 2361 with a promotion to Assistant Chief Engineer and junior lieutenant.

In 2363 the Antietam took part in Operation Ark Royal. With Okinawa in the lead, they attacked a Tzenkathy held planet constructing munitions for the war. Later that year at the Battle of Galundon Prime Rebecca was severely injured when an ODN line burst where she was working. She spent three months in sickbay recovering. 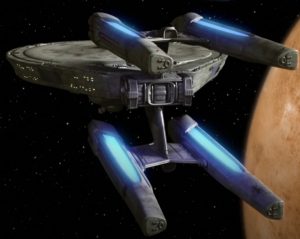 Healed from her wounds she had been replaced as assistant chief engineer.  To further her career she chose to leave the Antietam for the USS Saratoga as that ship’s assistant chief engineer.  It was aboard the Saratoga that she took the command test, and was promoted to full lieutenant. Her time started to be split in engineering and command of the night watch on the bridge.

In 2366 she took the Chief of Operations position and was promoted to Lieutenant Commander. The Saratoga is involved in a plot by the Romulans to drive a wedge between the Federation and the Klingon Empire. 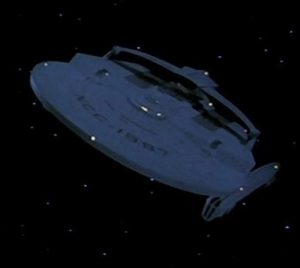 In 2367 Rebecca transferred yet again to the USS George Washington, this time as the ship’s executive officer.  While onboard she met a young tactical officer, Milo Talon.  The two hit it off and soon a romance started to flourish in secret. Rebecca found out she was pregnant but kept it a secret at first from Milo.

Unfortunately, this posting was short-lived, as the ship was dispatched to stop the Borg at Wolf 359. During the battle, Captain Ryder was killed and Rebecca took command of the ship just long enough to allow the crew to escape before beaming out to a nearby shuttle. 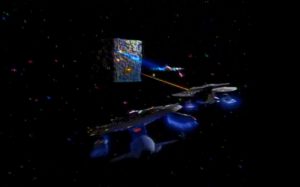 Following the battle, Rebecca was haunted by the sight of so much loss and tragedy.  Milo had already resigned from Starfleet and had returned to his home planet of Terra Alpha where he had a ranch there. In an attempt to salvage her career she took a position at the Antares Fleet Yards where she became a construction supervisor of the Sabre-class and did some consulting on the Defiant where an old friend from the Saratoga was working.  In recognition of her outstanding work, she was promoted to full Commander.

On May 24, 2368, Rebecca gave birth to twin daughters Aimee and Olivia. At the time Rebecca didn’t know how Milo would react so she give the girls her name and not Milo’s  Eventually, she and Milo rekindled their relationship. He moved in with Rebecca and his two daughters on Antares.

Rebecca tried to make Starfleet work, but the uniform was a constant reminder of the friends and loved ones lost.  Rebecca also didn’t like actual starship construction. She wanted to be out amongst the stars.  To seek out new life, something that she couldn’t do at a shipyard.

Frustrated she resigned her commission in 2370 and went to live on Terra Alpha with Milo and the twins.  On June 28, 2370, she married Milo on his ranch. Nick Ryder and Nancy Peterson were there to witness the ceremony.

Rebecca spent the next two years raising her daughters Aimee and Livvy on Milo’s Rocking T ranch on Terra Alpha.

She was happy there and found great meaning in the physical labor that was ranch life. She had always had a few horses growing up in Santa Fe, so she already knew how to ride, but ranch riding was completely different.

Isolated from the events of the galaxy she had only a passing familiarity of events that were going on.  With the destruction of the USS Odyssey, the Federation began to prepare for war with the Dominion including putting the ships designed to counter the Borg into full production.

As relations with the Klingons deteriorated and the threat of war on two fronts and desperate for experienced officers Rebecca was recalled back to active duty in 2372. 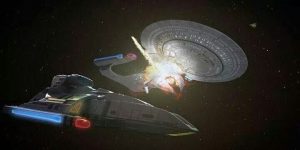 Rebecca reported for duty aboard the USS Denver as the first officer two weeks after Chancellor Gowron withdrew from the Khitomer Accords, and was at the Archanis Sector was overran by Klingon forces.

In early 2373 the Denver with the newly formed Seventh Fleet entered Klingon-held territory and re-took several systems along the old Federation-Klingon border.  At the Battle of Lem’poc Prime Rebecca lead a ground force in taking back the Federation colony and forcing the Klingons off the planet. This was one of the few successful ground combat operations of the war.

In 2374 the Denver was with the Seventh Fleet at Starbase 75 when war officially broke out with the Dominion.  They took part in several border skirmishes for the first few months of the war taking light losses but always falling back.  The early part of the war was particularly disastrous for Starfleet, as nearly every encounter resulted in losses.

Dispatched to the Tyra System to stop the advance of the Dominion the Seventh Fleet takes a beating.  The Denver is one of fourteen ships to escape the ca carnage but not without losing it’s captain and many officers.  When they limp back to Starbase 75 Rebecca Talon is promoted to captain and given command of the ship. 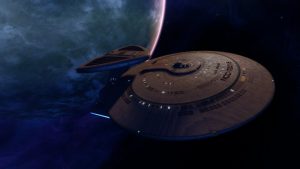 At the Second Battle of Chintoka the Denver was nearly destroyed.  Let adrift it was salvaged and towed back to Utopia Planitia Fleet yards to be rebuilt. The loss  of her ship was the end of the war for Captain Talon. For the last six months she had been consulting on a new  fleet carrier type starship for the ADSB and she transferred to the San Francisco Fleet Yards to work on the Erebus-class prototype. 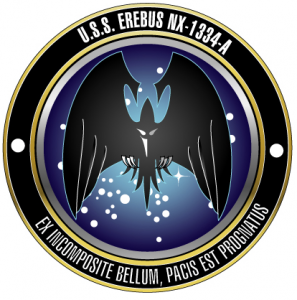 With the war winding down and Starfleet wanting to return to it’s non-military roots the Erebus-class was cancelled, but with the help of Commodore Montgomery Scott she was able to convince Command to allow the Erebus to be finished.  This unfortunately did not make her any friends with the admiralty. In 2380 with the compleated USS Erebus finally completed Captain Rebecca Talon was given command of the ship and sent off to the Pythus Sector and Starbase 155 under the command of Admiral T’ver to be forgotten about.

But, instead of being forgotten Rebecca and her new ship excelled in the various conflicts of this lawless region. In 2383 she was promoted to Commodore and put in command of Task Force 287.  She retained command of the Erebus.

Using the Erebus as her flagship she was promoted to Rear-Admiral and given complete control of the 19th Fleet.  At this point, she was more of a paper pusher than anything and did not enjoy her role with the fleet.  The Pythus Sector was isolated and saw little action in the greater scheme of the galaxy with them dealing primaraly with rogue Cardassian, and Breen elements, and various criminal organizations like the Orion Syndicate.

In 2395 Rebecca reliquished command of the Erebus and took up a job at Starfleet Command with a promotion to Vice-admiral to head of the ADSB for the San Francisco Fleet Yards.  Milo moved off of Terra Alpha and the settled into her now vacant family home on Santa Fe. 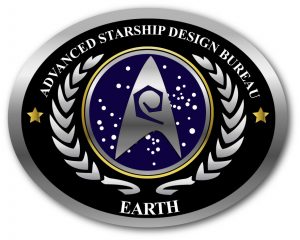 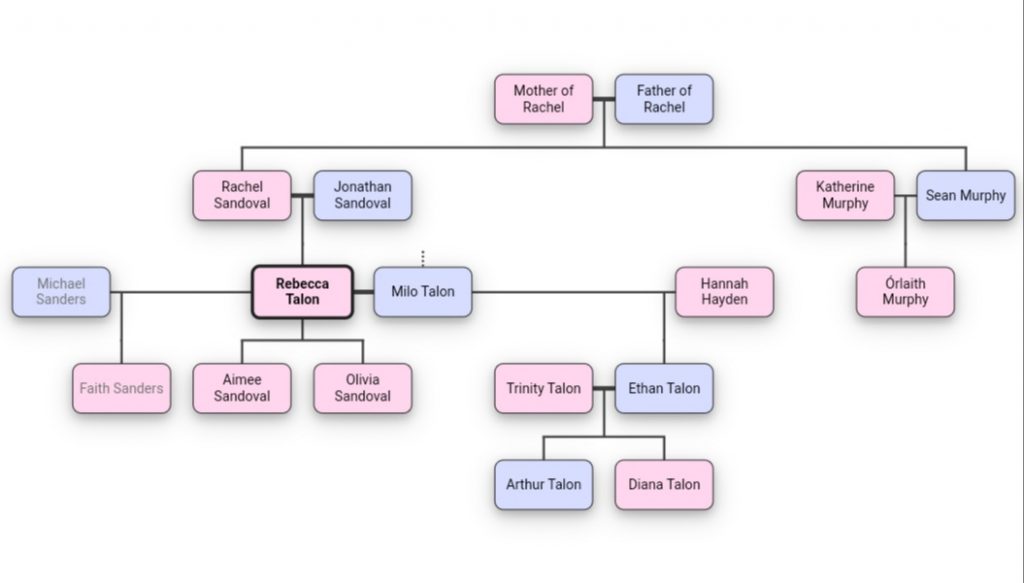