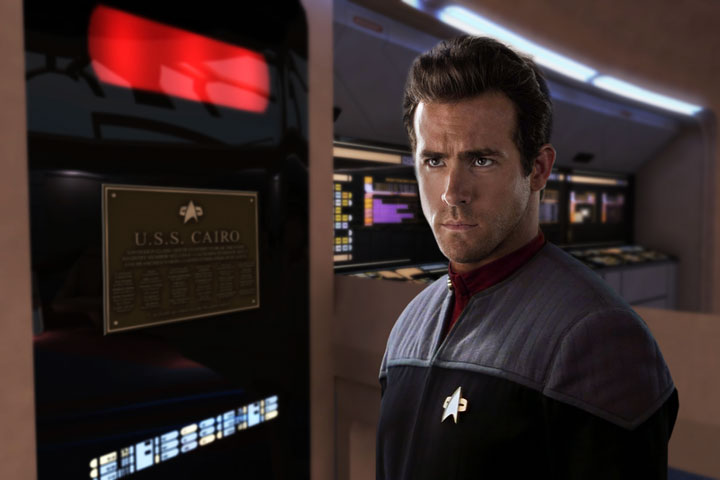 Dedicating his life to engineering has made Roman ‘one of the best engineers in the fleet’ He is a quick thinker and always on the ball. Starship design and holographic programming is his specialties.

One of Romans weaknesses is his fear of looking foolish in front of other. He tries so hard to stay composed and keep the worker/supervisor professionalism that he forces people away. All the young officers want to spend as much time with him, to build up their knowledge and skill, Roman just wont let them.

Roman has always wanted to be an engineer. He thought he would have been happy as a chief somewhere, even an operations officer which would give him bridge duties.. Anywhere really, with new challenges everyday, something to keep him focused and refreshed. He even considered trying for a command of his own someday. After a brief stint at Utopia Planitia, he found his true calling in starship design & construction. He now wants to someday return there and head up his own construction project, overseeing a starship class design and construction from start to finish.

Roman enjoys re-enacting ‘classic’ holonovels and designing his own, either training programs or little adventures. He also enjoys creating mock starship designs and testing them in the holodeck.

Roman was born into a Starfleet family with all but the exception of his father serving in the navy. He was exposed to exploration and military life at a very young age. His father spent most of Roman’s childhood away on missions that he didn’t inform or discuss with his family. He just came and went as ordered. If and when his father did return he spent most of his time with Roman’s younger brother Lucas as he wasn’t long born.

Roman’s performance at school was exemplarily, his teachers had spent a lot of extra time on him as he seemed to grasp physics and diagrams well beyond what he should have been capable of at his age. At his last parents evening on his final year, his teacher had handed his mother an application PADD for starfleet academy and suggested that this was the best place for Roman.

Roman started the Academy the following year and quickly worked his way to the top of his engineering and theory classes. His instructors had expressed their interest in his abilities in engineering and the theories of physics but had a concern that he wasn’t hitting the required grades in tactical, command and interspecies relations. An older instructor at the academy had apparently seen himself in Roman and arranged to spend some extra time with him on his lacking abilities. Roman successful passed all the required modules with an honours in Advanced engineering. He didn’t manage to get top of his class for tactics but he wasn’t at the bottom either. He had developed a taste for command when he was getting his extra tutoring but his skills engineering were greater.

Upon graduation from the Academy, the same instructor that had spent time mentoring him approached him and offered him a position under his command. Out of appreciation, a young Roman gladly accepted unknown to him that his instructor had just accepted a position as head of starfleet intelligence for Terran system. Roman then spent the next 2 years working out of the daystorm institute designing, assembling and implementing new technologies that would benefit starfleet intelligence.

Upon a successful 2 years with SI, he decided to transfer to a starship, to get him away from Earth and out exploring the galaxy. He was assigned to the Galaxy class USS Adams as a damage control specialist. It was onboard the Adams that he quickly earned the reputation of a quick thinker and hands on worker. Captain Sanders was a close friend of Captain Lovak of the USS Cortina and recommended him for the position of Assistant Chief Engineer. Roman had been promoted through the ranks’ fairly quickly and was rapidly earning himself a reputation that would perhaps supersede his famous fathers.

In 2373 Roman was transferred to Utopia Planitia to work on several starship design projects as an advisor. He was responsible for going through in fine detail the plans and construction techniques for any new starship design before it was sent to Satrfleet command for approval. This was Romans ideal posting, ASDB was where he wanted to be until the Dominion War came and took it all away from him. All available officers were assigned to the front lines, Roman as Chief Engineer on the USS Drake.

The Drake has taken heavy casualties during its many battles throughout the war. It was in one instance during the battle for Betazed that most of the bridge crew was badly injured or killed. His CO had ordered him to take the ops station. This gave Roman his first real taste of bridge duty and he liked it. After the battle, The Drake wasn’t salvageable and the crew were transferred to the USS Delaware.

The Delawares first mission after the war was to venture into the Delta Quadrant, here they encountered a vicious reptilian species who had eventually overrun the Delaware and killed most of here crew. Roman and a few others had managed to make it to escape pods before the ship was destroyed. They were rescued a few days later by the USS Valhalla. Roman stayed onboard the Valhalla as Chief Engineer, grateful for their assistance in saving his life. During his time on the Valhalla, he kept felling lost and unhappy. He soon realised that it was bridge duty and the prospect of command that he missed. He requested a transfer from Starfleet, the first that he had done in his career and they obliged.

Roman soon worked his way through the ranks, eventually gaining the prestigious posting on the new Excalibur Class USS Lexington where he served with then Commodore Kara Thrace. When Kara was promoted to Rear Admiral and became Task Force Commanding Officer of Task Force 93, she transfered her flag to Deep Space Six and promoted Roman to Captain, leaving him in command of the Lexington on detached duty.

Within months, Starfleet had requested that the Lexington be re-assigned and Roman was to take command of a small Task Group being attached to Deep Space Six. Part of the Task Group was the USS Cairo where Roman was instated as her Commanding Officer. Serving with distinction over the next year, Roman went on to build resources and supplys within Romulan space following the Hobus event.

Task Force 93’s then TFCO, Kara Thrace was promoted to Director of Starfleet intelligence for the Fourth Fleet midway through 2387. With her promotion, Kara assumed direct command of the Cairo to serve her purposes with the intention of keeping Roman on as its Commanding Officer however, Starfleet had other ideas. With 93’s re-positioning of its forces along the newly created RTZ, Roman was assigned to the newly launched USS Astute to oversee Starfleets assets in the traingle region. Specifically assigned to be at the disposal of TFCO of 93 due to his prior experiences and knowledge of the Klingon Empire, Roman was tasked with keeping this legendary alliance alive.