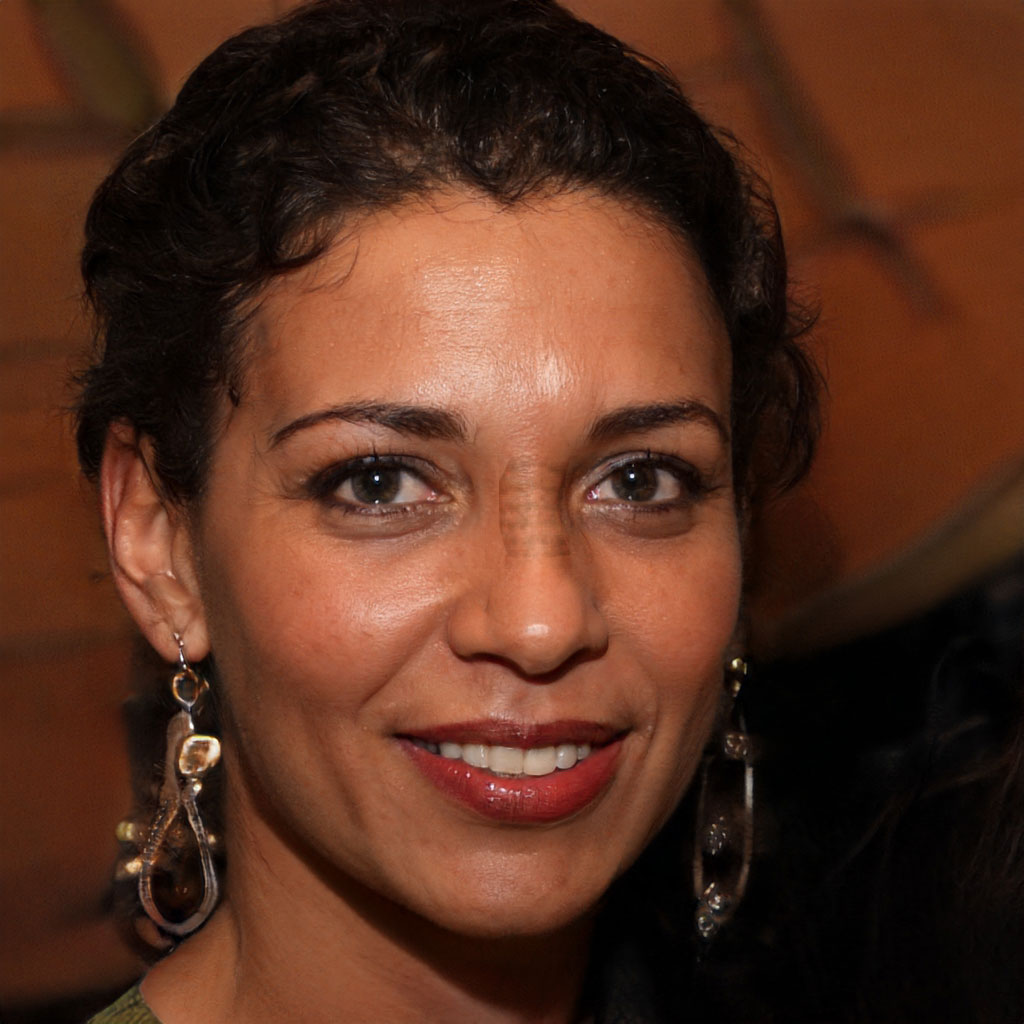 Libran was born on Bajor, to a freedom fighter mother and a human Starfleet father. She has worked in many fields, and made a late-in-life transition to Starfleet Academy.

“[Cadet] Complis has shown a commendable ability to keep calm under pressure, set priorities, and see the big picture. Conversely, she shows little respect for priorities she deems unworthy. Her long career as an archivist will no doubt be a boon to her future posts, as will her intuitive sense of informatics and human-AI interfaces. I simply hope her future COs can handle her criticisms. They’ll certainly be well-grounded.”

Complis Libran is a Bajoran-Human archival scientist and administrator with specialized expertise in knowledge organization, AI interface studies, socio-cultural studies, and some areas of xenohistory, particularly the history of libraries and archives.

She joined Starfleet after an extensive and well-respected, if sometimes controversial, civilian career, matriculating to Starfleet Academy at the age of 38. Motivated to expand knowledge in her areas of expertise, her commission in Starfleet was sworn with a mind toward her personal goals, which Complis felt aligned broadly with those of Starfleet and the Federation.

Often seen as calm, even-tempered, and relaxed, she is also well-known for her ability to lose herself in research and work, to be occasionally hedonistic, and to be regularly iconoclastic, even combative. This combination of factors was shaped by her upbringing to some degree. Her father, Maury Morris, was a non commissioned member of Starfleet who was ultimately dishonorably discharged after going AWOL. It was eventually revealed that Morris had joined the Bajoran Resistance and was involved in guerrilla operations with the Bajoran groups. In 2356, he secretly married Bajoran Resistance member Complis Arean. Libran was born the following year, just before her father was killed during a Resistance assault on a Cardassian weapons convoy.

Morris’s dereliction and eventual discharge, known as the Morris Incident, is not well known within Starfleet, but was a notable event in UFP-Bajor relation prior to the Cardassian withdrawal among contemporary observers and later historians, diplomats, and politicians. The event, and her father’s life more broadly, also helped develop a natural skepticism of the Federation and Starfleet for much of Complis’s life, even through her course at Starfleet Academy.

“According to both Starfleet High Command and Federation Central, a light touch was required in all relations and encounters with both occupied Bajor and the successive Cardassian regimes. This did not, however, stop a number of enterprising Federation civilians — and even active Starfleet personnel — from becoming involved and entangled in the resistance struggle. One notable example is Master Chief Petty Officer Mauricio “Maury” Morris…”

Complis Libran was born 24 October 2357 in Jalanda City, Bajor. She was born to Complis Arean, a deputy in the city Resistance, and Mauricio Morris, a noncommissioned Starfleet officer who specialized in xenoacoustics. Her birth is one of the first recorded instances of a Federation citizen born on Bajor.

Mauricio Morris was born in 2330 in Mogadishu, Earth. Maury, as he was almost always known personally, was the son of two human parents: Mel Morris, an artist and musician from Mogadishu, and Swati Mukherjee, an educator originally from Rajasthan, India. Maury was accepted into Starfleet in 2352 and accepted a position as a xenoacoustics specialist in the structural engineering division on the USS Helmholtz.

“I’ve known many Starfleet officers who let their personal concerns override their duty. I’d even say — and I know you have a holorecorder running — I’d say it’s more common than you’d think. And people do that, skirt their duty, for all sorts of reasons. Greed, boredom, personal predilection, I don’t know. There are experts for that.

But I don’t have to be an expert to say this. Despite the fact that I think he earned a dishonorable discharge, I also think he broke with duty to follow his conscience. And I don’t know if I would have done anything different were I in Chief Morris’s position. So, put that on the recording.”

While serving abroad the Helmholtz, Morris became aware of the Cardassian occupation of Bajor and subsequent activities of the Bajoran Resistance. He closely followed Federation policy regarding Bajor, and felt the UFP response was lacking. In 2355, he began developing plans to visit Bajor, despite restrictions for Starfleet officers and standing Federation policies.

During scheduled shore leave in early 2356, Morris disembarked Starbase 310 on the civilian freighter Princess of Setlik III, which violated Federation orders by traveling to occupied Bajor. After the Princess of Setlik III successfully ran the Cardassian planetary defense perimeter, Morris transported to Jalanda City, where he joined a group of intersystem volunteers. This group, according to recently revealed evidence, acted as a kind of auxiliary force for the Jalanda City Resistance cell and proto-militia and various other Resistance groups across the planet.

After assisting in an operation to destroy multiple Cardassian subspace receiver arrays, Morris became romantically involved with one of the Bajoran mission specialists, Complis Arean, an encryption expert. They married in a secret Bajoran ceremony in late 2356.

Complis Arean was a native of Jalanda City, born in 2328, and had been involved in the Resistance since childhood. Her parents, Morad and Kih, helped organize the initial Jalanda City resistance in 2319. After the Cardassian Union had control of the planet, they continued to work to establish and connect the planetary Resistance movement. They married in 2322, and remained together throughout their lives, raising Arean together after her birth. Arean formally followed her parents into the Resistance in 2344. In her time with the Resistance, she gained a reputation as one of Bajor’s best cryptographers, lending her expertise to many successful operations.

In 2357, she gave birth to a daughter, Complis Libran. Maury Morris was killed just a month later, while acting as a signal jammer in an ultimately unsuccessful attempt to destroy a Cardassian weapons convoy led by the CDS Grouthak. The operation left 14 Bajoran and 25 intersystem Resistance members dead, and 4 ships destroyed, while the Cardassians only sustained minor damage to two freighters.

Complis Arean continued her involvement in the Resistance alongside Libran after Morris’s death, eventually earning the provisional rank of major in 2367. She resigned her commission at that rank when the occupation ended.

After the Cardassian withdrawal in 2369, Libran and her mother moved to New France, where Libran completed her secondary schooling, specializing in information studies. While she possessed her mother’s aptitude with information coding, ordering, and encryption, she melded this with her attempts to understand her unknown father’s love of culture, society, and politics, as emphasized over the years by her mother, colleagues, and acquaintances.

In 2375, she enrolled at the Ranganathan College of Information Science at Nehru Colony, where she studied library science and information studies and took part-time work at the college’s Jendra Memorial Library.

In 2376, Complis was temporarily dismissed from Ranganathan College. That year, a new college policy determined that a number of holorecordings documenting the Nehru Colony’s foundation and settlement were to be digitally scanned and stored locally, but the original physical holoprojectors would be transferred to Memory Alpha, part of a number of changes in the region following Bajor’s ascension to the Federation. Complis led the student protests against the move, telling a Federation New Network interviewer that the move was “part of a pattern of de-localization and de-indigenization that we have seen far too often in the periphery of the Federation. Why should they get to preserve our history? Why not us?”

As part of the protests, students stole several crates of isolinear chips from a local Federation civilian warehouse, setting fire to them at the center of campus beneath a banner that read “End Cultural Theft Now.” While there was no evidence that Complis was directly involved in the incident (and the isolinear chips were unused blank storage chips), as head of the student movement, she was dismissed for three months and forced to re-apply during the next enrollment period.

Complis’s early civilian career was marked by fluctuation. In late 2382, after brief stays on Earth and Bajor, she joined the New France Federation School System as a staff archives administrator. She found the work unremarkable, and struggled to connect her data-based cataloguing work with the education happening in the school system broadly.

She took a hiatus from and eventually left the school system in 2384. After the further success of a second documentary, India After Khan, and the curation of a related archive called the Singh Center on Earth in 2386, she was invited to become a civilian researcher at the Federation’s Memory Alpha Cultural Institute.

Complis began her career at Memory Alpha as an information architecture technician in the New Holoprojects Repository, a part of the MACI. By 2388, with the help of her newfound mentor Dr. Li Na Chan, she founded the Federation Holodocumentary Project meant to preserve various holorecordings, both contemporary and historical, from all Federation members.

In 2391, Complis and Chan’s work led to the permanent establishment of the Federation Holodocumentary Archives at MACI as well as the biennial Memory Alpha Cultural Institute Holo Festival.

Chan was a guiding light not only within her field and at Memory Alpha, but served as a strong figure in Libran’s life and career. Their work together continued until 2393, when both Chan and Complis were involved in a shuttle accident. Complis was able to recover from her injuries, but Chan, who piloted the shuttle, did not survive. Following the accident, Libran returned to Bajor for recovery and physical therapy. During this time, she stayed with her mother, who was herself ailing from a common Bajoran heart condition. Complis Arean died that same year during Libran’s stay on Bajor.

Deeply affected by these events, she resigned from her position at MACI. After a long personal sabbatical, she applied and was accepted to Starfleet Academy in 2395.