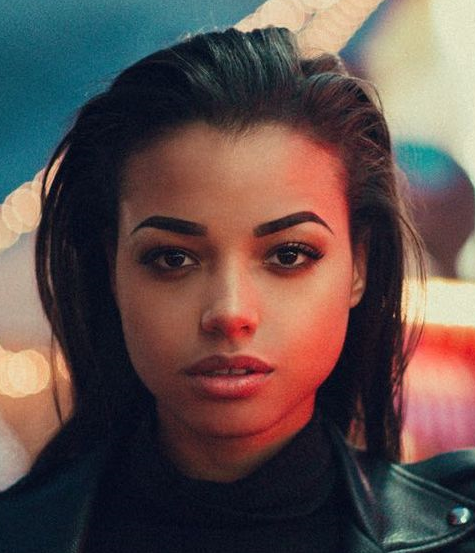 Alexandra Sudari-Kravchik is one of the newer generation of Sudari-Kravchik's to enter into Starfleet and attain a lofty position, a tradition started by ancestors during and just after the First Federation-Klingon War.

For many in the Federation, Romulan refugees only started arriving in Federation space circa 2381. This is simply not true, for Romulan refugees have been slipping into the Federation for decades prior. Most were regrettably never made to feel welcome though were content to find a corner of the universe somewhere they could call their own aware from the omnipresent Romulan state apparatus or it’s technicians of orthodoxy – the Tal’Shiar.

For a young Romulan woman, Vanesh, however things were slightly different. When her father had earned the displeasure of a prominent Romulan politician for a failed military adventure, it was her simple good luck of being off Romulus at the time that saved her life. In a desperate race against the Tal’Shiar, sympathetic family members smuggled the young woman out of the Empire.

Whether luck, fortune or good old fashion graft that guided their flight, Vanesh made it into the welcoming arms of the United Federation of Planets and specifically into the customs patrol along the Neutral Zone being conducted by the USS Upham. This chance encounter would, years later and after numerous correspondences and rendezvous, result in the marriage of a then Lieutenant, now Commander Joshua Sudari-Kravchik to Vanesh Tolrin.

This had the rather unfortunate side effect of stalling Commander Sudari-Kravchik’s career in Starfleet as centuries of mistrust were difficult for Starfleet Command to simply put down. No unique opportunities, no sensitive jobs or projects would accept him, even when he applied for positions on the far side of the Federation from the Romulan Star Empire. The concerns and worries that he was now either a willing or unwitting source of information to the Star Empire precluded his participation in exciting opportunities or sensitive tasks.

As the year 2360 came into being, Commander Joshua Sudari-Kravchik accepted being placed on the Reserve list and re-entered the civilian sector by returning to the Sudari-Kravchik family home on Archer V. Now a sprawling compound of extended families, Joshua and Vanesh were welcomed back with open arms and soon helped into local jobs.

Vanesh continued with academic study as she had ever since arriving in the Federation, becoming a keen and critical writer of the Romulan Star Empire while Joshua went on to become a Park Ranger with the Archer V Planetary Park Services. While not offered any positions within the Department of Foreign Affairs, Vanesh was regularly consulted by the Romulan Affairs Office for insights. As years passed suspicion around Vanesh slowly dissipated with the rigour of her writing and firmly anti-Senatorial and anti-Tal’Shiar positions.

Late 2365 saw the arrival of a newly born Alexandra T’Rin Sudari-Kravchik into the world. The Federation was safe and prosperous, peace was growing more and more stable across the quadrant – in the eyes of both parents this was the perfect time to bring a young life into the cosmos.

A few short months later things would change – the Battle of Wolf 359.

Starfleet was desperate for trained personnel to return to duty. It was desperate to reactive old starships and present a strong front to its peer and near-peer competitors. Starfleet had now changed its view on one Commander Sudari-Kravchik and offered him a command upon his return to duty, commanding none other then the recently refitted and reactivated USS Upham.

Growing up in this aftermath, Alexandra knew her father more as a face on a screen and occasional visitor. Her mother would also continue to work on her academic career, occasionally disappearing into month long writing or research binges. So, while mother and father were both absent at times, the Sudari-Kravchik clan made sure that Alexandra was never wanting for mother or father figures.

While her mother and father both insisted on a more traditional education regime, with the help of willing teachers, aunts and uncles with various unique (and occasional outmoded) skills sets, Alexandra charted a somewhat different educational course. She neglected the sciences in favour of engaging with student body politics, or diving into sports with the intent of being a more well-rounded individual versus her parent’s intention of academia.

By the time Alexandra was old enough to apply for Starfleet Academy she was what she wanted to be – the model student. Well written application letter was supported with a list of decent academic successes, a track record of student politics including Student Body President in her final year and a collection of sporting achievements to go along as an afterthought.