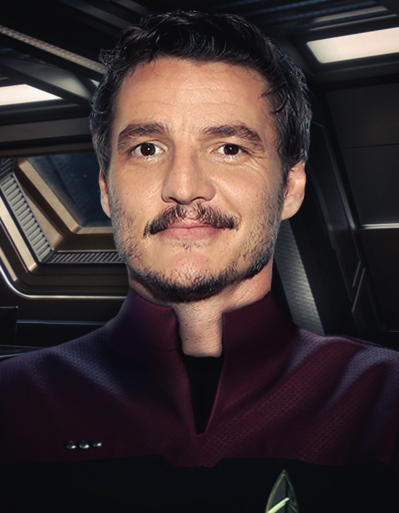 A seasoned officer, Commander Reyes is respected as a thoughtful leader and excellent logistician, with a particular talent for putting a friendly face on everything he does. This has made him popular with colleagues and, while not a formally trained diplomat, regularly puts him on missions which would benefit from compassion, kindness, and good humour from Starfleet. His career has been slow for his talents for two reasons: he is a dedicated family man who would rather progress slowly through the ranks than be separated from his wife and children, and he is a perpetual champion of the underdog who has railed against Starfleet pragmatism over the last fifteen years, likely a result of being the child and sibling of long-dead Maquis members.

Javier was born on Hakton VII, a human colony destined to be sacrificed to the Demilitarised Zone when the Federation brokered its peace with the Cardassian Union. His early childhood was happy; his community was vibrant and his large family, of which he was the youngest, was loving. Embedded in colony life, they were among the many to protest the forced relocation demanded by the treaty when he was in his early teens.

Most of his family remained, including his parents, falling in with the Maquis, while his older brother Ivan was charged with taking care of him and his sister Angela in the new homes offered by the Federation. They would never see the rest of their family again, all of them killed either in the ongoing Maquis struggles or when the Dominion’s aid brought a decisive end to the movement.

The rest of Javier’s childhood was spent on a Federation settlement in the Thuecho system, built to house refugees like him. In true Federation fashion, it provided everything he needed – shelter, education, structure. But it was built of prefabricated materials, official Federation support programs, and disenchanted refugees, while his home on Hakton had been a colourful colony with its own culture and traditions. But as the youngest, he still had less resentment towards the Federation than his elder siblings. They argued bitterly with him when he expressed a desire to join Starfleet, but he was convinced the Dominion War had changed things – proven the cause of his parents right – and been mellowed, no doubt, by five years of attentive Federation education.

He was a dedicated student at the Academy; easily liked and eager to make friends, he graduated high in his class, with comments from instructors that he still could have done better if he had applied himself more to his studies and less to his parties. Reyes seemed satisfied with his compromise and, eager for adventure, secured his first assignment on the five-year exploration mission of the USS Callisto, one of the new Luna-class starships.

As an Operations Officer and later Quartermaster of a ship on such a dedicated mission, Reyes accrued significant experience. He had a natural talent for understanding the logistics of running a ship, mindful of a community’s needs, and became something of an unofficial morale officer for the junior officers as he organised regular social events. By the time he was quartermaster, he was his department head’s first choice of a junior officer to send to negotiate or arrange supplies or exchanges with alien ships and settlements, for he was good at putting a friendly, likable face on Starfleet professionalism.

Towards the end of the Callisto’s mission, he was offered a promotion and a posting to head the Operations department at a Starfleet frontier station, Outpost Ganymede. Starfleet had given the post more resources as they helped a member world recover from a massive, near-apocalyptic planetary disaster, and Reyes was selected with his head for logistics and likelihood he could deal with fraught and worried people.

It was here he met Evalina Slater, a journalist covering the crisis. While Reyes had always been a bit of a flirt, the two hit it off immediately. The relationship deepened more than anticipated when they found out barely a year into the relationship that Evalina was pregnant, but after discussion, they decided to commit to what life had given then. Reyes was quick to assure Eva that he would not let his career get in the way of family, mindful of how his own parents had left him for a cause.

When the Outpost Ganymede operation was finished, he thus took an assignment at Starbase 11. It was a stable billeting, the station braced to assist for support operations in the Romulan evacuation, and as a bustling hub was a good posting for an officer with a family. Their daughter Sofia, named for Javier’s favourite sister that had died in the Maquis, was born not long after. A year later he and Eva were married in a celebration that allowed him to reconcile with his estranged siblings.

Reyes’s career hit a setback with the Attack on Mars and the subsequent abandonment of the Romulan evacuation. Having assisted many of the refugees himself, he sent formal complaint after formal complaint, even as a lowly lieutenant, and of course got nowhere. Old bitterness at how his homeworld had been treated by the Federation fifteen years earlier was hard to forget, and his obvious discontent as an officer likely kept him in grade for longer than expected for an officer of his talent. His son James was born in this time.

It was Eva’s suggestion he move on from Starbase 11. While she had pursued hundreds of opportunities for stories and research in her time, she saw her husband become more embittered about the work she knew he loved. Taking a gamble on her own career or even their family cohesion, she urged him to put in for transfer to an exploratory mission – even though with the wrong posting, she would be bereft of work or unable to follow him with the children.

But Reyes waited a year for the right assignment and received it when his old captain from the Callisto approached him, now the commander of the Odyssey-class Saratoga, which was destined for an exploration mission along northern regions of the Beta Quadrant where Starfleet had been unable to expand without Romulan objections. With this no longer an issue, a ship of this size could operate as a central hub for a vast scientific undertaking still in some proximity to Federation space. And above all, a ship of this size was a floating city where he could bring his family.

Now a Lieutenant Commander and Chief Operations Officer, Reyes jumped at the chance. He found that many of his fellow officers, explorers and scientists rather than the politically-minded staffers he’d dealt with at Starbase 11, shared his unhappiness at the Federation’s withdrawal. While they were the minority in the fleet, here they could do what Starfleet was designed to do, and the Saratoga crew became a close-knit unit trying to further the bounds of scientific understanding and make the galaxy a better place.

But while Reyes thrived, he knew his wife was bored. She took the time to write some books, publishing some hard-hitting political works that were unkind to Federation members who had turned their backs on the Romulans, and writing articles where she could when the Saratoga took them somewhere of interest to a journalist. But six years was a long time to be out of the Federation. When he was promoted to Commander, Reyes was offered another tour on the Saratoga, but turned it down for a different posting.

Deep Space 16 was on the opposite end of the Quadrant, at the fringe of Federation space with proximity to Orion Syndicate operations. A smaller and scrappier station than Starbase 11, it was still a posting where he could keep his family, and as executive officer on a frontier, Reyes knew he could make an impact in keeping people safe and making their lives better. It was also a considerably better prospect for his wife’s interests, even if it was far from his best choice for his career.

Superiors felt his decision exploded in his face on two counts. The first was when a different department head on the Saratoga was made Executive Officer, a job they suggested was Reyes’ to turn down, and far more important than his current one. This was further supported when that officer had their own command by 2398. The second explosion came in 2397, when his wife published an exclusive, hard-hitting article exploring where Starfleet had failed in its local protections of civilian traders – and where it had prioritised seemingly which companies had more core world, political connections, rather than which were more vulnerable.

Reyes was investigated for possibly leaking information to his wife, a suspicion of which he was cleared. It was still something of a black mark on his record, and nobody was mollified when he was proud and protective of Eva’s work. His trust as executive officer took a hit, and his CO rather transparently tried to get rid of him. With a record as solid as his, it would be hard to move Reyes anywhere but up – but Reyes refused to take a posting where he couldn’t bring his family, and even turned down command of a Diligent-class on those grounds.

His posting to Guardian Station is thus, at best, lateral. He is more than qualified to serve as Senior Officer of the Watch, and such a post on one of the biggest starbases in the Federation has responsibility perfectly comparable to that of XO on a Deep Space outpost. But it lands him lower in the chain of command, in less of a position to be noticed, and for an officer who has the talent and record for his command, it is far from an ambitious way forward.

But Javier Reyes seems happy enough with his situation. Guardian Station is a perfect assignment for his family, where he can be with his children and they can live in a community as they receive an education, and where his wife can find trouble to stick her nose in. And while he is a consummate diplomat, a solid leader, and an expert manager, his politics – above all, his burning sympathy for the underdog – often put him at odds with the elite of Starfleet, with whom he might have to interact in this more prestigious billeting.