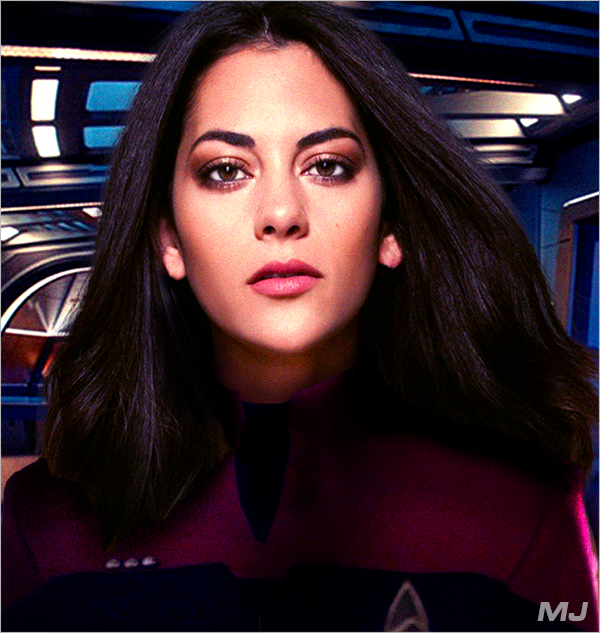 Tikva Theodoras is one of Starfleet's many rising stars who has dedicated herself to delivering the best service she can while grasping at every opportunity that presents itself to her. She now finds herself recently promoted to the rank of Commander and given command of the Argonaut class starship USS Atlantis, assigned to Task Force 38 of the Delta Exploration Initiative.

Born in Athens, Greece, Tikva is the only child or Drs Ballis and Mikou Theodoras and as such didn’t want for much in her early years, especially considering her mother was a specialist in early childhood education. While Tikva never found herself under any form of pressure, both of her parents instilled upon her a desire and quest to seek out opportunities to learn and develop herself and those life lessons have stayed with her to this day.

A naturally gregarious child, Tikva never sought to be the middle of her social circles, she just ended up there as she self-organised her friends, or dragged them along with her. Her study habits also persisted and she finished high school as head prefect and valedictorian.

While both of her parents had gone into academia and achieved success, Tikva decided to launch herself in a different direction and forge her own path. Instead of her choice of universities across Earth and a few on other Federation worlds she could have attended, Tikva applied for Starfleet Academy, passing her entrance exam with ease.

Tikva’s sophomore year was focused on diplomatic resolutions with an elective in psychology. Her junior year she focused on helm operations and personnel management papers, having decided to persue starship command at the earliest opportunity. Her fourth year she spent continuing with personnel management and leadership papers as well as a general sciences papers to expand her base knowledge.

Graduating the Academy Tikva found herself on a series of assignments, leaping at each opportunity to take on more responsibilities, be it on or off duty. Once more she started to drift towards the middle of her social circles with her seemingly endless supplies of energy to keep her going.

In 2392 Tikva achieved her desired goal of independent command while only a Lieutenant, being assigned the Saber class starship USS Haida in recognition for services rendered on her previous command. Haida served as a patrol and coast guard vessel along the Romulan frontier. Never more then a few hours or a day at warp from more capable vessels, Tikva used this command experience and the ability to call upon senior officers for advice as a chance to really stretch herself and ensure that this was what she wanted.

Come 2394 and Tikva left her own command to take on responsibilities aboard the USS Trafalgar and the mentorship of Captain Ricta Denevan. During her time aboard the Trafalgar she was critically injured in battle against Gorn Radicals hoping to provoke a war with the Federation that neither the Federation or Hegemony wanted. Despite severe damage to the ship, her flying skill was able to see the Trafalgar escape it’s ambush and warp away, saving ship and crew, but very nearly costing her own life. Because of this act, once the Trafalgar was repaired and recommissioned, Captain Denevan offered Tikva a position as his XO.

After three years serving as Executive Officer for Captain Denevan, overseeing numerous exploratory missions and even being Starfleet’s representative to a couple of minor diplomatic outreach efforts run by the Diplomatic Corp, Command pulled out the center seat once more for a newly promoted Commander Tikva Theodoras and assigning her to the USS Atlantis.