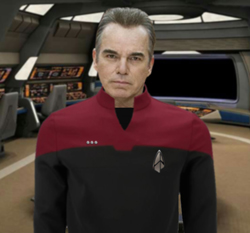 Commander Paul C. Gordon is the commanding officer of the Defiant-class U.S.S. Avenger/NCC-74206. He is a veteran of the Battle of Sector 001 in 2273 and the Dominion War, and has served as an instructor at Starfleet Academy, teaching starship operations. Prior to taking command of the Avenger, Gordon served as first officer of the Nova-class U.S.S. Tereshkova/NCC-77385.

Paul C. Gordon was born in 2348 in the agricultural community of Prairieview on Cestus III. His family had lived there dating back to the first settlers in 2267, following the Gorn ceding the star system to the Federation. The Gordon family ran a solar farm, which provided some of Prairieview’s energy needs. When he was old enough, young Paul Gordon rode with his father or mother on a skimmer for daily inspection of the solar panels. As he grew up, he took more of an interest in the operation, devising ways to do the inspections more efficiently, and even boost the output to the farming community.

One of his mother’s childhood friends was Lieutenant Sean Nolan, an engineer on the U.S.S. Zhukov/NCC-26136. During a visit to the Gordons’ home when Paul was 13, Sean was impressed at the youngster’s grasp of logistics related to the solar farm. He put the bug in Tom’s ear about a starship being a bigger version of a solar farm, with more challenges and greater rewards. Paul was particularly taken with the idea of traveling around the galaxy and visiting new planets no one had ever heard of. He continued to excel on the solar farm, and when it was time to apply to Starfleet Academy, with now Lieutenant Commander Nolan as his sponsor, he sent his application.

Sadly, he was not accepted that term, but with an encouraging note from the admissions officer to reapply the following year, he took every opportunity he could to snoop around some of the freighters and passenger transports that landed at the nearby spaceport. On one such visit, a Bolian cargo ship master named Nerik invited Paul aboard to give him a tour. Nerik was impressed with Tom. What he lacked in practical experience aboard a space vessel he made up for with curiosity and enthusiasm about what it took to run a cargo ship. He offered Paul a job on the spot – engineer’s mate. It was the bottom rung, to be sure, but it would put Paul in space before those cadets in his age group who were already a year ahead of him at Starfleet Academy. After his parents reluctantly agreed, Paul shipped out with Nerik on the cargo ship Helija Bolarus – literally Basket of Bolarus – having signed a one-year contract to serve on the crew.

During that year, Paul immersed himself in learning all aspects of the ship’s operations, from the hows and whys of scheduling cargo runs to power distribution to how not to get bored during long durations in warp between destinations. He also met a few of Nerik’s less-than-savory contacts among galactic smugglers and other ne’er-do-wells. That year turned into two years, then three. Toward the end of the third year with the Bolian, Paul spent most of that year, at Nerik’s insistence, studying for the Starfleet Officer Candidate Program entrance exam. If he was successful at that, he’d be commissioned fully one year before he would have had he reapplied and been accepted to Starfleet Academy.

The three years he spent serving Nerik paid off, and when the Helija Bolarus landed on Alpha Centauri, Paul left the ship and reported to the Starfleet Training Center there for his indoctrination. After 12 months, he earned his commission as an ensign.

Tom’s first assignment was a lackluster two years aboard the Constellation-class U.S.S. Victory/NCC-9754. The ship was nearly a century old by the time Paul got to it, and even though his billet was technically as a junior engineering officer, he found himself splitting time between his those duties and shifts on the bridge at operations, and generally helping keep the Victory spaceworthy.

When Paul drew a posting to the Nebula-class U.S.S. Endeavour/NCC-71805, he knew the ship had been engaged in serious exploration and surveying new star systems, and by the time he reported aboard in 2372, the crew was working on exactly that. Although he was not part of the away teams, Paul got to experience being part of a crew for which first contacts were routine. It was a far cry from the rattletrap U.S.S. Victory, and there were many more people aboard the Endeavour. It looked like his career was taking off.

In 2373, however, the Endeavour was hurriedly pulled from its mission and told to report to Sector 001 at once. Paul was transferred to the ship’s tactical department, and found himself right in the middle of another Borg incursion into the Alpha Quadrant, once more in the central system of the United Federation of Planets, Sector 001 – Earth. He had heard of the Borg, as well as whispers about what had happened to U.S.S. Enterprise/NCC-1701-D Captain Jean-Luc Picard during his short-lived assimilation as Locutus. The Battle of Sector 001 was brutal. A single Borg cube cruised into Terran airspace without so much as a “by your leave.” It made quick work of a handful of smaller starships, and the fleet was dwindling. Even the U.S.S. Defiant/NX-74205, which had been designed and built specifically to counter the Borg threat, was getting hammered by energy weapons being fired from the cube. If not for the fortuitous arrival of Captain Picard and the U.S.S. Enterprise/NCC-1701-E, the tide of the battle could have quickly turned in favor of the enemy.

A side effect of so many casualties in that battle was that Paul was promoted immediately following that, and given a bridge shift as operations officer. The Endeavour resumed its peaceful exploration mandate, but that did not last long as a threat from the Gamma Quadrant loomed over the Federation in the form of the Founders of the Dominion and their soldiers, the Jem’Hadar. Once more the Endeavor was called to defend the Federation from the Federation’s enemies. The Endeavour spent the next three years in skirmishes against ships of the Dominion and its allies, the Cardassian Union and the Breen Confederacy. Occasionally, enemy forces would attempt to board the starship, and Paul found himself repelling boarders in hand-to-hand combat. During one nasty boarding attempt, Paul was injured, having been stabbed in the arm by a Jem’Hadar soldier before that soldier was taken down by one of the Endeavour‘s security detail.

The war had thinned out Starfleet’s ranks, and by the time of the armistice in 2375, Paul had been promoted to full lieutenant. This meant more bridge time for him at the ops station and more collaboration with the Endeavour engineering division. It also marked the longest period in his Starfleet career in which he had gone without a promotion – six years. Paul did not mind the promotion drought, indeed his rise through the early ranks was only attributable to battlefield promotions, and he was happy not to have to fight a battle for a change.

He enjoyed his posting to the Endeavour and as he grew professionally there, he was assigned more and more responsibilities. The year 2381 began a 10-year stint for him as the ship’s chief operations officer. He began shipboard training for command candidacy, taking shifts as the command watch officer in the center seat on the bridge. In 2391, he decided to make that his next career, and was accepted into the Starfleet Command Training Program at Starfleet Academy. While there, he doubled as an instructor for starship operations.

Upon completion of command training, Paul was assigned as first officer of the Nova-class U.S.S. Tereshkova/NCC-77385 on science and survey missions in the Gamma Quadrant. When the posting for a captain of the U.S.S. Avenger came up in 2399, Paul applied for and was reassigned command of the Defiant-class starship.