Slyvexs, is a Starfleet Officer and the current Chief Medical Officer of the USS Odyssey. Like her captain, she is a veteran of the Dominion War and served under him on the USS Trinity and USS Triton. She has several degrees related to medicine. Her dry wit and sarcastic nature is well loved by many on the crew, as a result she is able to make many of her patients feel at ease with her humour. Even though she has been a doctor for some time now, she has no plans on retiring (yet) as she thoroughly enjoys being on the Odyssey. 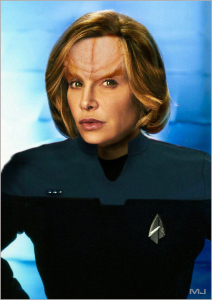 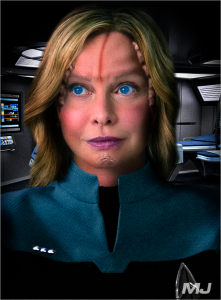 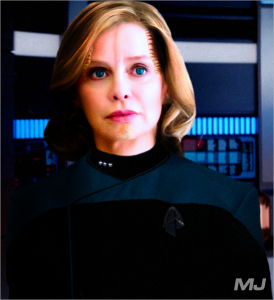 Slyvexs’ typical Denobulan face ridges are almost hidden by her long wavy golden blonde hair. Her forehead ridges are not as prominent as compared to other Denobulan women, this is partly down to her own beauty regime of use of hypicate cream to maintain her almost youthful appearance. A very slender woman, her lake blue eyes can calm down any patient as can her wide smile, but her delicate hands have seen a lot of action under the surgical light, gaining her the reputation for being known on the ship as having the most steady hands.

A talented doctor, Slyvexs is exceptionally knowledgeable in almost every area of medicine. Her years of service, professional development, and research in various fields of study have enabled her with a wide range of skills. As a result, she understands how to deal with almost every medical challenge. She is passionate about her patients and their care, so she only expects the best from her staff when treating anyone who comes through the doors of sickbay. That all said, her colleagues thoroughly enjoy her wit and dry sense of humour. Her sarcasm has cut down anyone who challenges her medical professionalism. That said, she puts those she cares for before herself.

A diligent doctor, Slyvexs loves her work, and this was most probably born from the curiosity that she constantly had as a child. Mixed with how her parents brought her up, Slyvexs enjoys caring for others and is prepared to make anyone she treats feel easy and comfortable in her hands. She enjoys the company of others and is typically seen sharing a meal or a drink with her staff or someone else on the crew. She loves spending quality private time with her family, something she is extremely fond of doing with her third husband, Mettex.

Though she loves her career in Starfleet and has shown a willingness to be more than just a doctor through her command training, Slyvexs is not someone who wishes to run through the ranks. Taking her time and enjoying every experience her way has always been her approach. However, she does have plans to retire to Denobula eventually.

Born on the Denobula homeworld in 2312, Slyvexs, like all Denobulans, came from a big family. She enjoyed the many brothers, sisters and cousins she had around her growing up. Fascinated with science from an early age, Sylvexs would initially study biology before going to university and gaining her doctor’s degree in medicine. Throughout her career, she would achieve many medical-related degrees. By age thirty, she was already married and had three husbands and seven children. A decade later, she had decided to return to her work after being at home caring for her children and a few she fostered.

Opening her private medical practice with former colleagues, Slyvexs remained on Denobula until the late 2360s. She finally realised that she needed to do more, and after travelling to Earth, Vulcan and Andoria with her children for her fiftieth birthday, she chose to apply to Starfleet.

Not needing to undertake the normal four-year course due to her numerous qualifications, Slyvexs was at the academy for half the time it took other cadets. Eventually, she graduated and was given a position on Starbase 375 as one of its doctors, where she could also undertake research.

Being on the starbase was an eye-opener for the Denobulan doctor. She met a range of people and thoroughly enjoyed getting to know different cultures. In 2369, she was part of a relief effort to Bajor shortly after the Cardassian withdrawal. There Slyvexs operated a field hospital to assist the Bajorans. As part of her orders, she remained on Bajor for the rest of the year, helping to support the Bajorans set up a sustainable health care service, especially in the rural areas. By the middle of 2370, she returned to Starbase 375.

The Assistant Chief Medical Officer position came up on the Galaxy-class ship USS Venture in 2373, before the Dominion War started. Wanting to try something new, she applied for the position and was lucky to get it. She remained with the Venture for the rest of the war effort. She turned down multiple offers to stay on the Venture.

At the war’s end, she decided to take a break from it all and resigned her commission from Starfleet but stayed on the reserve list. She returned home and would spend the next decade enjoying family life again.

In 2384, she returned to Starfleet and took on the role of assistant chief medical officer on board the Obena-class ship USS Trinity. Her tenure on the ship would be short-lived, as the ship would end up crashing on an icy world after returning home from an exploration mission in the Beta Quadrant. Her commanding officer, Captain McCallister, was impressed with how well Slyvexs coped under the stress of surviving on the planet until help arrived to rescue them.

Wondering if she had made the right choice in returning to Starfleet, she was again offered a position on the USS Triton as Chief Medical Officer. She turned down the role, citing she was not interested in a senior position. She agreed to be Assistant Chief Medical officer while undertaking research. Captain McCallister, who would command the Triton, was disappointed but pleased to have her with him again.

At the end of 2386, Slyvexs, like the rest of her shipmates, would be again stuck in a life and death situation when the ship attempted to rescue the colony on Kovar and Deep Space 19. During a battle with several Breen ships, the Triton was hit badly, and many of the crew were injured or killed. Working in sickbay, dealing with trauma patients, Slyvexs attempted to save the life of Trill counsellor Daubin Jen. Not being able to do so was so heartbreaking for her. Instead, she was able to save the Jen symbiont but was forced to watch as Daubin, who had sustained a high level of injuries, died on the operating table. To save the Jen symbiont, Slyvexs conducted further surgery to implant it in the only other Trill on board, Ensign Lukiz Smyth. After studying Trill physiology for so long, she successfully saved Jen and ensured that Lukiz was accepted as the new host.

Eventually, the whole Triton crew were reassigned when Starfleet took the ship in for repairs. At the start of 2387, Slyvexs finally gave in to Captain McCallister’s request to become a Chief Medical Officer on his new ship: the Odyssey.

Serving on the Odyssey as its chief medical officer was another eye-opener for the Denobulan doctor. Running her department was just like running her former practice back home. She was a lieutenant commander and a confident officer by this time.

Slyvexs’s third husband, Mettex, joined her on Odyssey as a civilian specialist in astrology. The two shared joint quarters, and she felt like she was home for the first time in a long time. On numerous occasions, her other husbands visited, as did their children, and in 2392, she became a grandmother for the first time.

Wanting to try new things again, Captain McCallister placed Slyvexs on the advanced bridge officer exam. She completed the training easily and would go on to take on a range of other courses and tests to widen her skills as a Starfleet officer and not just a doctor. By 2396, she was promoted to commander and would command the gamma shift twice a week.

Slyvexs, over the years, proved herself a loyal office under Captain McCallister; this was seen when the crew were kidnapped onto an alien vessel at the end of 2399. The ship had been exploring the Delta Quadrant when they encountered what appeared to be an alien ark drifting in space. After exploring the vessel, the crew discovered that its crew’s children were placed into stasis in an attempt to save their civilisation. When the ship’s AI came to life, it took control of the mighty vessel and kidnapped almost every adult on the Odyssey in a bold attempt to have them care for the children. Over a period of two months, it was down to Slyvexs to maintain the health of not just her crewmates but the children and young people they now cared for. Shocked she had not been given any children to raise herself with her husband Mettex, Slyvexs soon realised that if she had been placed in that situation (like so many of her shipmates had), then she may have quickly discovered the deception being carried out by the ship’s AI system. It used its advanced holographic and particle synthesisers to project fake life signs for almost every child and young person, except for two. Slyvexs had blamed herself for being so blind in not seeing this sooner.

After returning to the Odyssey, she was assessed to determine the impact of her imprisonment. Like everyone else, she would undergo a lot of therapy to understand what had happened to them.