Cline Lenjir is a Starfleet officer assigned to the USS Odyssey, his second posting. Lenjir is a talented security officer, but at the Academy majored in Forensic Psychology, and brings this perspective to all of his work. Lenjir became Commander Cambil’s protege and is extremely grateful for her time and effort in mentoring him to become the leader he is today. Unlike other security chiefs on other ships, Lenjir prefers to use science and logic in developing his approaches to problems, that said he is known for always being in the ship’s gym when he is not on duty. 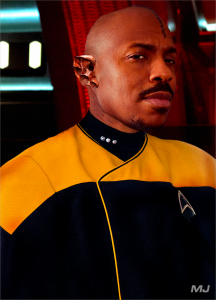 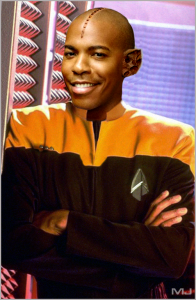 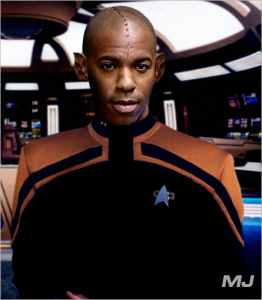 Lenjir is a hearty young man, tall and burly though by no means large by the standards of security officers. He has been considered handsome, partly due to his easy-going manner, charming smiles, and fondness for laughter. Lenjir is just as fastidious about his appearance off-duty as on-duty, preferring to always be at his best, and has occasionally been accused of vanity.

Lenjir is a bright, witty young man, personable and good-humoured. He enjoys being in a crowd, though most especially at the centre of it, and has a talent for finding something of interest about almost everyone he meets. Although professional, he likes to have a friendly relationship with his co-workers, and clearly lives by the attitude of ‘work hard, play hard’. But behind this jocular exterior he has a strong sense of justice, and is fiercely loyal to his friends and comrades.

Adaptable, insightful, and driven, Lenjir is good with people and a flexible, clever officer. He is also capable when it comes to starship tactics and small-unit combat, being in physically good condition and of a disciplined mind. He can, however, be brash and sometimes cocky, is bad at acknowledging his limits, and can be befuddled if confronted with a particularly technical challenge.

Although Lenjir would claim he right now just wants to establish himself as an officer and see what Starfleet life has to give him, he is quietly hungrier than this. Accepting it will take many years, he wishes to advance far in his career, and most especially overshadow his sister’s achievements.

Cline Lenjir was born on Tiburon, the second child of a starship research engineer and a professor of biochemistry. Even by Tiburonian standards, his was an academic upbringing in a household of scientists, though his older sister Isa took better to the expectations and encouragements of their parents. A prodigy in her own right, she sought to follow their mother’s footsteps in advanced developmental engineering, a route she seemed set to excel at.

Cline was not gifted with quite as fine a mind as his sister, though few young people were. In something of a childish overreaction he began to draw away from dedicated academic study and focused himself heavily in school on sports and socialising, though he was bright enough to more than get by. Being a native of Tiburon, his education was as heavily laden with an encouragement of a strong sense of civic justice just as much as scientific pursuits, and in his mid-teens it was this which fired his imagination.

It started a little as a youth’s effort to define himself as different from his sister, though by now the siblings were as different as night and day. Where Isa was quiet and academically driven, Cline was gregarious and easy-going. But his school records were enough that his initial enquiries to Starfleet Academy were well-received, and, finally having a reason to work hard, Cline applied himself with the hopes of being granted a place when he left school.

Lenjir was accepted, and the Academy would prove an excellent environment for the young man. No longer needing to define himself by how different he was from his sister, his privileged background and legitimately bright mind allowed him to apply himself to his studies with notable success. The sense of justice his cultural background had given him was still a driving force, however, and Lenjir pursued a career in the Security Division.

Now with a greater love for study and the sciences, he harnessed this, his skill with people, and his career wishes to shape his Academy Major. Even as a security officer, Lenjir refused to just be ‘one of the crowd’ – he had to go the extra mile. In this case it was to study Forensic Psychology as well as his mainstream security courses, seeking understanding of those he would be confronted with as well as the means to protect others from their harm.

Inevitably gregarious, Lenjir became good friends with his Academy roommate, a young man named Lukiz Smyth. The two shared their bridge operations courses, where they met fellow cadet T’Rani. Despite Lenjir’s raucous teasing of the Vulcan, his amiable sense of humour an inevitable clash with her cold logic, the three became close, a well-balanced trio, and as a strong team they caught the attention of their instructor, Commander Cambil. The three of them graduated together, and at the same time as Cambil left the Academy; impressed with their success, and wishing to encourage their potential, Commander Cambil arranged for them to join her on her new posting.

This posting was the USS Triton, a particularly impressive coup of an assignment for ensigns fresh from the Academy. Now out on assignment at last, Lenjir has thrown himself into his posting with a desire to succeed and prove himself, but also to embrace and experience as much of Starfleet life as possible.

Cline was starting to feel comfortable on the ship. He got to work with his former academy classmates, he got on extremely well with his department head and loved being around a diverse crew. This would all change by the end of the year though. The ship was involved in a mission that would leave it heavily damaged and a number of the crew either dead or seriously injured. Cline led the security teams that rescued those that were trapped when a massive hull breach occurred in the saucer section. For his bravery and gallant effort in saving all that were trapped, Captain McCallister placed a commendation into his file.

While the Triton was taking to the Beta Antares Shipyards for major repairs, the entire crew were re-assigned elsewhere. Captain McCallister, offered Cline a position on the new USS Odyssey, as its assistant chief security and tactical officer. He accepted without delay, especially when he found out that Commander Cambil would be his new department head.

Getting to grip with the ropes of running a larger department was an interesting learning curve for the newly promoted lieutenant junior grade. Nevertheless he seized every opportunity that came across his way and soon found that he was becoming quite a confident officer. Commander Cambil would leave him responsible in running the department when she was dealing with other ship matters as Second Officer.

Regularly he would run drills with his teams and would offer training to others on the crew that wanted to sharpen up on their combat skills. When he wasn’t doing this, then he would be found on one of the holodecks running a tournament that most of the crew were involved or organising a social event.

By 2391, he was a full lieutenant and with the departure of Commander Hawkins, the ship’s XO, to command his own vessel, Cline would succeed Cambil as security chief when she took on the role of First Officer. Over the next eight years, he continued to run the department with excellence, always proving that he was a valuable member of Captain McCallister’s crew. In 2399 he was promoted to lieutenant commander.